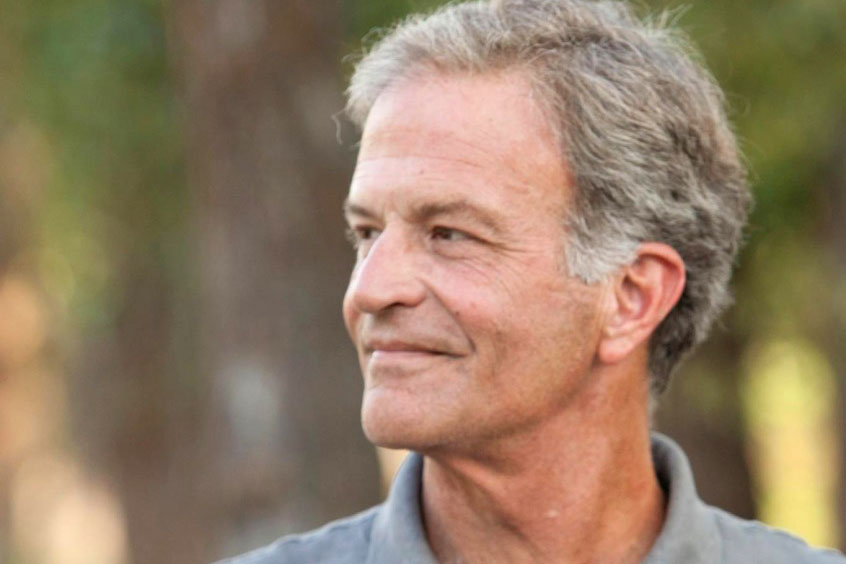 This month Book-It premieres Dog of the South, their adaptation of the comic novel by Charles Portis, author of True Grit. In the book, hapless protagonist Ray Midge sets out to find his wife, who has run off south of the border with his Ford Torino and his best friend. Along the way Midge encounters a cavalcade of oddballs including Dr. Reo Symes, a scam artist looking to reach his missionary mother in Honduras to talk her out of a piece of land in Louisiana. It’s a wildly eccentric road story that’s been hailed as Portis’s true masterpiece.

For this production, Book-It brought back Judd Parkin, the LA-based screenwriter and producer whose previous adaptation for Book-It, 2013’s Adventures of Huckleberry Finn: Uncensored, received critical acclaim. Parkin, as it happens, is one of a growing number of Portis devotees (Portis-heads?) who regard the novelist as one of the great comic voices of the twentieth century. (See Parkin describe his devotion in this letter to the cast and designers of Dog.) I talked to Parkin about the joys and difficulties of adapting this unique work to the stage.

In my research, I found out that there are genuine Charles Portis superfans out there.

It’s funny. I felt like a lonely cult of one for a lot of years until Overlook came out with his books. The people I ran into who knew his work were few and far between. He was mainly known for True Grit and that was it. I saw the John Wayne movie when it first was released and, being a young movie enthusiast. I bought the tie-in edition of the novel and never read it until years later. I just picked it up and it was one of those moments where you go, “Holy shit! Why didn’t anyone ever tell me what a great book this was?”

What is the quality that makes you go from being a fan to a staunch true believer and cultist?

You come across a voice that just speaks to you, for whatever reason. It’s happened a few times in my life, particularly with comic novelists. I’m a sucker for first person unreliable narrators—I love that form. When I read Portis it was like, “My god! This is as good as Ring Lardner and Twain!” He creates a world and a reality and a consistency of character.

When you hear a voice that rings true for you in every single way, how do you not fall in love with that? It’s so distinctive. I can’t think of anyone else who writes like Portis. You could read an isolated page and say, ”That’s Portis.”

It’s got to be intimidating to adapt that voice to the stage.

It’s as bad as or worse than [Book-It’s adaptation of] Huck Finn was a couple years ago. You sit down and look at it and there’s that moment of terror where you go, “How can I do this justice?” That’s the challenge, what we call the sweet agony.

Jane [Jones, co-artistic director of Book-It] used to kid me, “Imagine how I felt when I get your script and I read the stage direction ‘and then the steamboat hits the raft.’”

“Your problem, Jane. Figure it out.” [Laughs] And she did.

We had a lot of the same challenges with Dog of the South. All of Portis’s books in one way or another are travelogues, journey stories.

How do you capture that propulsion?

By suggestion. The first half of Dog of the South they’re in the car. You just have to break that up. We did that with Huck Finn too—there were extended sequences of Huck and Jim on the raft, and we can’t have them on this little six-by-eight wooden platform for a half hour. So you find ways to break it up. You have to take some liberties.

You also write screenplays, so as you’re sitting down to visualize this, maybe you’re thinking: “Oh, a nice long tracking shot.”

Years ago I started tried to write Huck as a screenplay and just gave up because it’s why Gatsbyand a lot of other first person narratives don’t work as features. Even in the Coen brothers’ True Grit, which I liked, they didn’t do much with Maddie’s voice, and that was a disappointment. Yet I’m sympathetic to the movie because you can’t have wall-to-wall talking, you can’t have a voiceover all the time.

It’s been a really interesting experience because stage time is obviously very different than screen time. Onscreen, a quick montage and you get a sense of a long journey. I’m always surprised at how little you need in stage time; you can suggest a lot with a little. Jane’s been a great instructor in that. She invented this form and she knows it better than anyone.

As a writer, you’re really popping the hood on Portis’s writing. I’d imagine that would give you some extra insight into the mechanics and the language.

The comedy and the tragedy of this story is that everybody has a different god. Midge’s is rational. He tries to understand the world in empirical, rational terms. He meets up with Reo, whose god is gold. Then they meet Ms. Symes, Reo’s mom, this crazy born-again who started a mission in Honduras. Everyone has a different god that they worship in their own way. They don’t communicate; they talk at each other.

But going back to your question, what Jane and I wrestled with at the beginning: What’s this about?  You can allow yourself the luxury of going off topic a few times, that’s the fun of these stories where there’s a little episode or vignette that pops up, but ultimately you can’t stray too far. That’s the pain of doing a book like Dog of the South. You end up being ruthless and cutting whole characters and big sections. There are three or four episodes that are hysterically funny in book form, but to do them [onstage] it’d just bog everything down. You have to get to the conclusion of the main arc.

And now you have to submit yourself to the same sort of judgment from other superfans that you might have levied on the Coen brothers, for example. The shoe’s on the other foot.

It’s true. That’s the risk you take and you just go, Oh well. You take your shots. With Huck I was absolutely convinced we were gonna get raked over the coals, because we basically cut the last third of the novel. I thought there would be a few quibbles but no one complained.

I produced a [TV] miniseries about Jesus, and talk about rife. I have a younger brother who’s an Episcopal priest, and I used to lie in bed at night thinking, “If we blow this I’m never gonna hear the end of it.”

You’re used to taking your lumps on these things.

I’m going through that now with Dog of the South. If there’s a Portis purist out there like me who asks, “What happened to this section?” I had to cut it! I feel your pain!