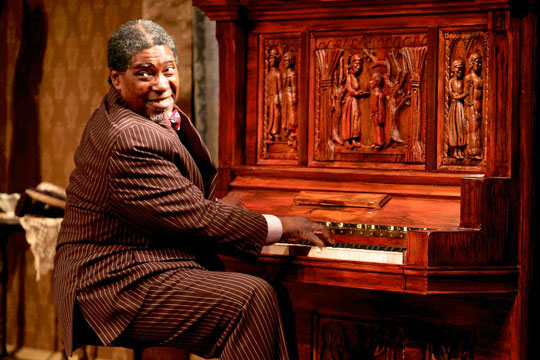 In August Wilson’s The Piano Lesson, at the Rep through February 8, two siblings in post-Depression Pittsburgh confront the brutal legacy of institutional racism in a quarrel over the ornately carved piano of the title, a family heirloom that spans generations. Haunted—literally—by the specter of slavery and hemmed in by harshly constrained possibilities, Berniece and Boy Willie Charles struggle to forge a path forward with rage, humor and music.

Wilson’s play masterfully distills decades of the black experience into the events of a single household. I saw it last Friday (the show was stellar—see Gemma Wilson’s review over at City Arts), and in an effort to tease out a deeper understanding of its historical context and contemporary relevance, I brought along two special guests, social justice organizers who grapple daily with the many still-ongoing issues embodied in the play.

Mijo Lee is program director for the Social Justice Fund, an innovative non-profit that funds community organizing through five states in the Northwest to address the root causes of injustice through grant-making programs as well as political education around race, class and social change.

Dustin Washington is the director of the community justice program for the American Friends Service Committee, coordinating anti-oppression trainings and projects in Seattle and across the country for the People’s Institute for Survival and Beyond, Youth Undoing Institutional Racism and the Tyree Scott Freedom School. He also organizes with No New Youth Jail, the group opposing construction of a new $210 million youth detention facility in Seattle.

Lee and Washington do bold, skillful work directly confronting racism as it exists in 2015. They were both moved by the play (especially the performance of Stephen Tyrone Williams as Boy Willie) and energized to see the historical roots of their work portrayed onstage so pitch-perfectly. As Washington said, “I gotta see more plays!”

We sat down at a bar on Queen Anne afterwards to talk about it.

You both work in racial equity and social justice, so I wanted to hear your take on a play like this. What struck you?

Washington: I thought it captured the time period and showed the dynamics that existed in 1937. A lot of what they spoke of then still plays out today, in terms of the conversations about white people and understanding the ways of white people. It reflected that desperate seeking for place within the American society for black people. Boy Willie captured that angst of being a black man in America and having to struggle to carve out a space and all the tension that can bring up within a family. The play also spoke to the internalization of racial oppression.

It was fascinating for me to experience that play in a room that was 90 percent white and wondering about their interpretation of what was being said and how they maybe would’ve seen this as something that happened a long time ago. I wonder if they could see how they’re connected to the story that was told tonight.

As a white person, I was privy to conversations I would not normally be privy to, which is a great thing about theatre.

Washington: Absolutely. People were let into a secret, sacred conversation, especially in a city like Seattle with the low numbers of African American people. I hope more black people get a chance to catch this play before it closes. The performances were brilliant and it captured a powerful story.

Lee: I identify as Asian, but I am mixed—my mom’s white—so I also have that feeling of hearing a conversation I wouldn’t normally be in and a living room I wouldn’t be in. I’m thinking about how rare it is to see an all-black cast in anything other than a stupid sitcom. I was thinking about Selma and how upset people are that LBJ is not the hero and how disconcerting it is for white people to not have a white person at the center.

I’m always thinking about the potential of art as a tool for social change. It’s more than just creating a conversation and creating awareness. That’s the starting point, but a lot of people stop there. I was imagining what you could do with a play like this if you were organizing around it.

The Rep is actually doing a lot of community engagement events around the play.

Lee: It’d be amazing to see the youth of Youth Undoing Institutional Racism have a conversation about the history of criminalization from slavery until today. What does this little slice tell us about the evolution of police brutality? There are so many threads you could pick out.

Just the matter-of-fact way Boy Willie spoke about being forced to work for a guy—he’s talking about the prison-industrial complex and prison labor.

Washington: They talked about Parchman Farm which is still active and still oppressing people right now. What the play did for me was capture the brutality of racism and the resiliency of black people in the face of it: the sense of humor, the music, the family bonds, the spirituality. Even though they were living in an era of very overt racism in this country they were still able to fully express their humanity.

And the music, those moments of uplift. When things in the play got dicey, music led them out of that—

Lee: The moment where the men are all singing together, that was so beautiful. So much pain and resilience coexisting in that moment. When they all stop and Doaker is the only one singing, it flipped so fast from intensity to humor!

Washington: The show was uncompromisingly black, from the language to the hot comb on the young girl’s hair to the talk of turnip greens and ham hocks and cornbread. The music, the sense of humor; everything was black and uncompromising.

For me again, the question is how is the audience holding that and how did the audience impact the performance? How might the performance be elevated in front of an all-black audience? Not even all-black, even just 40 percent. I wonder. It made me think about growing up on the East Coast—if this was Philly, 50 percent of the audience would’ve been black, guaranteed.

Washington: When you think about internalized oppression and the psychic/spiritual impact of living in a racialized, oppressive society, people responded in many different ways, different modes of survival. He needed to see the glass as half full and she had a sense of “we just gotta survive.”

Washington: I gotta say though, her needing to hold on to that piano and that memory also really showed a level of hope. I don’t know that it’s a binary. There were a lot of things jumbled into the interaction between Berniece and Boy Willie.

Stepping outside of that dynamic, I’m thinking a lot about the talent that was shown on that stage and hoping that talent could be allowed to blossom. I’m thinking about the work we’re doing around juvenile incarceration and racial disparities and the prison-industrial complex. Imagine if more of our young people were exposed to the arts in this way.

And seeing themselves represented onstage.

Lee: My son is eleven and I would love to take him to see this. He just started writing a fantasy novel—he’s about four pages in—and when he introduces the characters, he immediately talks about their race. There are three friends—one is Asian, one is Asian and black, and one is white—and he talks about the food they eat and how they interact. I was fascinated that he did that! I’ve worked so hard to expose him to books that have protagonists of color and it’s not easy. It was interesting to see how that came out in his own creation.

Washington: For me, there needs to be more funding and more opportunities presented to young people. They’re cutting funding for arts and we don’t have enough stuff based in the community. Instead of spending $210 million on a jail, why don’t we spend some of that money to expose people to the arts? It touches souls and emotions in a different way than a training or workshop. The possibilities are limitless.