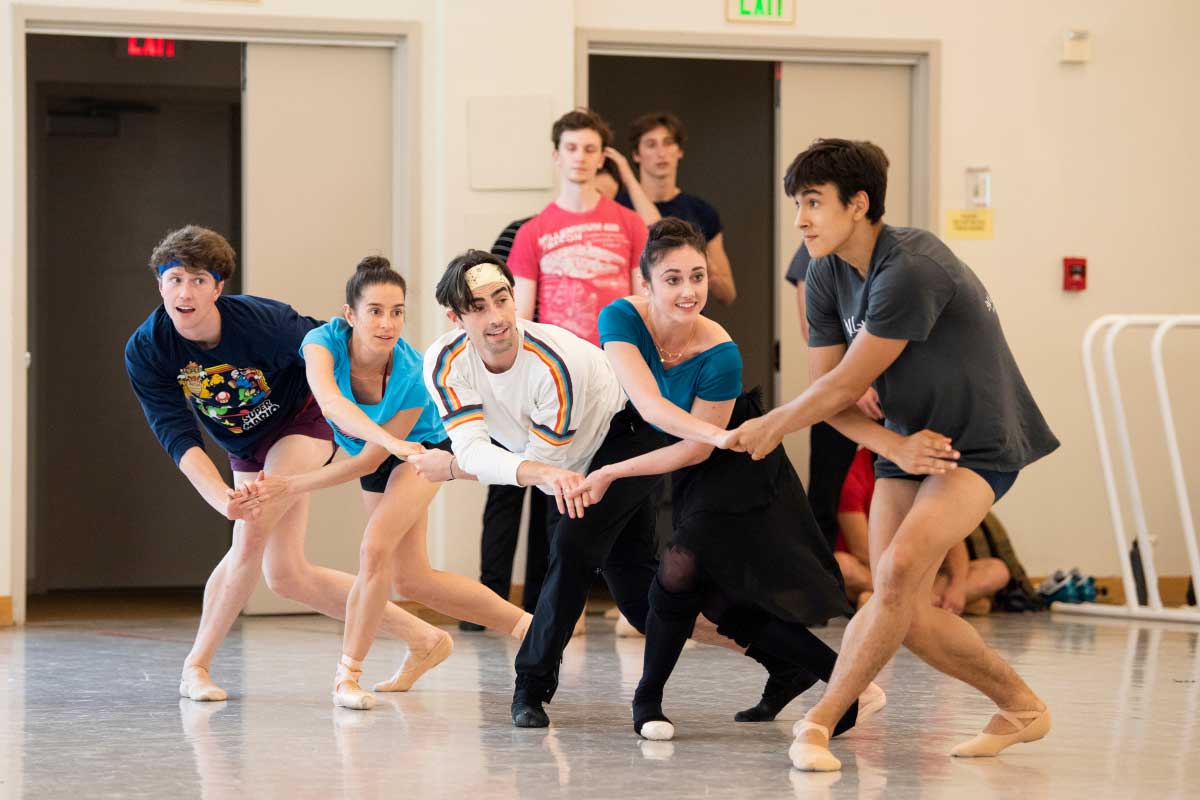 When the curtain rises on Classical (Re)Vision at the San Francisco Ballet this week, the evening might feel a little familiar. The program is made up of pieces of contemporary dance—the ballet is playfully describing it as a “tasting flight”—all originally choreographed for and premiered at SF Ballet. Some of the dances are recent creations, like Bespoke, which Stanton Welch choreographed for the 2018 Unbound Festival, while others premiered decades ago, like Sandpaper Ballet, choreographed by Mark Morris in 1999. No matter their history, one thing is certain: these performances are beloved.

For soloist Lonnie Weeks, Classical (Re)Vision is a homecoming of sorts. Weeks is dancing in two of the program’s pieces: Sandpaper Ballet and a reprisal of Bespoke in a role he originated.

“I am the O.G.,” Weeks said. “I guess if it goes to different places or is performed in the future, maybe my role will always be known as the Lonnie role.”

Weeks originated the role at the Unbound Festival in 2018. And because there’s no expectation to be better than the person before him, his performance has felt freer somehow.

As part of his greater ballet practice, in his world outside of Classical (Re)Vision, Weeks is studying how other artists deal with the pressure of performance.

“I go through phases where things seem to make me more nervous,” Weeks said. “And these phases can be like year-long phases. I’ve been doing some reading to try and help me with nerves and stage fright. And it turns out the most famous performers in the world, like [Luciano] Pavarotti and Renée Fleming—you know, these superstars—they get terrified as well. So, I’m learning that the nerves aren’t going to go anywhere. But what a smart, experienced performer does is he uses these nerves for his benefit. Because they can be detrimental, but they can also give you the edge that you need to stand out.”

Because Bespoke relies on the music of Johann Sebastian Bach—specifically his Violin Concerto in E Major and Violin Concerto in A Minor, the two surviving violin concertos in Bach’s canon—I was curious to know how this music affected Weeks’s performance.

“His music makes me feel like I should be wearing a powdered wig,” Weeks said, “and some sort of fabulous Baroque outfit in Versailles. And that I should be eating petit fours. I feel very prim and proper. And self-indulgent.”

For Weeks, one of the joys of Bespoke is the balance of tender and cheeky moments in the choreography.

And from the sound of it, it’s also a lesson in how to not take yourself too seriously.

“You still have to devote just as much intention as you would with more serious parts,” Weeks said. “Otherwise, it’ll look like you’re just messing around. So, you commit to the cheeky moments just as much as the serious moments.”

“It’s just fun,” Gonzalez said, describing her relationship to the choreography. “You’re not stressing about the steps. It’s just pure fun. And really, the whole piece is about joy and comradery. We’re dancing all together and then we break into small groups and then we do silly stuff that makes us laugh. Sometimes in rehearsal, we’re doing this seriously silly stuff and I’m just laughing with the dancer beside me. It’s a fun piece.”

But just like in Bespoke, there is discipline and form in the lightness. Sandpaper Ballet relies heavily on a formation that the dancers call “the grid,” a precise, almost militaristic square that serves as tension before the silly release.

“You have to be very cautious of the formations and the details of the steps because it’s important for the choreographer to say what he wants to say,” Gonzalez said. “Perfection doesn’t exist, so there’s always something that the ballet master will catch that can make it better, that we weren’t aware we were doing wrong. He’s trying to make us all look like one. We’re trying to look the same, even though we are all individuals. And in ballet, that practice is never ending. There is always something to correct.”

Gonzalez says that she’s looking forward to Mark Morris seeing Sandpaper Ballet in performance, and that she’s hoping his visit comes with an opportunity to improve her performance.

Gonzalez says that she is enjoying this opportunity to dance a piece of choreography that was created specifically for SF Ballet.

“A creative process involves everybody,” Gonzalez said. “Some choreographers come and they know exactly what they want. They have their idea and that’s what they’ll do. Some choreographers come in and it’s like a conversation. There’s that energy from the dancers and what he feels from the music. I like to imagine that Sandpaper Ballet is so joyful and about comradery because of the San Francisco Ballet, because of the company of dancers.”

I asked Gonzalez if that joy she imagines in the 1999 rehearsal room carries through to her experience today. Her answer was a resounding yes.

“Sometimes we’re joking around with each other and just having fun,” Gonzalez said. “And that is exactly what these rehearsals have been like, just fun and joyful. And I like to think that’s the way this company has always been.”

Weeks and Gonzalez were both slated to dance in Hummingbird, a role Weeks was eagerly anticipating revisiting after a 2014 injury barred him from dancing in the premiere as planned. But in light of choreographer Liam Scarlett’s suspension from The Royal Ballet in London and a current investigation underway over allegations of sexual misconduct, SF Ballet made the decision to pull Hummingbird from the Classical (Re)Vision program. Executive Director Kelly Tweeddale made the programming decision “out of respect for the ongoing inquiry in London, the dance community at large, patrons of SF Ballet, families of the SF Ballet School, and artists of the Company.”

Queensland Ballet in Australia, where Scarlett is artistic associate, has also suspended their relationship with the choreographer. This action, a conscious effort on the part of SF Ballet, The Royal Ballet, and Queensland Ballet to distance themselves from Scarlett, comes on the heels of another high-profile case of sexual assault in ballet. In New York, court proceedings for ballet dancer Alexandra Waterbury’s lawsuit against New York City Ballet, current NYCB principal dancer Amar Ramasar, former NYCB principal dancers Chase Finlay and Zachary Catazaro, NYCB donor Jared Longhitano, and the School of American Ballet are currently underway.

By pulling Hummingbird from Classical (Re)Vision, it looks like SF Ballet agrees.