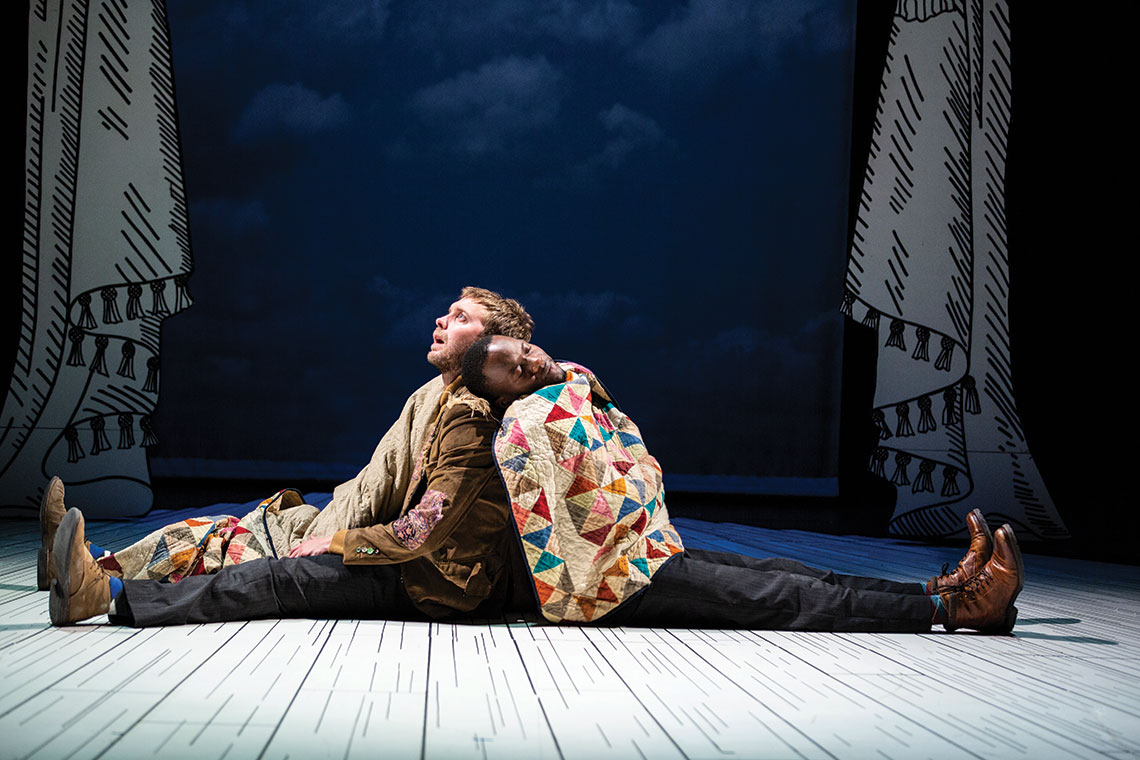 Christian Roe and Ashley Byam in The Velveteen Rabbit at SCT. Photo by Angela Sterling

More than 3.5 million Americans live with autism spectrum disorder. We spoke with five performing arts organizations in the Seattle area who are committed to providing sensory-friendly performances that welcome all families, including those whose children have autism and other sensory sensitive disabilities.

Being an audience member is powerful. Going to the symphony can connect you with a piece of music that feels like it was made for you. Surrounding yourself with opera can feel like communion with the soul. And that perfect piece of theatre will make you forget that you weren’t right on that stage with them. But too often, the performing arts are created for a very specific audience—an audience without sensory sensitive disabilities like autism spectrum disorder. That’s where sensory-friendly performances come in.

According to the Autism Society of Washington, more than 3.5 million Americans live with autism spectrum disorder. Sensory-friendly performances are spaces created with autistic audiences—often children—in mind. Adjustments are made to productions, including sound levels, house lights and any strobe or other lighting elements that might be directed toward audience members. Designations are also often made to the seating arrangement inside the venue. Certain areas of the theatre are designated as quiet areas, while others allow talking amongst friends and family members. Audiences are free to walk around the theatre or even leave the space—all in the service of creating a performing arts experience that addresses each audience member’s needs.

“I think it’s important to be clear that the goal is not to change the art and the performance,” said Tracy Jirikowic, PhD, OTR/L, associate professor in the Division of Occupational Therapy at the University of Washington. Jirikowic has been researching sensory-friendly performances with her colleague Caroline Umeda, PhD, OTR/L, an assistant professor at Dominican University of California. Together, they’ve worked with performing arts organizations to implement sensory-friendly performances in their seasons, with the goal of creating inclusive spaces for audiences with and without disabilities.

“Research thus far indicates that families desire an inclusive experience,” Umeda said, “not a ‘special’ experience that isolates individuals with disabilities or specific diagnoses from the rest of society.”

Umeda, who at the time was a PhD student at UW, led SCT’s first sensory-friendly performance during the run of Goodnight Moon in March 2015.

“For many families who attended it was their first time bringing their child to a play,” Umeda said. “Several parents expressed surprise at how much their child enjoyed and connected with the play and how much they got out of coming.”

SCT has benefitted greatly from Jirikowic and Umeda’s expertise. Not only does the theatre provide sensory-friendly performances for every production in their season, they also provide a Story Book, introducing autistic children to the building itself with topics such as “The Lobby” and “Entering the Theatre.” The section entitled “My Seat” includes this comforting piece of knowledge: “My seat will always be next to my family. I might have my family on one side of me and a person I don’t know on the other side of me.”

“One of the reasons I was drawn to Seattle Children’s Theatre was its commitment to making an inclusive space for all young people in our region,” said Artistic Director Courtney Sale. When she started at SCT in 2016, the theatre offered sensory-friendly performances for three of the season’s six productions. The next year, they were included in all six.

“Attending a sensory-friendly show is one of the most rewarding aspects of my job,” Sale shared. “After the sensory-friendly performance of Stellaluna, a mother approached me and shared that this offering truly allowed her daughter to be herself. They felt welcome to verbalize and process the show in a way that might not be encouraged with a predominately neurotypical audience.”

But even with all the joy that comes from sensory-friendly performances, that space presents its own challenges. Umeda flagged marketing as one of the key challenges. Visibility is growing, but there are still many audience members who aren’t aware sensory-friendly performances are an option for them. Another key challenge is a lack of financial resources at the ­ non-profit level.

“Organizations invested in these inclusion and equity initiatives need financial support to both get these programs off the ground and make them sustainable over time,” Umeda said. “In order to make sensory-friendly programs a reality for non-profit arts organizations, a funding stream is necessary.”

“After one particular performance, a parent told me what a joy it was for them to be able to enjoy theatre as a family in an atmosphere tailored to their needs,” Ware shared. “It’s really a privilege to be able to serve people in this way. Theatre is for everyone—and everyone should have the opportunity to enjoy the art form. Sensory-friendly performances afford people the opportunity to be included in a world that often feels exclusive and out of touch with their needs as a family.”

In addition to many of the sound and lighting adjustments already mentioned, sensory-friendly performances at Taproot begin with a live announcement from the actors.

“They introduce themselves and let it be known they’re all friends putting on a play together,” Lund explained. “So, if they say mean words in the play, they aren’t really mad at each other. They also remind the audience it’s okay to laugh and just have fun.”

General Manager Erica Weir shared that during those first few seasons of sensory-friendly performances, Village Theatre put a lot of stress on themselves to deliver the perfect experience for those audiences.

“What we started to realize through talking to families,” Weir said, “was that the most important and valuable thing was for the kids and their families to feel welcome and accepted, and that no apologies were needed.”

Weir elaborated, explaining that every audience member has different needs. Some need to sit still, taking in every detail, while others need to use electronic devices, fidgets or headphones in order to feel comfortable. Some children need to be able to walk around during the performance and others leave before the performance is over. And every experience is accepted and welcome.

In 2015, Seattle Symphony began exploring ways to make their family programming more inclusive to neuro-diverse children. A board member connected the Symphony with the University of Washington Autism Center and, soon after, the Symphony partnered with Seattle Pacific University’s Music Therapy Program and Music Works Northwest. These partners provided the Seattle Symphony with the resources required to develop sensory-friendly programming as part of their season.

“The best part of the Sensory Friendly Concerts is seeing families and children able to experience a concert in a comfortable space where they do not have to worry if their child is going to make too much noise or be singled out for acting strangely,” said Collaborative Learning Manager Amy Heald. “What I love most is how the children and families feel comfortable to experience the concert however is best for them. It’s always incredibly rewarding to watch how the children get more comfortable and confident throughout the concert experience. Many are dancing and singing by the end. The dream is for all families to feel welcomed and comfortable attending any family program at the Symphony,” Heald said, “no matter what needs their child may have.”

Seattle Theatre Group experienced their first ever sensory-friendly performance earlier this year with the national tour of The Lion King.

“Seattle Theatre Group has been receiving a number of emails and thank you letters from audience members expressing their most sincere gratitude,” said Associate Director of Education Marisol Sánchez Best. “I’ve read a number of letters that have stated that this show was the first show they’ve attended as a family. As a parent, this is hard to hear because everyone should be allowed to enjoy a night out as a family in a judgement free environment.”

Sánchez Best hopes that this will be the first of many sensory-friendly performances at the organization.

“Seattle Theatre Group is the people’s theatre,” Sánchez Best said, “and we are committed to continuing this work for years to come.”

And a commitment to inclusive, welcoming performing arts experiences for audience members with autism spectrum disorder is a commitment we can all get behind.