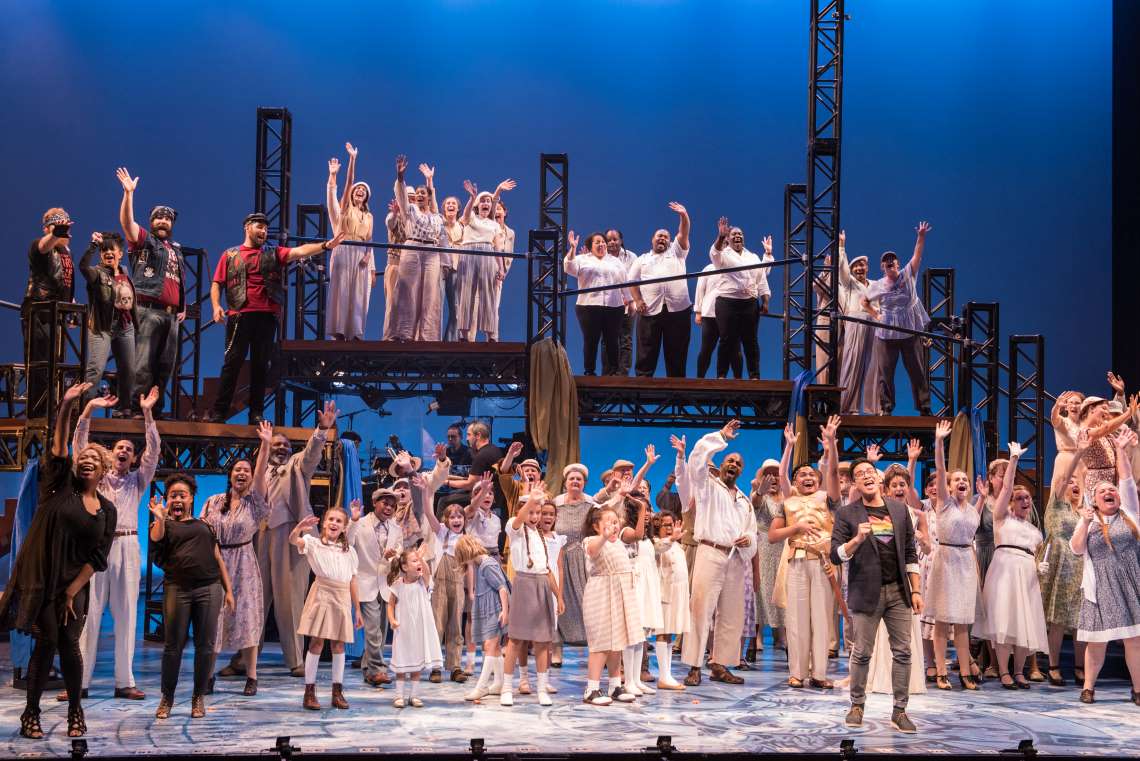 We talk to Public Works Director Angie Kamel about how Seattle Rep’s Public Works program centers on the joy of theatre, and how it lives up to their motto: “theatre of, by, and for the people.”

Seattle Rep’s Public Works program is an ambitious attempt to create theatre relevant to communities and those within them. After successfully launching with a citywide production of The Odyssey in 2017, the program has provided workshops, classes and conversations about theatre. This summer, they’re back to rehearsal as more than 100 community members prepare for a musical version of Shakespeare’s As You Like It at the Bagley Wright Theater in early September.

Rosemary Jones: How did the idea for a series of community classes, dialogues and grand performance come about?

Angie Kamel: Public Works began as a program at New York’s Public Theater for community-based theatre. It’s certainly a lovely way for a regional company to be involved in community. Our Artistic Director Braden Abraham was interested in this type of work for some time. He was so excited about [what New York had done] and wanted to make it happen. He and Marya Sea Kaminski kept talking about the future of Seattle Rep here. Marya was interested in a similar type of work and [began the program at the Rep]. In 2016, we held our first classes.

How does the program work for Seattle Rep and its partners?

We are looking for deep, long-term relationships with members of our community and building relationships with existing organizations. We host classes and special events throughout the year to create an appreciation of theatre-making in general. Our partners vary. We have seven partners at the moment and some have been with us since 2016. Some of our participants, like Path with Art, create arts access for folks who are low or no income. For the acting classes at Seattle Central College, we are embedded in classes. We work with Ballard NW Senior Center, Byrd Barr Place, Jubilee Women’s Center, the Boys & Girls Clubs of King County and, most recently, Compass Housing down in Redmond. At Compass we have a multigenerational group with the youngest participant being six and our oldest in her 70s.

What are some of the ways that you spark conversation around theatre and the community?

We host a meal around every mainstage show, two potlucks a year, and find other ways to support leadership of different organizations. [One] of our goals [is] to build enough relationships so that we can get together in our upcoming season to create cross-cultural communications and intergenerational connection—to have young people from Boys & Girls Club building relationships with Ballard NW Senior Center, for example. We want to emphasize human commonality and build ties across experiences.

How does the performance of As You Like It build those relationships?

It’s deeply rooted in the values and goals of the program. Musical theatre is a great opportunity for joyful expression. This is theatre for anyone who wants to participate and creates a big, dynamic, exciting opportunity for people on the stage and in the audience. They get to exercise various aspects of their creativity. It’s not only members from our workshops and partnerships. Beyond that, we’ve opened auditions to [the] general public in our region who are interested in the values of the work that we are doing. There are five Equity actors in the show, a number of actors who participate in the fringe scene and a number who feel a real connection with spirit.

There’s also a bunch of community groups who will be on stage.

[A] big part of what we are doing is redefining the participation of professional musicians. Regular musicians who work in musical theatre as well as a number of cameo groups or feature artists [are in the show]. We’re working with a number of incredible groups like the Seattle Hand Drummers, Lucha Libre Volcánica and LQ Lion Dance. Local puppeteer Sarah Lovett is loaning one of her rainbow serpents.

So, this is a big show and a lot of work.

It’s fully costumed and with 100 plus people needing costumes, our costume shop was moving full speed ahead this summer. We want everyone in the show to get the same level of respect as any artist who walks through door.

What do the theatre professionals get out of this work?

There are ways that we produce theatre that aren’t particularly friendly or welcoming or comforting. The pros have learned so much during the process of The Odyssey. A lot of folks did not necessarily know what it was going to be [until] once it happened and saw this is how we can do things differently to support the actors, the director and crew in a really beautiful way. That’s so incredibly good and valuable. Our director for As You Like It, Timothy McCuen Piggee, brings joy. His spirit is perfect for this work. He talks about a big part of what makes this show interesting is the bonds between family, chosen and otherwise. How it’s about reconciliation, love and understanding.

Seattle Rep’s Public Works’ As You Like It will play at the Bagley Wright Theater September 6–8.