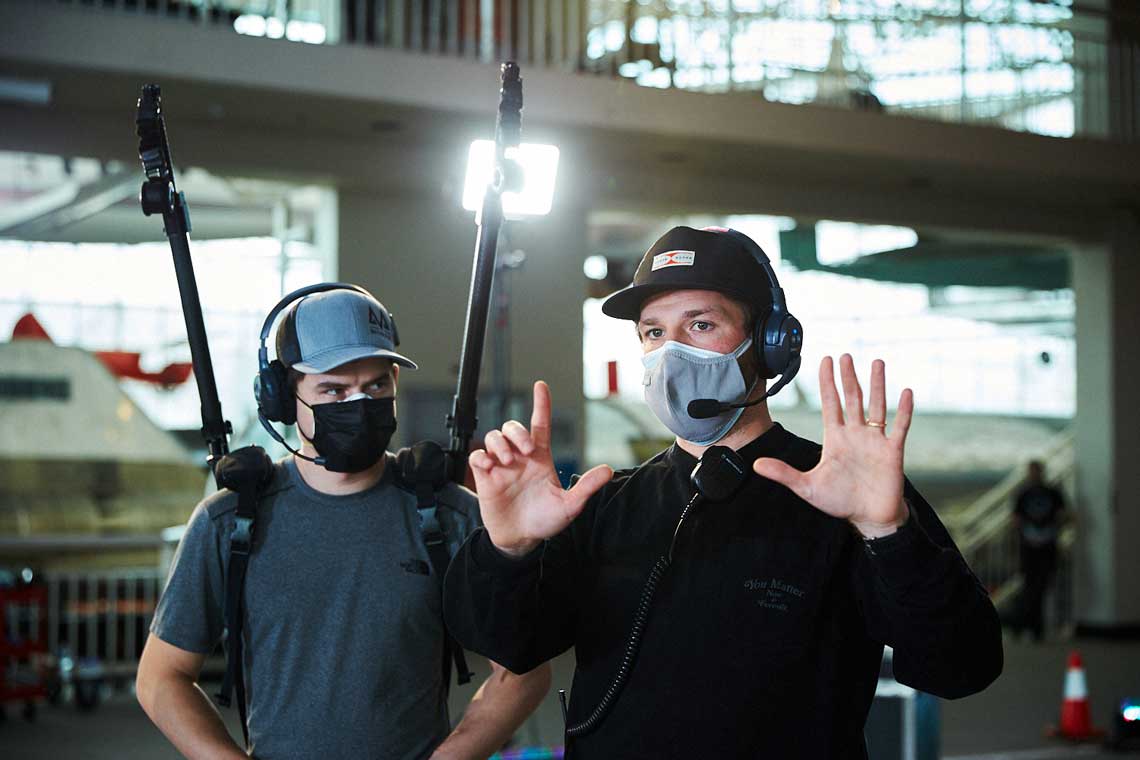 Behind the scenes of filming at the Museum of Flight. Photo by Philip Newton

Director Brian Staufenbiel will make his Seattle Opera debut with one-of-a-kind opera Flight, which will be available for at-home viewing from April 23–25. Based on the true story of Mehran Karimi Nasseri, an Iranian refugee who lived in the Charles de Gaulle Airport for 18 years, Flight blends comedy with a deep and honest exploration of the human condition.

When I spoke with Brian, I was curious to learn about his approach to directing opera. Flight is unique in so many aspects: it’s a modern opera, it’s a comedy, and it was entirely filmed on-location at Seattle’s Museum of Flight.

Lily Williamson: Comedic modern operas seem to be few and far between. What approach did you take to directing this work?

Brian Staufenbiel: This is an unusual opera, in the sense that it’s almost a dark comedy—there’s a lot of exploration of the human condition and how we treat each other, how empathy works. There are many archetypal characters that sort of evolve throughout the piece, and at the same time, there are moments of vaudeville that make you laugh your head off.

I think that the quantity of action and the collision of characters in the context of the piece make it quite active and funny. It’s a beautiful manifestation of emotion and the piece flies by. But yes, you’re correct when you say that there are very few 21st-century comic operas. Comedy is hard, people are jaded, and you’re up against The Office and Seinfeld and what many people find funny, which is a very different medium than opera. But when you nail it, like with Flight, people laugh.

What was your favorite part of crafting this opera?

One of the most amazing things was that Seattle Opera was able to secure the location as the Museum of Flight as our main place to film. They have hundreds of beautiful vintage planes; everyone should go see this place! So we’re in this place that feels exactly like an airport, just like a high-budget film. Being in that location was extraordinary. I love the location, and that’ll make all the difference—you feel like you’re transported into the reality of the film.

I also really enjoyed figuring out how to rehearse this thing not on location. We had to lay out everything and use our imagination with COVID precautions to make this work as a film. I love the challenge of that, and it felt like I was almost dealing with a kind of psychological matrix.

Another thing was getting to know the Seattle Opera. I’ve always been told that this was a special place, so it was so great to be able to have this be my first project with them because it is such an unusual thing.

Originally, we were supposed to do the staged version, but this was a wonderful pivot. I’m very impressed with Seattle Opera’s boldness in slowly building towards doing real films of operas. It’s literally like doing a musical, and the singers and everyone involved had never done this. But we all had an amazing time, and I’ve gotten more valuable and positive feedback from the cast than I ever have before. It was really an interesting and great experience. And with some of the editing done, the film is looking amazing.

I’m so glad to hear that none of the magic was lost from stage to screen. What was it like directing a filmed opera?

I definitely didn’t feel inhibited by the format, and we had a great time. In fact, I’m doing two more opera films between now and the summer, and am consulting on another one. I’m convinced that this could be a new genre of opera born out of this terrible thing called COVID-19 and the circumstances it’s put us in. We’re able to apply real film techniques and work with these amazing singers, who now are world class actors. The talent is unbelievable. On stage, the singers need to sing out into a two thousand-seat hall, which is such a different kind of acting than acting for the screen. In a film, everything needs to come down and be more focused—you need to project smaller because you’re not projecting into a giant hall. But with all of these people, it really seems like they’ve done it before. It was amazing, and we all had a wonderful time doing it.

Filmed opera is a very different type of magic. Live opera is a very different experience for both the audience and the performer because everything can go wrong. When you start a live opera, it goes until it’s done, come Hell or high water. But that’s just not how a film works, because you can stop and just film it again. I think that we’re going to see a lot more digital content that will be building a way for people to see opera all over the world.

I’m so excited to hear that you think that filmed opera will have a more permanent place in the arts world. I love going to the opera, but I know that when I try to bring a friend they’re often intimidated by opera culture—getting dressed up, clapping at the right times, all of that.

Exactly! Yes, there’s this reputation around opera—that it’s snobby or elitist. And everyone who is making opera is trying so hard right now to dispel that myth because it’s really not the case. Opera, especially contemporary opera, speaks to today and today’s circumstances. Now, we’re working on expanding diversity and making it relevant.

And, as you know, there’s nothing more addictive than hearing the voice singing like that. Once you get opera under your skin, you want to hear it all the time! Opera singers are like the vocal athletes of theatre. To do what they do, they need to work so hard—they need years of training and acting, they need to be great musicians. They should be celebrated, so we’re working really hard to get young people or people who are new to opera to realize what a special art form it is. And a lot of that is making sure that we’re telling the right stories, and populating the stage and the team with diversity.

I completely agree with you, opera is such an amazing art form. What’s your message to young people who are interested in experiencing opera for the first time, be it at home watching Flight or in-person when it is safe to do so?

I think that opera is an acquired taste. It’s too easy to go to an opera and say “Oh, that was weird. I’m done.” You need to think about why so many people are interested in this genre—you need to go to different kinds of opera, see some modern, some classic. And then listen to the singers, and make sure that you experience their emotions. And keep trying it a few times.

Opera doesn’t feed you like a computer screen does, you need to work at it. With performing arts you have to put the energy into the performance, but you get back ten times what you put in. After a while, you never want to give it up! Instead of opera being thought of as weird, why can’t it be the cool thing on the block?

I know that Seattle Opera has plenty of youth programs too, so it is so great to see that they’re finding ways to make opera interesting and accessible to younger folks. And Flight seems like a great way for people to get involved in the opera scene for the first time!

Exactly. If someone is introduced to opera young, they have no idea that it’s “not cool.” It becomes normal to them. I’ve done a ton of projects with young people, who are so excited about opera.

And Flight is such a great introductory opera for people, and it will be accessible to young people. There’s a deep exploration in this opera that allows us to explore the human condition, and it’s a very powerful thing. But at the same time, you’re laughing.

Seattle Opera’s Flight can be streamed online from April 23–25. Tickets are available for $35.

Lily Williamson is a second-year student at the University of Washington, where she is the managing editor of the undergraduate history journal. This is her third year as a member of TeenTix’s Teen Editorial Staff, where she writes and edits articles for the TeenTix blog. Lily is passionate about arts accessibility and art that highlights intersectionality, and she hopes to use her position as a teen editor to foster greater youth involvement in the Seattle art world.