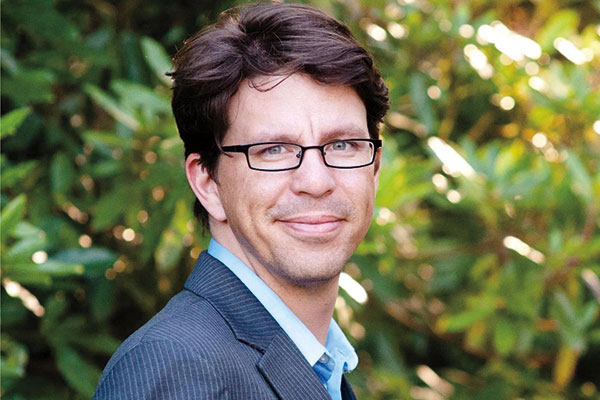 Seattle Modern Orchestra (SMO) is the only large ensemble in the Pacific Northwest solely dedicated to the performance of contemporary classical music. The professional new music ensemble, conducted by Julia Tai, has 18 musicians performing in many different configurations, adding to Seattle’s artistic landscape and cultural dialogue.

Jérémy Jolley, SMO’s co-artistic director (along with Tai), is eager for SMO’s distinct voice to be heard. He recently sat down with Encore to discuss the meaning of modern music, the challenges in performing it and Echoes of Tinder.

Tell me a bit about yourself.

I was born in Lyon, France and grew up in the French Alps. I moved to Seattle in 1997, pursued composition studies and received my Bachelor of Arts and Master of Music degrees in Composition from the University of Washington. I’m the co-artistic director of SMO, also the artistic collaborations manager at the Seattle Symphony.

What is Seattle Modern Orchestra? How is it different than other orchestras in the area?

Seattle Modern Orchestra focuses on music that relates to the present or recent past. It is a modern orchestra that explores what music can be.

How did you get involved with SMO? Why was it important to you?

In June 2010, Julia Tai organized a concert featuring Steve Reich’s Tehillim under the name Seattle Modern Orchestra. In August of that year, after returning from a new music festival in Germany, I was looking forward to creating a way to consistently present contemporary music in Seattle. Julia and I had met during our studies at the University of Washington, where she had conducted one of my works, so I contacted to see if I could join her effort with SMO and we launched SMO’s first season in 2010–2011. Seattle area audiences must have access to all of the different types of music being created today. Experiencing different types of thought and expression is key to living in today’s society.

People have a perception of what classical music is. What does SMO do to change those perceptions?

Today’s performing groups, including SMO, are taking a critical look at whose music has been performed and whose has not. SMO’s mission to perform the music of today gives us the chance to challenge all these preconceived notions associated with “classical” music. We are always experimenting with the concert format and asking our audience for their input. Overall, there is an attitude of welcoming people to a concert as if they were being welcomed into our homes.

Who are some of your favorite modern composers?

Ah! There are too many to list here, but if you insist; some composers that I return to regularly and recommend exploring are Giacinto Scelsi, Luigi Nono and G’rard Grisey. Their unbound love for sound and its expressive potential is very compelling to me.

What are some of your favorite SMO memories?

All of my favorite memories of SMO are a variation on the same experience, that is, at a concert, while listening to the works being played; or after the performance, looking at the facial expressions of the audience. The faces of wonder, excitement, bewilderment. I typically sit on the side of the auditorium, and to see the humble and thankful looks that audiences and performers give one another is magical.

What are you looking forward to in the coming season?

This season is very exciting for me because I’ve only heard one of the pieces of our season performed live! I’m looking forward to discovering them deeply as we prepare them for our three concerts. This coming season we will get to play with Yigit Kolat and his Echoes of Tinder for ensemble and electronics. We will also have a concert celebrating flutist/composer/conductor Robert Aitken. Aitken is from Toronto, Canada and will play with and conduct the ensemble music by Toru Takemitsu, Brian Cherney, Iannis Xenakis and his own. Our last concert of the season will feature the American composer and vocalist Erin Gee who will perform a few of her Mouthpieces with the ensemble. These are works in which she explores the nature of vocal sounds and their relation to instrumental sounds. It is a uniquely beautiful experience.