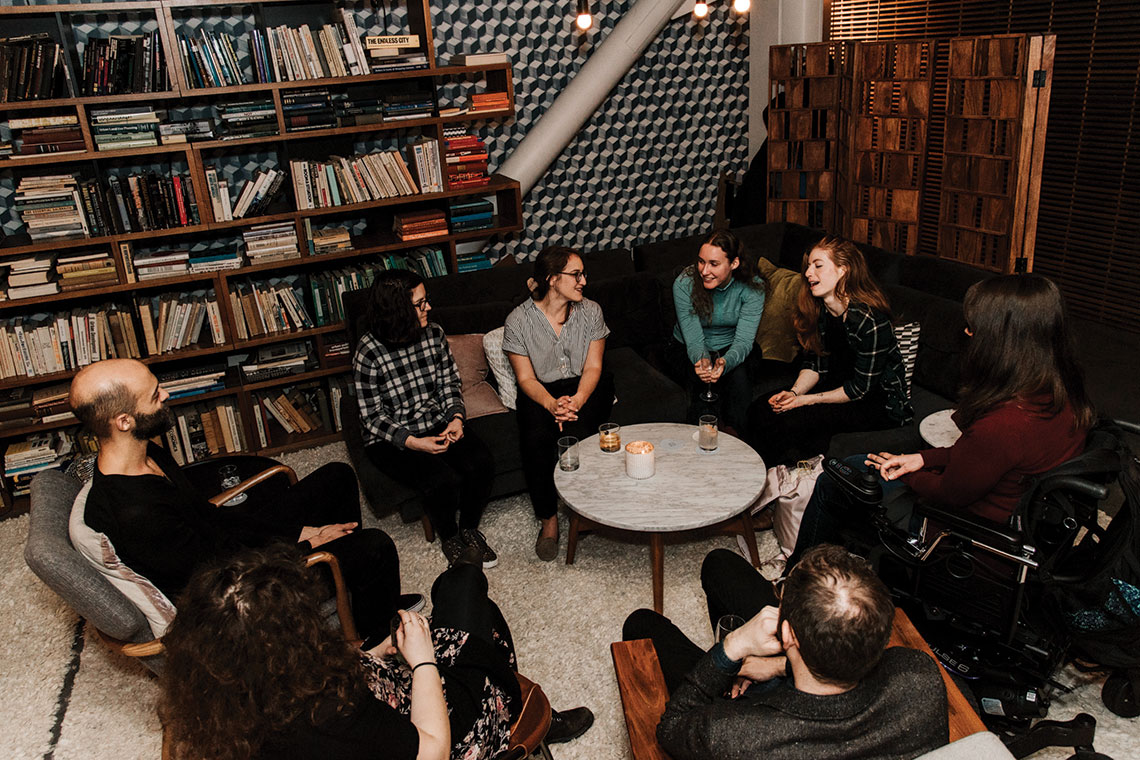 When Sara Keats, Umbrella Project’s director of dramaturgy, told me she was starting a writers’ group, I was immediately interested. I’d been kicking around the idea of writing a play about the fanaticism of college football and the way campuses address rape allegations when players are involved.

Most of my plays come from a place of rage and Rushing was no different. I’d read Missoula by Jon Krakauer and Unsportsmanlike Conduct by Jessica Luther, two books that report on sexual violence at the hands of Division I football players. I spoke with mentors about the topic—including one playwright who’s made his career on the football as hero’s journey story—and everyone was very encouraging. But I’m a playwright—a particularly anxious one. And no matter how much encouragement I receive, it’s not going to change the fact that I ultimately need to write the play alone. And, for this play, that was a terrifying idea. Which is why, when Umbrella Project accepted me into their inaugural Writers Group, I knew that this was the play I wanted to write.

Umbrella Project’s work stems from a philosophy of radical dramaturgy. For Sara Keats, that means a flexible, dynamic and anti-oppressive artistic practice that marries more traditional dramaturgical practices with producing, advocating for and generally being incredibly involved in a new play’s journey from first page to final production.

“The Umbrella Project Writers Group was, in a lot of ways, a natural outgrowth of our mission as an organization,” Keats said. “Umbrella Project is all about serving plays and playwrights, and we think the best way to do that is to inspire and empower new play dramaturgs.”

She added that most good playwrights have a dramaturgical streak within them, one that’s often activated within the confines of a writers’ group. But it’s a different experience altogether to be part of a cohort solely as a dramaturg.

“The biggest difference between Writers Group at Umbrella Project and other script development opportunities is that the dramaturgs are there from the beginning,” Keats said.

In addition to the sheer amount of dramaturgical support, Keats is proud of the flexibility the Writers Group timeline offers. While I used the February to December calendar to write a first draft of Rushing, Seayoung Yim used our monthly meetings to get feedback on Summoning Frankie, a play that was produced at Seattle Public Theater. Now that the show has closed, she’s oscillating between bringing in new drafts and starting a completely new play. Meme García is working on an adapted play but paused midway through to bring in new pages of House of Sueños in advance of their 18th & Union and Bumbershoot performances. And Brandon J. Simmons came into the Writers Group with a play he’d been simmering on for a long time—but ultimately decided to start writing an entirely new play just a few months before our showcase.

Simmons says that the most challenging part of the Writers Group is his struggle to simply write.

“Umbrella Project is all about serving plays and playwrights, and we think the best way to do that is to inspire and empower new play dramaturgs.”

“Having space and time to work on a piece I’ve been struggling with for years allowed me to actually explore the limits of the idea before moving on to something more interesting,” Simmons said. “Goldberg is no longer nagging at the back of my brain. It’s effectively been put to rest, and I have space for new ideas.”

Yim applied to the Writers Group because she’s always admired the artists who make up Umbrella Project. She’s found that the most rewarding part has been meeting other playwrights and digging into their artistic processes.

“I have worked with Erin Bednarz, the director of engagement, on previous productions of my play Do It for Umma and she’s an amazing delight,” Yim said. “I’ve found the Umbrella Project folks are a brilliant and kind group, so I knew I would really enjoy working with them.”

Summoning Frankie, the play she’s spent the most time with in Writers Group, is a nod to the wizarding world of Harry Potter. It’s a comedy about a magical school, but it’s also a play that tackles classism, gender and the politics surrounding school funding.

“Writing about wizardry is something completely foreign to me, but I’ve been surprised how much I enjoyed making magical elements up,” Yim said. “It’s also the first time I’ve written for an all youth cast and it was really challenging and fun to write for that age group.”

García applied to the Writers Group because they wanted to see how other playwrights work and what their process is like.

“I’m a relatively new playwright,” García said. “My play, tnc, isn’t exactly autobiographical, but I’ve been exploring what the concept of love looks like through queer Latinx eyes. Many of the speeches or songs in the play are poems I’ve written about people in my life. So, having them read aloud is oddly cathartic but also terrifying. As a genderqueer Latinx person who is not out to their family, the concept of love tends to simmer inside me until it bursts forth in erratic ways. What would it look like if the poems I write could just be said aloud, spoken for the world to hear, not hidden? What does love look like in a world where Latinx people are being detained, imprisoned and shunned? How do we continue to love in a time so bent on hate?”

The play García has been spending the most time on in Writers Group is an adaptation of William Shakespeare’s Troilus and Cressida, simply titled tnc. It’s set on the border of Texas and Mexico in 2025 and is about a group of Latinx guerrilla soldiers fighting against a white supremacist, patriarchal United States. García came up with the idea earlier this year, when they were yelled at for speaking Spanish on the bus here in Seattle.

“As a Latinx person there are very few instances where I have felt true power on stage or in a rehearsal room,” García said. “Spaces and productions were not designed for my body in this current political climate. My past traumas and fears are never taken into account and I frequently feel like a commodity—on display and dancing for white theater-goers and artists. I cannot express how many times I’ve been asked to use my “native dialect” on stage—or how many times I’ve had to play a prostitute or a maid. These stories, while important, do not reflect the true nature of Latinx communities. We are so much more diverse than that. I wanted to write plays which place Latinx folx at the heart of the story. I wanted to create epic worlds of war, love and loss. And I wanted it now!”

Of course, these four plays wouldn’t be the same without the army of dramaturgs we’ve been fortunate to work with. Andrea Kovich, one of the four Writers Group dramaturgs, considers the collaboration among playwrights and dramaturgs the most rewarding part of the program.

“So far in my career, I’ve done more production dramaturgy, which involves a lot of solitary work,” Kovich said. “It’s not until rehearsals start that a dramaturg really gets to engage with others and have meaningful conversations. Some local theatres and directors recognize the value of having a production dramaturg, but it’s not as common here that a dramaturg has been involved in the development of the script. Having an organization like Umbrella Project that recognizes what dramaturgs can do for new plays is hugely important to the creation of new work in Seattle.”

Mario Gomez has also enjoyed the energy of the cohort.

“Most of my script development work had been one on one with the playwrights, where we’re both focusing on the same project,” Gomez said. “In the Umbrella Project Writers Group, we’re working with four playwrights and four dramaturgs, which makes for a completely different dynamic!”

And while that dynamic is exciting, it also presents its own set of challenges.

“For me, the challenge is that there are eight other people in the room—smart and talented playwrights and dramaturgs—all giving valuable insights and feedback,” Gomez said. “This makes it hard for me to find the balance between the amount and type of contributions I make, while leaving enough space for everyone to contribute and, especially, making sure that the playwrights receive the feedback and support they are looking for in each meeting.”

Dramaturg Rachel M. E. Wolfe has loved seeing her impact show up on the page.

“Seeing my suggestions surface in the next version of a script has been pretty rewarding, I’m not going to lie!” Wolfe said. “There’s a lot of satisfaction and validation in knowing that you’ve helped shape a play into the best version of itself that it can be.”

What Iphigenia Rising most appreciates about the Writers Group is the time she’s been able to spend with playwrights this year.

“Many of the new work opportunities that I’ve been part of before have been a month or two long—super short—so having a whole year to work with four different playwrights and see their journey is really amazing,” Rising said.

From the beginning I knew that Rushing was going to be in good hands in Writers Group, but I couldn’t articulate why. I started this play with so many doubts—maybe I’m not qualified enough to write about football, maybe I’m not smart enough to tell this story, maybe this isn’t a play at all and I’m trying to force something that will never be. I still have some of those doubts. But Writers Group gives me the energy to keep going. These artists care for me—and my characters. They question my choices and remind me of seeds I planted in early scenes. They challenge me to be better. And isn’t that the dream?