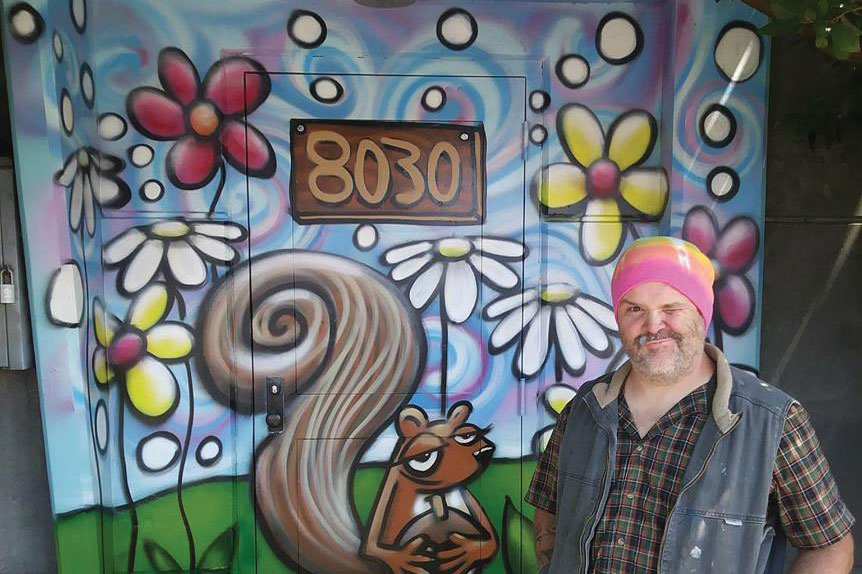 Encore recently sat down with the urban artist, Ryan Henry Ward, to discuss the role of children in today’s society, Amazon hackers and where he’d love to paint a mural next.

Even if you don’t know who Ryan Henry Ward is, you’ve seen his work around town. Maybe it’s that weird Sasquatch painting on a building in Fremont. Maybe it’s an elephant on a Value Village wall. Maybe it’s googly-eyed fish, a walrus, a gnome along Interbay. Marking his work “Henry,” his murals have been popping up all over the city for years.

I grew up in rural Montana and had very little inﬂuence besides Sunday comics, Saturday morning cartoons and children’s books. I really was inﬂuenced by illustrators. Quentin Blake was my favorite. I was in love with how it felt like his drawings took no time at all to make. I always pushed myself to draw cartoons fast because of him. I liked Shel Silverstein and then Jim Unger, Gary Larson and Ralph Steadman as I got older. Presently, I’m being inﬂuenced by Hieronymus Bosch and Alex Kuno. I’ve also had a thread of inﬂuence as an adult from Diego Rivera, Keith Haring and, as cliché as it sounds, Picasso and Dali.

Your murals are often full of odd delight and charmed whimsy. Do you picture yourself that way? If not, how would you categorize yourself?

I ﬁnd myself to be a pretty lighthearted laid-back guy. I tend to have a lot of funny thoughts going through my head most of the time. But I am a full person; I have a deﬁnite shadow side and embrace it. It seems to come out in my private work more. I do have a basic philosophy as a public artist and that is to acknowledge that children are part of the public. I think a lot of public artists overlook their responsibility towards the children whose eyes are wide open and seeing everything. I’m no Mr. Rogers but I admire him, and Jim Henson too, and ﬁnd as an adult that I should take into account the development of the generations that will be responsible for taking care of my soon-to-be geriatric a**.

What do you think is different about a kid appreciating your art over an adult?

It feels like I found an interesting voice that somehow ﬁnds people of all ages to speak to. Five-year-olds, teenagers and adults of all ages enjoying the work in the same show is interesting to watch. I think all ages know when something works; when it has intuitive balance and ﬂow. When you look at something and for an unknown reason want to keep looking. I think that experience happens and transcends the age barrier. I’ve seen it happen with my black-and-white work, my bright color work and my imagery that has nothing to do with fun characters. I think I open the door and allow a big audience in, but I think they see something and can’t easily explain why it works for so many. That’s the fun for me. I get to be the scientist behind the concoctions, so to speak, and watch my experimental process take hold in the hearts and minds of people from all walks of life.

What’s your favorite piece that can be seen in Seattle right now? What murals do you miss that are no longer there?

I always say my favorite piece of art is the one I’m about to paint. But of the stuff that exists, I’m most proud of the work I’ve done for Flatstick Pub and the ongoing relationship I’ve developed with those guys. The installation on the corner of Mercer and Westlake is really worth experiencing. I had been dreaming of full room interactive installations for a while and I was ﬁnally able to do it. I’ve lost a handful of murals, mostly due to the tearing down of old buildings and putting up new ones in their place. It’s hard to see your babies go but it’s also the nature of the game. It’s sad when I lose one because I know how attached the community gets to them and how they become a part of their lives. When someone gets a hold of me and asks for permission to replace or cover it with something new, I feel a responsibility to historic preservation of the work and basically tell them no. Of all of them, I wish my ﬁrst one was still here. That was on the Triangle Lounge in Fremont.

You came close to being able to paint the top of the Space Needle in a competition. What happened there?

Oh, the Space Needle saga. Q13 hired a computer forensics scientist and found an Amazon employee hacked into the voting program and swayed the process. It was weird because I had to remain neutral although I was upset because so many people put so much time and effort into voting for that. In the end they found it was hijacked. I felt horrible for my fans that put the time in and also felt bad for the other artist that was chosen that had to deal with the whole thing on her end. Basically, I don’t enter competitions anymore and have no interest in being involved in games that involve artist’s careers or lives.

If you could paint a mural on anything in Seattle, what would it be?

It would be the Seattle Aquarium. I love that place and that wall is a beauty.