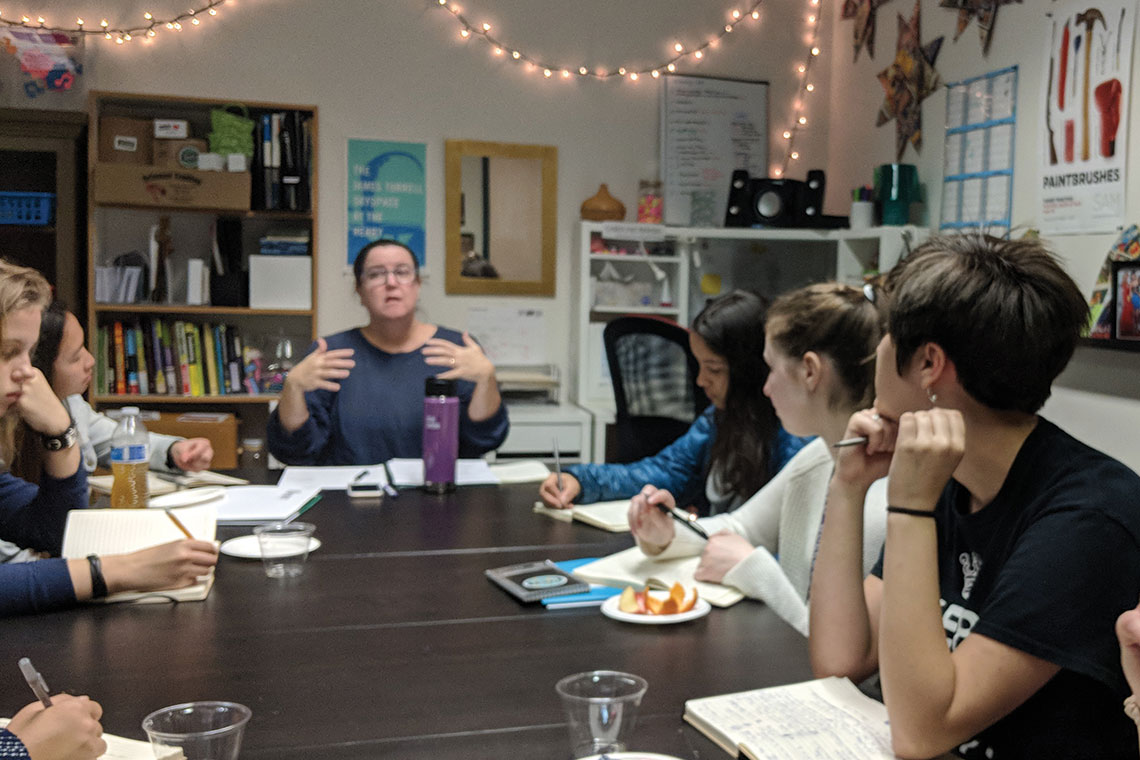 Encore recently sat down with four members of the new TeenTix Press Corps, along with Mariko Nagashima, the Press Corps manager, for a behind the scenes look at what arts journalism means to them.

Since 2006, the TeenTix Press Corps has collaborated with professional critics to mentor teens interested in arts journalism through workshops and intensives. In 2015, TeenTix put the Press Corps on hiatus in order to put racial equity and social justice at the center of the program. They relaunched in Spring 2018 and we couldn’t be more excited.

Danielle Mohlman: What about arts journalism most appeals to you? How did you get started in this field?

Ben Capuano, senior at Mercer Island High School: I got introduced through my school paper. Compared to other articles that we would put out, reviewing had an increased emphasis on writer voice, which I really enjoyed. I got interested in criticism from watching reviews on YouTube—where you really need a personality that shines through all of your work. That was something that inspired me when I started out. And I think just over time it’s been easier to—well, I guess I’m actually still working on finding my voice.

Huma Ali, junior at Lake Washington High School: I definitely agree with what Ben said about how you get to have an opinion, but it’s also not just about your opinion. You actually have to look at the piece of art critically and assess what the artist did, how they did it and the constraints they had. And arts journalism also serves as a record for the artistic events that have happened over time.

Erin Croom, senior at Garfield High School: I feel like writing arts criticism is a more formal expression of my opinion. Because it’s one thing to talk to my friend and say, “Oh I liked this movie.” Or “I didn’t like it.” But to analyze it in a more—not really intellectual or scholarly way—but in writing. In words that make sense on paper instead of how I’m talking right now.

Nagashima: You kind of figure out your opinion about something as you’re writing about it?

Ali: And I think you can also figure out why you think that. Because when you’re talking to your friend, you’re like, “Yeah, I don’t like it.” But when you’re writing about it, you have to really dig deep and think, “Well, why don’t I like it?”

There are joys that come with arts journalism, but there are also challenges. Talk to me about a challenge you’ve faced and how you worked through it.

Joshua Fernandes, junior at Ballard High School: One of the challenges that I faced recently was figuring out how to review something that I’m not really familiar with the medium of. I recently reviewed an improv show—and that was my first improv show. And it was a horror show—and that was also my first horror-themed experience. So, approaching it from a position where you’re knowledgeable, but at the same time vulnerable. It’s really hard to strike a balance between the two and still make yourself sound authoritative.

Right, because we’re expected to be experts for the readers, even if we’re not.

Croom: I guess I had kind of an opposite experience when we saw the film White Rabbit. Film is where I feel the strongest, but with this one . . . it was just kind of odd and I didn’t really like it. And it was disappointing that I didn’t like it because I wanted to like the movie. I was kind of at a loss for what to say about it because I don’t want to tear it to shreds; it doesn’t deserve that. So, I researched. I looked at some other people’s reviews to see what they thought and how that compared to what I thought. And that helped me figure out my own ideas.

Once you sat down to write your review, did you feel the same way about the film as you had initially?

Croom: I think so. It was just easier to articulate.

Capuano: During my first review for TeenTix, it was hard for me to physically juggle my notepad. I’d never really taken a notepad to go review a show before.

And writing in the dark!

Capuano: Yeah! And I didn’t know how much to focus on my notes at the expense of not focusing on the show. So, I went on a note taking hiatus for a lot of the performance and then when I went back to write my review I was like, “Ah, I wish I had taken notes on this.”

Nagashima: Also, there’s been a little bit of a challenge in deciding what kind of style or voice TeenTix reviews want to have and deciding what, editorially, that looks like. Because this is new for everybody. We’ve never done this before.

If you ran your own arts publication, what would it look like? What would you prioritize in terms of journalists and coverage?

Nagashima: Because you helped set it up.

Ali: Oh yeah that makes sense. (Laughs.) I like the process. It’s effective and it’s fun. It’s a very enjoyable process—especially how our editors go see shows with our writers.

Croom: I really like how in the Press Corps Intensive everyone is female-identifying. And it’s just a totally different sense of community than in my classes, where it’s both girls and boys. I think that focus, even though it’s not intentional—it’s just people who applied and got in—but it really does have an effect on how we discuss art and how we are willing to share our impressions and responses.

Ali: And the people who are involved want to be involved. At school, things are made more painful because people don’t want to be there. But when you’re doing Press Corps, everyone wants to be there and they do their part, so it makes it a lot more enjoyable.

Fernandes: I would agree. It’s just a lot of people who are really passionate about art and they love doing what they do. And, ideally, they would never get burned out. And they’d continue to do what they love just because they love it.

This round table was lightly edited and excerpted from an interview conducted November 7, 2018.