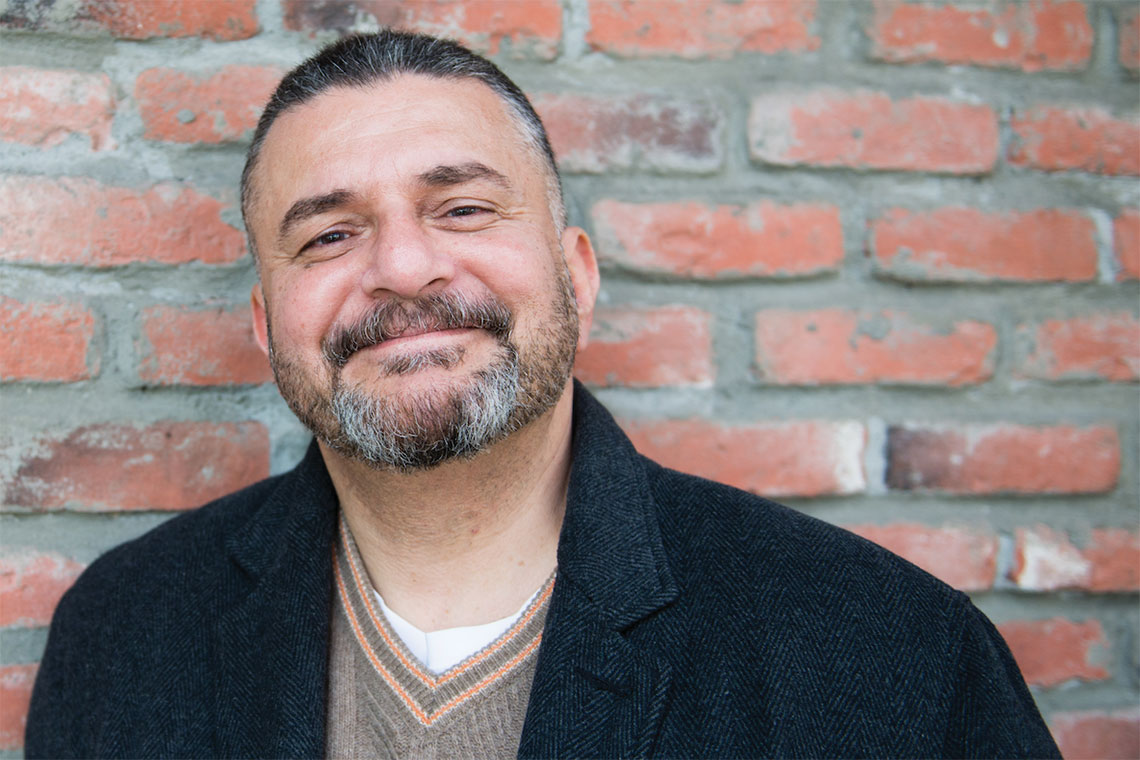 If you’re an avid theatre-goer in Seattle, chances are you’ve seen a Yussef El Guindi play. This prolific playwright has become an artistic staple here in Seattle, a city he has called home since 1994. (Upon reflection, he shared that he’s lived in Seattle longer than he’s lived anywhere else—even England, where he was raised after his family emigrated from Egypt.) We had the opportunity to speak with him about his writing, being a theatre artist in Seattle and ACT’s 2018 Core Company.

Many of your plays examine the immigrant experience through a theatrical lens. Is there something that you wish Seattle residents better understood about immigration in America?

It’s not easy. Immigrating is sort of akin to walking a wobbly, wooden bridge over a precipice in a deep fog—a bridge that appears to be disappearing behind you and whose intact structure up ahead is not assured. And even if you “make it across” and achieve citizenship, world events and political shenanigans might occur that might suddenly imperil your standing as an immigrant.

Different racial and immigrant groups at different times will frequently get slandered in the headlines. I think it’s a phenomenon among immigrant groups, and more broadly, different racial groups within the United States, to hold their collective breaths every time there is some horrendous act of violence that makes the news. We all secretly pray it isn’t someone from our “tribe.” When a white person commits a horrific act of violence, I don’t get the sense among European Americans that they feel they have to carry the burden of that crime. The crime is not foisted on them as a collective group. There is no sense of guilt or worry that this might in some way impact their standing in society.

But for certain immigrant groups and people of color, that worry is real. You feel pressured to publicly disavow any connection or feeling for the individual who perpetrated that crime. If the perpetrator is an Arab or Muslim, the mainstream press won’t speak of that individual as troubled or suffering from mental health issues. Instead, they’re terrorists, monsters, and live outside the pale where everything good and civilized apparently lives.

At such times, you feel you’re back on that bridge over that precipice. And the bridge feels even more wobbly than usual.

How has our country’s current political climate impacted your writing?

The United States has been “Trump-land” for some time: a place where an alarming degree of xenophobia and racism are the norm. I’ve been in “crisis mode” when crafting plays for some time now. And when responding to current political events, I have to tread carefully. Mainly because, with rare exceptions, the turnaround between completing a first draft and a full production can range from two to three years, sometimes longer. Whatever political crisis that triggered the play may be old news by the time your piece is staged. You have to sift through the news event, or zeitgeist of that moment, to find what resonates on a more universal level—and that might transcend the particular political moment that triggered the play. Which means breaking things down into very personal, human matters—locating your protagonists, with all their personal issues, within the social and political web in which they operate and understanding that what makes us human are also the political structures that prop us up as social creatures.

That’s the goal anyway: to turn something very specific, local and political into a more universal exploration of our status as citizens and humans just trying to survive.
As for my home country of Egypt, after the revolution in 2011 I wrote several plays in response. One of them, The Mummy and The Revolution, I wrote too soon—feeling much too hopeful for a future that didn’t come to pass. The other two plays, Threesome and The Tyrant, I took a different tack. I know these plays are still expressive of both past and present circumstances. The shock waves from the revolution and its aftermath continue to ripple through me and will probably impact my writing in some way for some time to come.

You’ve worked with a number of local theatre companies in the production and development of your plays. Do you have a favorite theatre company to collaborate with? Why?

I’m very thankful to all the theatre companies who have extended their hand out to me. Most theatres are very squeamish when it comes to putting on plays by and about Muslim and MENA (Middle Eastern, North African) writers. They’re not quite sure where these stories and people fit in the received narratives of the day. For all the talk of diversity, most theatres lack a truly global vision that encompasses the full array of voices from around the world. Not to mention an inability to see beyond the limited diversity schemata that determines who is and is not heard from.

So, I really appreciate those adventurous local theatres that have reached out to me, like West of Lenin, Theater Schmeater, 18th & Union, and ACT. ACT in particular has shown a keen interest in my work. To have a theatre of this size give me a platform for my plays has been very important in my development as a writer.

You were recently named to ACT’s 2018 Core Company. Could you talk to me about what it means to be part of this company of artists?

I joke with colleagues that as theatre people we are door-to-door salesmen and women—itinerant individuals knocking on numerous doors, trying to get theatres to invite us in. And how humiliating it is, when more often than not, those doors are either shut on us or our knocks are ignored altogether. So, for ACT to invite me in to be part of their 2018 Core Company is huge. As for how that plays out in the future, we’ll see. We’re all sort of making up this position as we go along. As John Langs, the artistic director, likes to put it, I get to be the first pancake. But psychologically, for me, the promise of having a home where I might get to exercise my talents, where my plays may have a good chance of being staged, to have a place where I can try out new material with exceptionally good actors, well, that’s just a lovely position for a playwright to be in.

What excites you most about being an artist in Seattle? How do you hope to grow and challenge the theatre community here?

What’s interesting to me is the degree to which I have been shaped as a playwright by Seattle theatre audiences. There are personal and cultural influences of course that will always infuse the heart of everything I write, and to which I am both grateful for, and to which I am a prisoner of—to the degree that we are all shaped and imprisoned by the particulars of our individual pasts. But as a playwright, having spent now twenty-four years in Seattle seeing many plays at different theatres, I realize I have not only been learning from the plays I watch, but from the reactions by the Seattle audiences to those plays. Without realizing it, my plays are being influenced by those audience reactions. I have some appreciation of what might and might not stir a Seattle audience. There are, of course, no guarantees that what you write will be to their liking. But I think any playwright who spends a long enough time in one city will invariably start unconsciously adjusting their work for the audiences they’ve attended plays with. Sort of like knowing what jokes and stories will fly at a family gathering.

But that is very much countered by my non-Seattle subject matter. And that’s the challenge for me. To write about peoples and conflicts that people here don’t necessarily relate to. To humanize individuals and situations that too often get flattened in the press. People do like to see themselves up on stage in some way. My job is to bridge the gap between the non-Seattle folk I portray and the Seattle audiences who, hopefully, come to see my work. (Thank you to all those who do attend!)

Do you have any plugs? How can folks find more about you and your work?

I do have a play of mine called Hostages, written almost thirty years ago (!), that’s going to be done at 18th & Union in October, directed by David Gassner. I’m curious to see how it stands up after all these years. Come see it if you can.