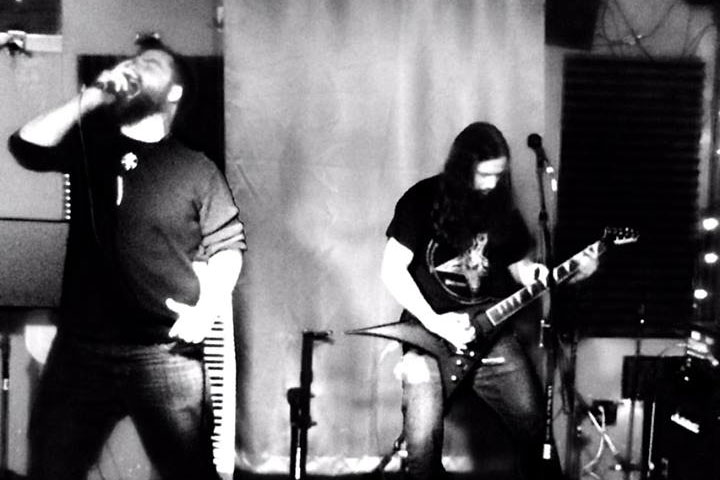 Jeran Michael Brown crossed over to the dark side, from opera to metal. The son of two musicians in Northern California, he showed an early aptitude for singing and received vocal training from a young age. He worked his way up from community theatre shows and collegiate workshops to the Fresno Grand Opera, where he played such roles as the Imperial Commissioner in Madame Butterfly and the Herald in Verdi’s Othello. He hadn’t gotten his vocal studies degree yet and was already performing professionally alongside world-renowned singers.

But the siren song of the dark arts beckoned Brown. He dropped out of the opera scene and moved to Seattle seeking new sounds. A growing fascination with metal took over and he exchanged his arias and oratorios for primal screams and growls. He’s now preparing to release his first metal album as the singer of Whythre (pronounced “Whither-ee”), the culmination of a long transformation. I talked to Brown about his unusual musical journey and the many similarities between the two disciplines.

Tell me how you began to transition from opera to metal.

There’s something very dark, theatrical, brutal and beautifully angry about black metal and death metal. It evoked a darker side of myself. I became attracted to the lyrical concepts, the aesthetic value; an aural assault on the senses that awakened something really exciting in me. I began thinking if I took my training as an opera singer and applied it as a metal vocalist I’d probably be able to go really far with it. It’d be an interesting route to take.

When I started to reveal my love of metal music to my opera peers, they always looked at me like I had something on my face. But there are so many similarities between the grandiose natures of both genres that really meet in the middle. Some of the best operas are tragedies where the heroine dies in the end in the name of love or freedom. Metal music is a lot like that.

My first year in Seattle, I ran into Shon Petrey and we kicked it off by listening to music and talking about our philosophies in life musically, spiritually and humanistically. The creative process took off and we spent the next four years developing this project. Now we have our very first album coming out.

There’s a history of classically trained vocalists who get into metal, right?

There are definitely a lot of classically trained metal musicians and rock musicians. The lead singer of System of a Down [Serj Tankian], modern symphonic metal like Nightwish, Cradle of Filth—a lot of them bring a classical influence into their music.

There’s a high level of virtuosity there. When you think of metal, at first you think of this loud stuff, but if you dig deeper—

The most important thing about opera is it engages your emotions and brings them out for the world to see. Metal does that as well. The concept of horror and darkness and brutality is what makes it so attractive. It reaches in and pulls out this seething arcane feeling that is very peaceful but at the same time is made of chaos. In both genres you might not know what is being sung, you might not even speak the language, but the emotion is being communicated.

A lot of people will say it’s brutal and gory and satanic and evil. Well, yes, it’s an invocation of the brutality within man that is put into the medium of music so we are able to hold this force out in front of us and view it for what it is. It’s a good way to spiritually exorcise the filth.

Speaking of brutality, I listen to that stuff and think: How do you protect your voice? Do you use the techniques you learned in opera?

There’s a book called The Structure of Singing by Richard Miller. To quote him, singing is just air escaping the body. I was able to take that concept to metal vocals. I do engage all of my body and my diaphragmatic muscles especially when I inhale to scream, but I keep my throat open as though I’m yawning. It takes a while for your vocal chords and vocal folds to get used to such turbulence. It’s not actually screaming; it’s just a high, intense sound that comes from air being pushed out of the body.

Which is harder, opera or metal?

I’d say opera wins that one because it’s a lifelong achievement. You’re never done learning about your own voice. But it’s the same for metal vocals. Who knows how I’m going to sound after ten or so years of doing this?

I spent 15 years trying to perfect my vocal technique in opera. Now that I’ve taken it to the metal I’d say that opera is harder because that took 15 years of training. I took those concepts and put them into metal and that just shot it off like a rocket. It’s getting easier and easier to sing the metal stuff.

What would growth look like in terms of metal vocals, having already been through that process in opera?

Basically, challenging ourselves to write more agile music. I’d see myself succeeding in metal vocally if I continue to increase my volume every day. The way I see the entire project working out is to be able to hook that inspiration and meet the dark side of music and love it. We wanna be able to turn heads and make people happy with our music, which is the lifelong goal.