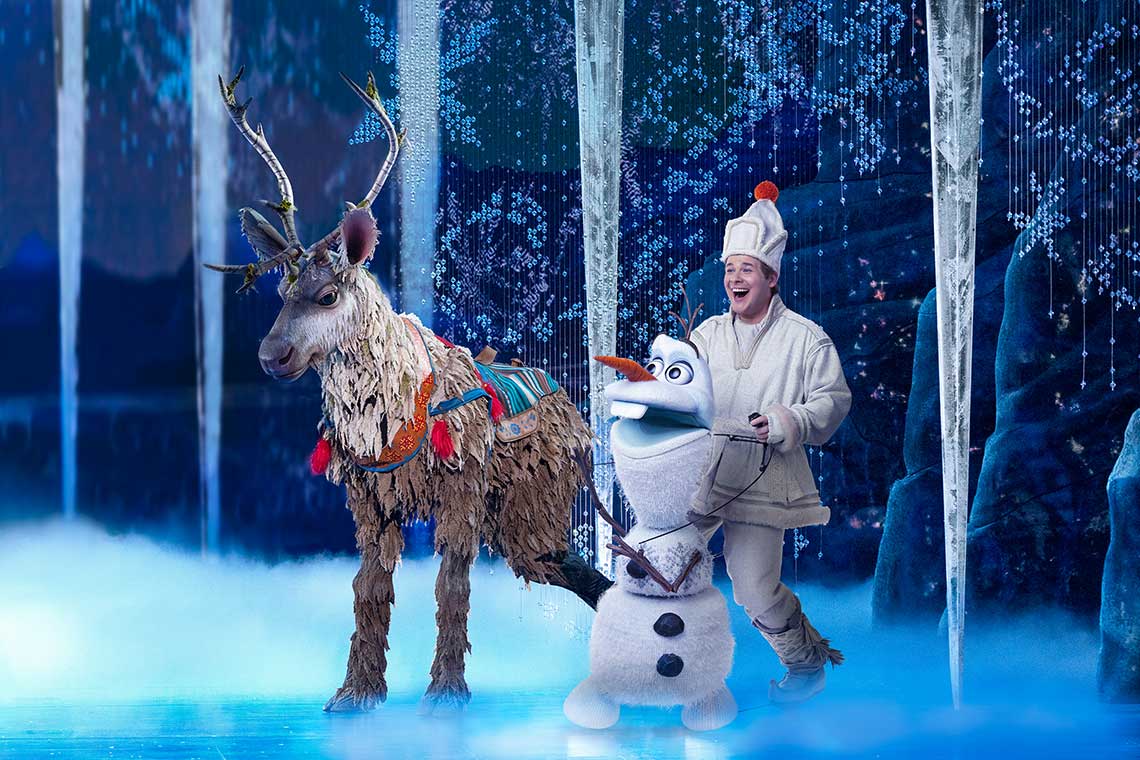 Upon its debut in 2013, Disney’s Frozen almost instantly became part of the zeitgeist of the 2010s. A cultural phenomenon in its own right, it is no wonder that Frozen has transcended the realm of film and, with music and lyrics by Kristen Anderson-Lopez and Robert Lopez and book by Jennifer Lee, has metamorphosed into a Tony-nominated Broadway musical.

I am of the mind, however, that the name Frozen is an oxymoron; the show is filled with warmth. This oxymoron is perhaps most embodied by Olaf, a charming snowman with a distinct affinity for summer. I had the opportunity to interview F. Michael Haynie, who brings the iconic snowman to life in the Broadway touring production at The Paramount Theatre.

Eleanor Cenname: When you portray Olaf, I noticed you use a puppet. Did using the puppet change the way you approached your performance?

F. Michael Haynie: Yes and no. Olaf the “character” has nothing to do with the puppet, so the approach isn’t that much different than normal character work. That being said, the performance of the character is SO much of the incredibly designed Michael Curry puppet. I had amazing teachers, including my puppet guru Lorenzo Pisoni, and amazing cast mates and a creative team that was patient with me while I learned the basics. And special shout out to my physical therapist Taylor Rossi!

Can you describe the audition process for Olaf?

It was great. This creative team was so generous and open to my interpretation of Olaf that it made it challenging and exciting all at the same time. Some of it was with the puppet, but mostly they were looking for an actor. I’m very honored that I was asked to be a part of this production.

What is the most challenging part of being in the production for you?

The physical demand of this show is remarkably unique. So there are some places you hurt that you didn’t know could hurt. Again, shoutout to my incredible physical therapist for helping me maintain my health while also learning to be more in control of my body. Puppeteering is such a new physical language for me and it is challenging and thrilling.

In what ways do you feel you have influenced or brought a unique portrayal of Olaf to stage?

Olaf is, at his core, two things: Jennifer Lee (director and writer of Frozen and Frozen II) and Josh Gad (the voice actor for Olaf). That’s his DNA. The stage production opened and added a new strain of DNA to that: Greg Hildreth (original Broadway cast Olaf). When I got the opportunity to originate this version of the show I’d like to think that I added to that DNA again. So, to paraphrase a line from our show, he’s a little bit of “them” and a little bit of “me.” And since I base him on Caroline Innerbichler and Caroline Bowman (our Anna and Elsa) he is about as unique as they come.

This show has been impactful for a lot of young people, how do you handle the responsibility of portraying such a beloved character?

It’s terrifying. I’m only kind of kidding. Olaf gets entrance applause because he’s an icon. I’m not. But I hope that by the end of the show audiences are happy they met my take on that little scamp.

How do you think the transition from screen to stage has impacted the production?

The bones of the story that the entire Frozen film team created are still there. But there is a tone that can be achieved on stage with real-life people (and real-life puppets) that can reach audiences in a different way. As a huge fan of many animated mediums, I feel that live theatre is a very separate but equally excited storytelling realm. Even if you’ve seen Frozen before, there is nothing like seeing it live on the stage.

Do you have any advice for young people who might want to pursue musical theatre?

Consume as much art as you can. There are so many media platforms nowadays that you can watch anything all the time. See theatre in your hometown. See tours. See movies. Watch TV shows. Read books. Play video games. Listen to music. Watch the news. Study ANYTHING. The arts need rich minds who are ready to contribute to the world right now.

Frozen is now playing at Broadway at The Paramount through March 1. Tickets are available online or at 206.682.1415.

Eleanor Cenname is a 10th grader at The Downtown School. A logophile at heart, Eleanor is also a self-proclaimed theatre nerd who merges her love of language and theatre into a passion for arts criticism and arts writing. Eleanor also enjoys writing science fiction and won MoPop’s 2019 Science Fiction Short Story Competition. In her spare time, Eleanor competes in triathlons, listens to podcasts, and drinks copious amounts of tea.