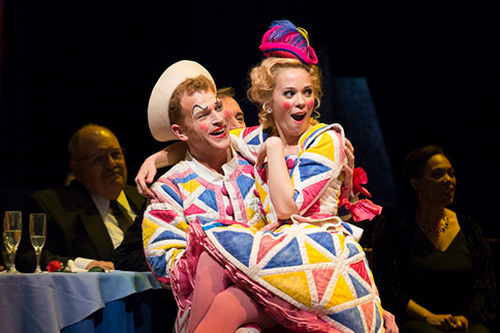 Ariadne auf Naxos, running at Seattle Opera through the end of the week, is a screwball comedy in two parts. There’s lots happening in this show—check out Travis Vogt’s latest installment of “Going to the Opera with Grandma” for more about its inner workings.

Let’s meet some of the cast…

The role of Prima Donna/Ariadne is being played by Berlin-born Christiane Libor. Ms. Libor gave her American operatic debut at Seattle Opera in 2012–13 in the title role of Beethoven’s Fidelio. Here she is singing Wagner:

The role of Zerbinetta is being played by Sarah Coburn. She recently performed the role of Princess Yue-Yang in the world premiere production of Tan Dun’s The First Emperor at the Metropolitan Opera opposite Placido Domingo. Here she is rehearsing for Lucia di Lammermoor:

The role of Tenor/Bacchus is being sung by Issachah Savage. Mr. Savage was the winner of the 2014 Seattle International Wagner Competition earning the main prize, audience favorite prize, orchestra favorite prize, and a special honor by Speight Jenkins. Here he is at another competition singing Wagner:

The role of Harlekin is being played by Andrew Garland, who has had multiple recitals at Carnegie Hall and around the world. Here he is singing a piece from the musical Carousel: