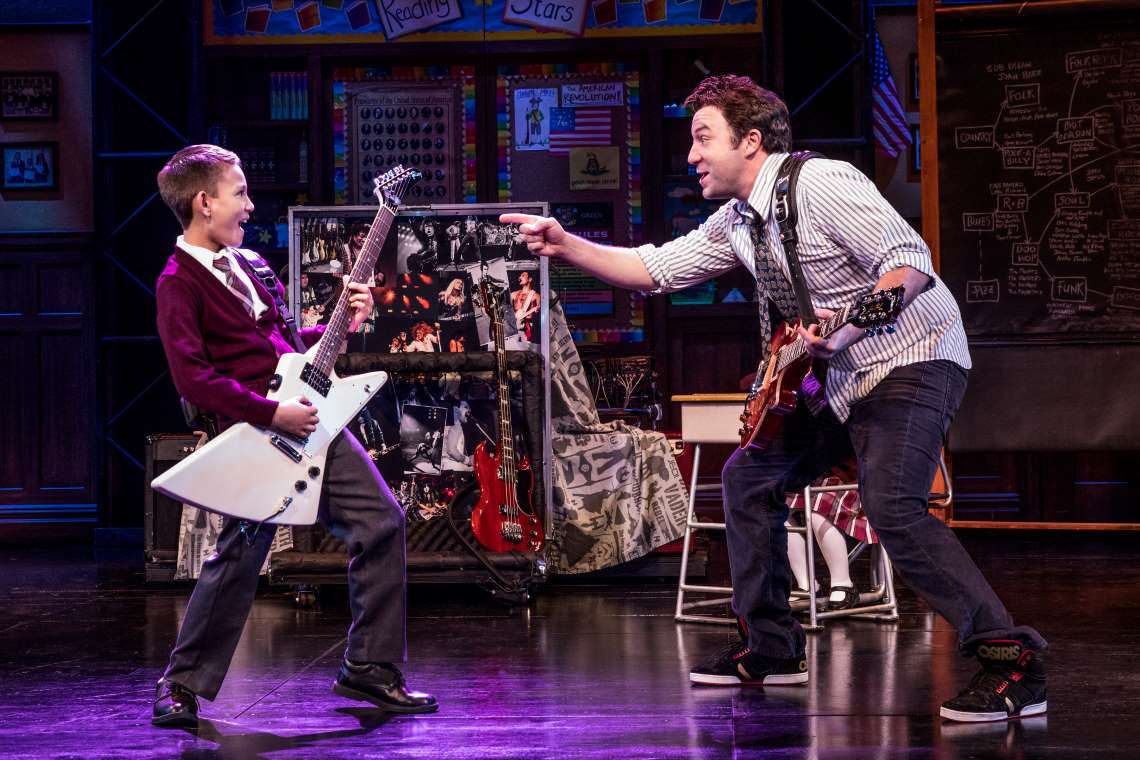 Mystic Inscho and Merritt David Janes in 'School of Rock'. Photo by Evan Zimmerman/Murphy Made Photography

While the musical School of Rock centers on a wannabe rock star posing as a substitute teacher, the showstoppers come from the crowd of child actors playing the students.  A performer since age 4, the now nine-year-old Mystic Inscho plays the role of Zack in the tour of School of Rock.

This triple threat performer loves being able to shred on stage, dance and sing in musical theatre’s first-ever kids rock band that plays live on stage.  But he also enjoys visiting zoos and aquariums across the United States and Canada, as well as being a star. Inscho will be stopping in Seattle in May as part of Broadway at The Paramount’s series.  So, we caught up with Inscho and talked about what he liked best about the show and how he keeps up with real school while on tour.

Rosemary Jones: Why did you want to be in School Of Rock?

Mystic Inscho: School Of Rock is so cool! Also, it is the only musical which requires kids to have serious music instrument skills.  The show has inspired me to practice my instruments. And I have been training in dancing, singing and acting since I was five.  I was so fortunate to get this chance.

Singing, playing an instrument, dancing or acting—what’s the hardest part of your job?

All of these things are performing and I love to perform.  But the hardest thing is to do the show over and over with little time for other things.  I love drums and piano but don’t have much time to play them. We perform eight shows a week over six days and then travel on the seventh day.  We try to be energetic and make every performance the best.

You’re playing a kid going to school but how do you keep up with your lessons in real life?

We are required to have 15 hours of school a week.  I have online courses for fifth grade and there are three tutors with us.  Also just visiting all of these cities is a great learning opportunity.

What’s your favorite moment in in School Of Rock?

That would be when I play my guitar solo and rock out on the stage in “Teacher’s Pet” (one of the last songs). That’s when my dancing and guitar solo come together and the audience responds to me.

If you were a rock star, what position would you want to play in the band?

Definitely the lead guitarist and singer.

Your Instagram account shows a lot of traveling for this show. What’s been your favorite stop so far?

I loved Ottawa and Washington DC.  But every city has had great experiences.  The American and Canadian capitals are especially fun for visitors.  And the people have been so kind to us.

Anything special that you want to do while you’re in Seattle?

Billy Elliot would be a great musical to do. I auditioned for it in a local theatre.  But I was too young to be considered. I would love doing the singing and dancing.

Tickets are available online for School of Rock, playing May 14 to 19 at The Paramount Theatre.