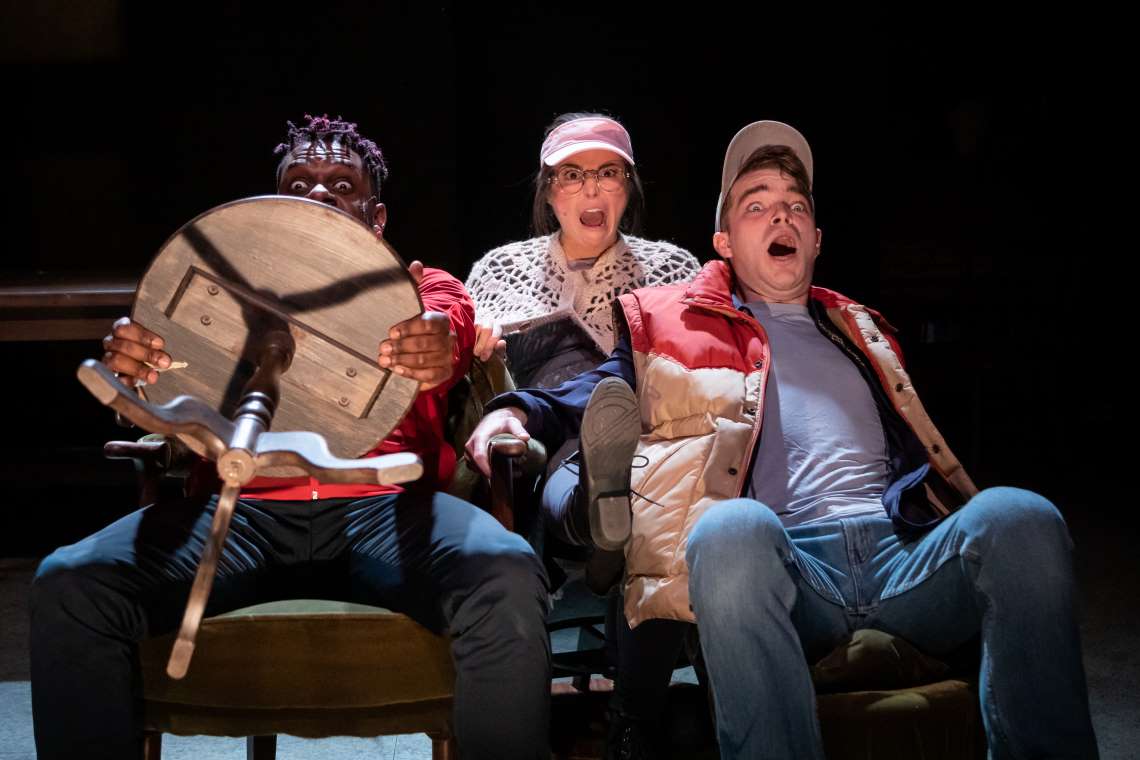 I have always loved travelling to Ingary. Howl’s Moving Castle, the Hayao Miyazaki film set in this magical land has been a favorite since I was four years old, and the book it was based on is pure magic. So when I had the chance to watch a rehearsal of Book-It Repertory Theatre’s production of Howl’s Moving Castle, I had some pretty unattainable standards. Book-It surpassed all of them.

Originally a novel by Diana Wynne Jones, Howl’s Moving Castle tells a tale of transformation and female strength. After being cursed by an evil witch into old age, Sophie leaves home for a life-altering adventure, discovering—and then demanding—what she truly wants. First published in 1986, it was a landmark book. At the time, fantasy writing was a man’s job, and Jones took a huge risk by writing a fantasy centered on one outspoken old woman’s journey.

Adapted by Myra Platt, founding co-artistic director of Book-It, into a musical whose 2017 run stole as many hearts as Howl, this fantasy casts an enchanting spell. It’s gloriously energetic and bewitching for all ages—and very relevant for today.

Back by popular demand, Platt’s version (with music and lyrics by Justin Huertas) celebrates Sophie’s transformation—and everyone else’s! As the characters discover their true selves, Platt says, “[they] all transform and the transformation never really stops. I think hopefully, by the end of the play, you feel that it’s beginning again. It’s constant.”

Book-It has transformed Jones’ words on a page into an exquisite woven tapestry of music and magic and emotion, but this has been an ongoing process. The evolution continues, Platt notes, with “a new concept, new music, [and new] approach,” from 2017 to now. “It’s that kind of a story—it begs to be interpreted again and again. It begs to move and to be explored. I don’t think it can ever be set into one concept.”

Jones’ childhood, against the background of WWII, colors Howl’s world with fear—an aspect that is highlighted in Platt’s current version and is easily relatable in 2019. All of Ingary lives under the evil shadow of the Witch of the Waste. Rachel Guyer-Mafune, who plays Sofie (and was part of the 2017 production), notes that with the current version, “we’re finding this awesome balance of the comedy from this story and the spooky nature and vibe of it. And really what the book is about to everyone—living in fear.”

Elisa Money, the musical director of the show, has more to say about that. “If you think about the last time this show was developed to now, large political things have happened since then. I would say the world as we know it has greatly shifted into living with more fear on a daily basis, especially if you’re a minority or multiple minorities…injecting that fear into the show really helps me see why this story really belongs in 2019.”

The source of that fear, the Witch of the Waste, played by Andi Alhadeff, also contributes to the show’s relevance. Jones chose to make an evil character, indeed the evil character, a woman. Howl, a male wizard, is scared of her. And so is everyone else. The Witch demands respect from all others, something female characters don’t always attain. Alhadeff’s interpretation infuses the role with the perfect amount of power. Her magnetic performance demands attention, and her potent singing fills every nook and cranny of Ingary.

Guyer-Mafune’s Sophie is also fantabulous for a wide array of reasons. She’s a crotchety old woman from time to time, but she also fights expectations, choosing to be energetic, vibrant and assertive. She’s stubborn and tough, and adds even more strong female energy to the show.

Nicholas Japaul Bernard is another superlative actor, giving us a delightfully dramatic Howl. He owns every moment of splendid self-absorption and emotion-filled anguish. He blithely foregoes cleaning and many other generally accepted forms of self-care yet calls for hot showers every other scene. He’s both childish and capable, masculine and feminine.

Watching these adept performers play with gender norms is a joy to behold. Money has thoughts on this, too. “I think that Howl is very flamboyant and so is Michael [played by Randall Scott Carpenter]…and the Witch is very, very masculine, so there are a lot of anti-gender mechanisms for all the characters.”

Book-It’s style is perfect for this modern story. Choosing a musical often resigns a production to a predictable prescription. “The American musical theatre canon is just lacking…a variation in storytelling,” says Bernard. “Before we even get to talking about who is telling what types of stories, the medium itself is kinda in a rut.”

Book-It’s distinct flavor of performance—involving fluid character portrayals, tasteful third person, and simplistic set design—is refreshingly unique in the musical theatre world. This streamlined ensemble style focuses on the story itself. Each actor plays an important role (or two or three) in the creation of the story, cascading through a narrative waterfall of first and third person.

Book-It’s production makes Jones’ book enthrallingly relevant today. It’s a story about change and finding oneself. It’s about strong women but plays with gender norms; it’s about living in fear but bursts with authentic fun. It’s perfect for Book-It and 2019, and for an all-too-short afternoon, I got to travel to Ingary again and experience its magic. If you head to Book-It this December, you can too!

Rosemary Sissel is a senior at Foss High School. She has written reviews with TeenTix and the Tacoma Art Museum, poetry for Tacoma’s Ocean Fest, and policy through the Mayor’s Youth Commission of Tacoma. She loves running around with children, climbing trees and roofing.