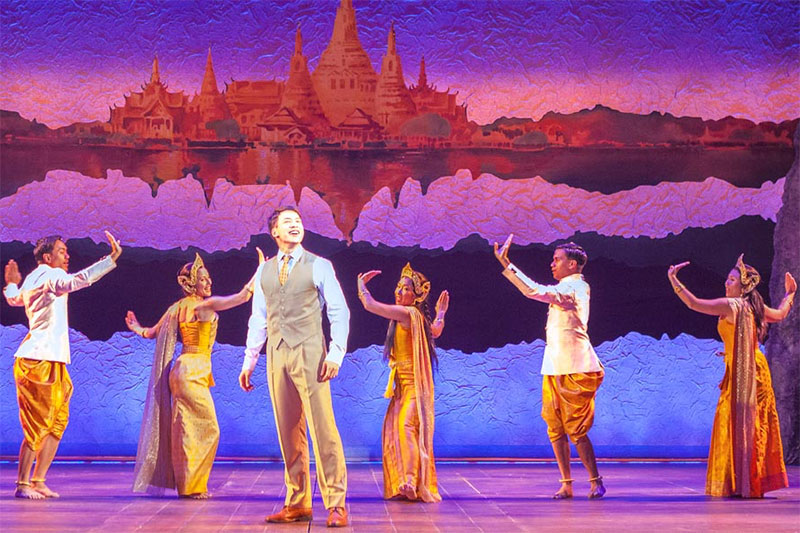 Western theater has long been fascinated with “the Orient.” For hundreds of years, East Asia was like a distant planet to the people who live west of the Caucusus. A planet populated by strange, unknowable, alien-like beings. If you think this is starting to sound insensitive, well, that’s about perfect. Depictions of Eastern culture and people were often painfully uninformed until, oh, let’s say about 20 years ago. But much as we find Mars and Pluto fascinating today—despite and because of how little we know about them—writers and audiences couldn’t get enough of stories set in the “exotic” lands of the East.

Waterfall, showing at the Fifth Avenue Theater through October 25, is a show that would scarcely have been imaginable 50 years ago. It’s an old-fashioned romantic musical for American audiences largely framed from an Eastern perspective. The story is narrated by a young Siamese/Thai (same thing, of course, but it shifts with the time periods depicted) man in the 1930’s who is fascinated by America, but ultimately a proud representative of his own national heritage. There is one representative of white America in the show, and cross-cultural misunderstandings certainly abound, but Waterfall is a story about Thai history and Thai people.

It’s taken a long time to get to the point where an Asian story can unapologetically stand on its own in front of a Western theatre audience. The evolution has been slow going and it has produced many cringe-worthy moments, but looking back can give you a good idea of how far we’ve come.

Gilbert and Sullivan’s Savoy smash hit was originally conceived as a way to covertly satirize British politics of the time. In telling the story of a wandering prince, his awkward romantic entanglements and an arranged beheading, however, the English masters managed to deliver a master class in cultural tone-deafness, which, in all fairness, probably seemed like vivid realism to London audiences at the time. Even while trying to atone for some of Mikado’s excesses in 1908, W.S. Gilbert still comes across as quite condescending toward an entire culture: “It has recently been discovered that Japan is a great and glorious country…the Japanese, however, attained their present condition of civilization very gradually, and at the date of my story they had peculiar tastes, ideas and fashions…many of which they discarded when they found they did not coincide with the ideas of the more enlightened countries of Europe.” Ahhh…the kooky attitudes of the past.

But wait! The Seattle Gilbert and Sullivan Society stirred up controversy just last year by staging an all-white “yellowface” revival of the classic, controversial musical. I didn’t see the show so I have to reserve judgment, but many people in the Asian community (and other communities, no doubt) were aghast. So, of course, it’s always worth pointing out that just because things are better now, doesn’t mean they’re great.

No article about shifting cultural perspectives in Western theatre would be complete without Rodgers and Hammerstein. But here’s a little twist! This show was shocking and offensive to some audiences at the time because of its positive portrayals of interracial marriage and racial tolerance. A lot of the outrage had to do with the song “You’ve Got to Be Carefully Taught,” which seems like a fairly safe, downright banal anti-racist ditty today, featuring lyrics like this:

I mean, can you imagine? Of course, repressed authority figures at the time absolutely could not imagine. They thought the message was downright communistic. An actual politician, on record, said “a song justifying interracial marriage [was] implicitly a threat to the American way of life.” Oh, and just for good measure, when the national show came to Georgia in 1950, actual lawmaker Rep. David C. Jones wrote, “We in the South are a proud and progressive people. Half-breeds cannot be proud.” It’s always jarring to remember that it was not all that long ago that not being racist was considered politically incorrect in many parts of America.

You can tie together a lot of history with the saga of Puccini’s Madame Butterflyand its modern adaptations. As far as operas are concerned, Butterfly was a much more gentle in its racial caricaturing than Puccini’s China-set Turandot. Cio-Cio-san, the Japanese child bride who pines for her disinterested American naval officer husband for years, is a sympathetic and tragic figure. The saga of their doomed relationship can be read as a condemnation OR a celebration Western attitudes of cultural superiority. Or neither, really.

M. Butterfly Playwright David Henry Hwang preferred to read it as a master class in exposing Western feminization of the East. His story is also about the doomed marriage between a travelling Western man (a French diplomat, in this case) and an Eastern woman (Chinese). Only in this case, the woman is a spy. Oh, and the woman is also a man, who successfully convinces “her” husband that “she” is female for 20 years. Sounds kind of ridiculous, but it’s actually based on a true story. Hwang makes this epic deception seem plausible by rooting the diplomat’s delusions in popular stereotypes of Asian women, and then Asians in general. They are submissive, mysterious, unknowable and weak. As the spy (Song) puts it, in one of his/her monologues:

“The West thinks of itself as masculine—big guns, big industry, big money—so the East is feminine—weak, delicate, poor… but good at art, and full of inscrutable wisdom—the feminine mystique. Her mouth says no, but her eyes say yes. The West believes the East, deep down, wants to be dominated—because a woman can’t think for herself. …You expect Oriental countries to submit to your guns, and you expect Oriental women to be submissive to your men.”

This is a righteously angry play, intent on turning the tables. In Madame Butterfly, the American sailor arrives just in time to see his lovesick Japanese wife committing seppuku. But in M. Butterfly, when Song reveals his true identity to his “husband,” he then coldly smokes a cigarette and watches while the Western diplomat does himself in.

Miss Saigon is a far more conventional adaptation of Puccini’s opera. Basically, it’s Madame Butterfly set during the Vietnam War. Butterfly is now Kim, a 17 year-old Vietnamese prostitute, and the Western man is an American soldier. It doesn’t work out. The show was a smash hit in London, but blew up into a massive controversy when the show moved across the pond to Broadway. Famed (and great) British actor Jonathan Price was all set to reprise his lauded performance as a pimp called The Engineer.

Problem was, the character was half-Vietnamese; Price was not. There were calls to recast the role with at least a partially Asian actor. The Actors Equity Association refused to allow the Price casting to stand. There were cries of racism against Asians. Then, of course, came the retaliatory cries of racism against Caucasians (boo-hoo). The show was cancelled. Then it was brought back. In the end, Pryce ended up playing the role and the show made a fortune, but the whole thing became a persistent open wound for the New York theatre community and (hopefully) a cautionary tale for theatre and the arts in general.

It proved, once again, that the theatre of West-meets-East has a way of bringing about unwanted discussions. That’s definitely a good thing.

Waterfall The Musical runs at the 5th Avenue Theater through October 25th.