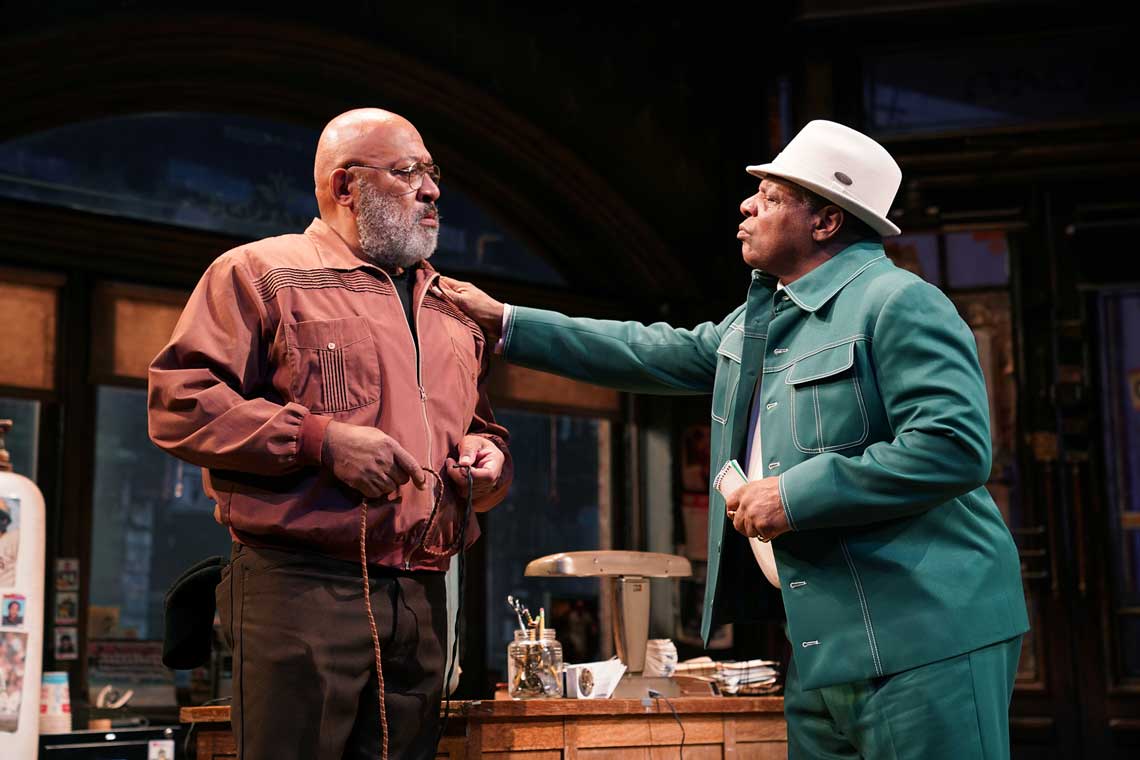 When actor Keith Randolph Smith got on the phone to talk to me about his upcoming performance in Jitney at Seattle Rep, the first thing he wanted to talk about was how much he loves Seattle.

“I’m really excited to get there,” Smith said. “It’s one of my favorite cities in this country.”

The day we spoke also happened to be the day before Smith left New York for the Jitney tour. He was gracious enough to take time out of an errand-filled afternoon to talk about his love of August Wilson, making history on Broadway, and what it means to perform Jitney at Seattle Rep twice—nearly 20 years apart.

Danielle Mohlman: August Wilson is the first playwright whose work I truly fell in love with. I remember reading Gem of the Ocean in college and that was it for me.

Keith Randolph Smith: I love that play too.

Oh my god. It’s so good! Do you have a favorite August Wilson play?

Oh man, it’s so hard. Like you, I loved Gem of the Ocean. It’s such a spiritual journey—and a beautiful journey of self-realization and discovery. But I also love Jitney, which I’m working on now. I usually say whichever one I’m working on at the moment is my favorite. But they all have a special place in my heart.

Jitney deals with community. It deals with a time where I was actually alive—in 1977—versus, say, Gem of the Ocean which is set in 1904. But I was actually alive and conscious in 1977. And so, I relate to the time period. Seventies music, 70s fashion, what was going on in the world. It reminds me of people I’ve met in my journey of life along the way, whether they’re relatives or not. I’ve had so many people come up to me after Jitney and go “You remind me of my uncle!” And the people who tell me this are not African American. They relate to the characters and how they’re dealing with the situations they’re in. It’s really a beautiful experience.

Man, I can’t wait for you to see it! You sit there and go, “How can he make all of these different people out of nowhere?” And we remember them and we care about them and we get mad at them. It’s like you actually get to know them by the end of the play. What a masterful job he did.

I didn’t even realize—until this week—that until the Manhattan Theatre Club production in 2017, Jitney had never been on Broadway. Did it feel like a historic moment when you were working on it?

Philosophically speaking, when history is being made, it definitely feels historic. But you also have a feeling about whether what you’re doing fulfills some sort of creative urge in you. We knew that it was the last of his 10 plays to be on Broadway, so we were very aware of that. But it wasn’t something that we discussed all the time. We just went about our work like artists practicing our craft.

Yeah. Focusing on the present moment instead of what it means.

What were some verbs that were fueling that experience for you?

Oh, to be honest, to be open, to be authentic, to find the truth, to be present, to listen, to go after what it is your character needs as though it was life and death. What makes something imminently watchable is when we see a character going after what she wants in a very determined way. She needs something, and so we can get on board with that. And where we get bored is when a character doesn’t need anything.

Yeah, that drive—that urgency—is so important. Because it dictates why we’re here watching this story being told.

True. It engages you. It pulls you in. It welcomes you. And it can make you upset and angry and frustrated. You go through some emotions, but you’re engaged.

I feel like when I get angry in a theatre, at a character, that’s a success of the production, of the playwright, of the actor. You know, that I’m so emotionally invested that I feel anger for someone that isn’t real.

Yes, ma’am. Yes, ma’am. How many times have I seen shows where it’s just “I don’t like you! Why are you like that? Leave her alone!” And I have to say “Keith, you know that’s a fictional character in a make-believe situation.” They pulled me into their lives and their stories and I care about them.

I’d love to talk to you about your character Doub. How did you prepare for this role? What draws you to him?

At the very beginning, I listened to a lot of music: Curtis Mayfield, Al Green, Marvin Gaye. This is music I grew up on; I graduated high school in 1974. I grew up on funk and Sly and the Family Stone and Chicago and The Doobie Brothers, and War and Power. And I also did three years in the Army. My character is a Korean War vet. I wasn’t old enough to be in the Korean War and I wasn’t old enough to be in the Vietnam War. But there’s that aspect of the military that affects a person and how they see the world.

I came to Seattle Rep to do Jitney in 2002. I was playing Booster, who is the son that gets out of prison. And almost 20 years later, I’m playing a different role.

What is that like to revisit the same play in a completely different character’s body?

The biggest difference that I noticed was when I was Booster, the jitney station was a place I hadn’t been to. You know the first time you go to a new school—if your family moves. That first time you walk in the building, it’s kind of like “Okay, this layout is different. They don’t have enough light in the hallways.” Or when you go to somebody’s church and you notice they’re all a little different. You feel a little outside. It’s welcoming, but you’re still a little outside. But as Doub, who works at the jitney station, I feel very at home in that space.

What does Seattle mean to you? What are you most looking forward to about this experience?

The fresh air! The air is so clean in Seattle. The fish market! The Sound! Going to the movies downtown! We’re coming in March, so football season will be over, but I would love to see the Seahawks play a game. I always try to see sports whenever I go to a new city. I have friends I’m looking forward to seeing—Cheryl West, Tim Bond, Valerie Curtis Newton. I’ve always said if I retire, I could move to Seattle. I’ve always loved that city.

August Wilson’s Jitney runs at Seattle Rep from February 28 through March 29 at the Bagley Wright Theater. Tickets are available online or at 206.443.2222.