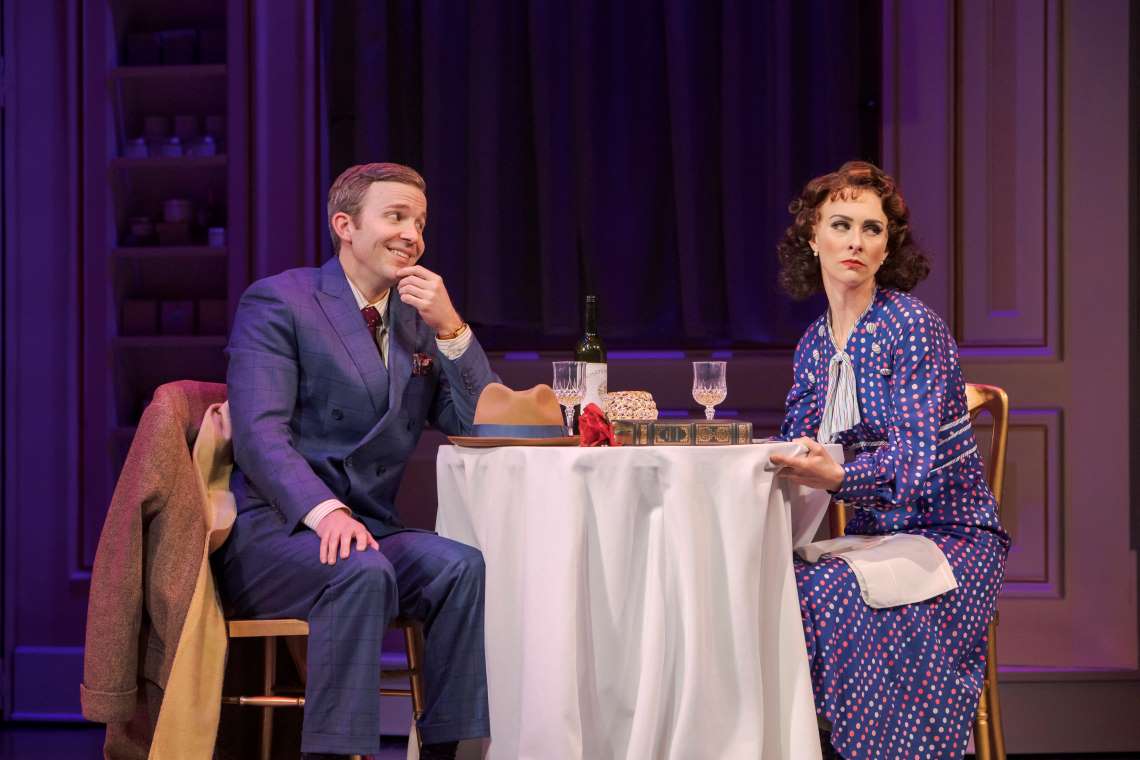 Eric Ankrim and Allison Standley in 'She Loves Me' at Village Theatre. Photo by Tracy Martin

To say that Karen Lund is easy to talk to would be a gross understatement. Lund, who has served as associate artistic director of Taproot Theatre Company since 1993, is making her Village Theatre directorial debut this month with She Loves Me, and the joy she’s bringing to the pre-production process is contagious.

Within minutes, we’d talked about everything from the 1940 movie The Shop Around the Corner—which serves as the musical’s source material—to our shared love of Laura Benanti, who played Amalia when the musical was last on Broadway. “I love her so much,” Lund said, matching my energy for the 2016 Broadway cast album. “Have you seen her on [The Late Show with Stephen] Colbert?”

It’s clear that She Loves Me is a deeply personal story for Lund, one that’s been part of her life for over 20 years—from her first viewing of The Shop Around the Corner to You’ve Got Mail and beyond. And after directing three to four shows a year at Taproot Theatre for the last several seasons, Lund is ready to work away from her artistic home base.

“The thing is, I’ve been raising kids,” Lund said. “And I just haven’t wanted to be away from home that much—especially when they were younger. I’ve really had a lot of artistic fulfillment at Taproot, so I haven’t necessarily gone searching. But now’s the time.”

Danielle Mohlman: Why this musical now? What makes it right for 2020 audiences?

Karen Lund: I found myself sitting across from [Village Theatre artistic director] Jerry Dixon, talking about how they chose this season. And what he was really looking for was a season that would bring joy to his audience. He had a list of plays and he would rate them based on how joyful they were—and She Loves Me kept rising to the top. And I have to applaud him. Right now, I think we all need an antidote to some of the toxic stuff that we’re hearing in the news. These characters are very earnest and very simple. No one is trying to be the next best great this or that. Their idea of happiness is a great love. And a steady income and a family. It’s really simple for them.

And, of course, this takes place in a really turbulent time. It’s 1930s Europe where the Depression was as rough there as it was here. And to have a job and a steady income was difficult—so you valued it so much more. I think in a lot of ways the play asks us to value the simple things, like your connections with your family and your connections with your friends, and know that those have worth. And it’s so sweet and so simple. And yet it’s so difficult for us to do that right now.

And we see these characters in this sweet pocket, even though it might not feel like that on the inside, because World War II is going to be worse. And they just don’t know what will happen.

Right. But what we do know is they’re going to have each other. And it’s not just about the romantic relationships. It’s about this family of perfumery workers who go through a difficult time and actually become closer. The support they give each other to be better people is just wonderful.

It’s way closer than coworkers. There are real, deep friendships there.

Is there a particular moment or song you’re excited to explore in rehearsals?

I’m really interested in the relationship between Georg and Amalia. They are really intellectual equals, which doesn’t typically happen in stories from that era. They read the same books, they have the same philosophy of life. They have razor-sharp wit. There’s a lot of sparring that happens between them and I’m really excited about creating those moments. I think their battles are going to be outstanding; they’re going to be super fun to watch.

Oh wow. You know what it is? I’m always very mindful of the audience. I have to be, because of my work as an arts administrator. But I also feel like it’s my pleasure to be. At Taproot, we’re in an ongoing conversation with our audience—about the world around us, about truth, about beauty, and about how one person can make an impact on the world. When I was offered the opportunity to direct She Loves Me, one of the first things I said was, “Tell me about your audience. Tell me what they’re looking for.”

And I want to be clear: I’m not talking about pandering to an audience. I’m talking about knowing them and meeting them where they are, so I know how best to challenge them. I have this theory that if you can make somebody laugh, you can actually tell them some pretty hard truths. So, I need to get you comfortable. You feel like you’re in your home, you’re laughing, your heart is open. And then I can tell you a hard truth that might change the way you think or the way you behave.

One thing that I love about Taproot is that there’s consciously a dramaturg attached to each play, which feels like a rarity, especially in Seattle. Can you talk a little about the value of dramaturgy in Taproot’s artistry?

I just find dramaturgy to be so important to the work that we’re doing. I don’t care what the play is: dramaturgy can add so much to the depth and breadth of the actors’ work on stage. Any little thing that you learn can spark your creativity in ways that you couldn’t ever imagine. And it’s not just for the actors. Dramaturgy can inform props, the set, costume design. It helps me as a director. I always think, if I wasn’t a director, I might be a dramaturg. Because I love it so much.

She Loves Me runs January 16 to February 23 at the Francis J. Gaudette Theatre in Issaquah and from February 28 to March 22 at the Everett Performing Arts Center in Everett. Tickets are available online or by calling 425.257.8600.