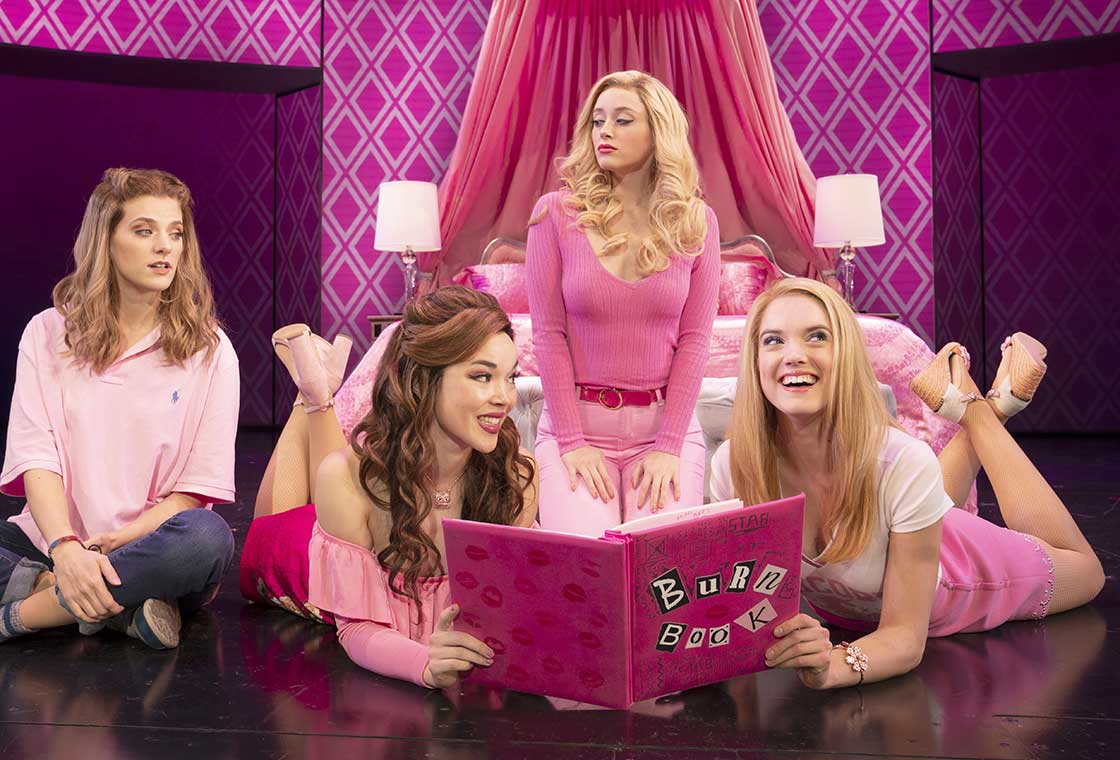 Mean Girls is making its way to The Paramount Theatre in Seattle next week, November 16–21, and we have all the best gossip about the musical known for its gossipers.

Teen writer Aamina Mughal sat down with Mean Girls Broadway star Jonalyn Saxer, who plays Karen Smith, and talked about how it felt being back on stage and what has changed about Mean Girls since Tina Fey’s iconic 2004 movie was released. She highlighted the heart and love in the show and said that stories like this one evolve and change, but the core of it, the lessons it has to teach, are timeless.

“We’re coming back into this with so much joy and gratitude,” said Saxer. “So the joy you’re seeing on stage is not just our characters’ joy.” Jonalyn Saxer is the longest-running cast member on the Mean Girls stage which opened on Broadway in 2018. The show will be in Seattle from November 16–21, 2021 at The Paramount Theatre.

Aamina Mughal: You’ve been with the show the longest so what has that experience been like, seeing it on different stages?

Jonalyn Saxer: It’s really crazy because so much has changed throughout the years and the versions and the companies. It’s so funny, Megan [Masako Haley]—my Gretchen–calls me the resident Mean Girls historian because we tried so many things. That’s why I think the show is so successful, there’s not a joke or a method or a plot point that we didn’t try. We tried everything. You know what I mean? We just tried everything to get to the version that we have now, and that includes doing the version that was on Broadway and then making versions on tour.

Actually, quite a few of the changes for tour were things that were in D.C. that then got brought back in, which is really cool. If you know the music at all [from] the cast recording, our opening number is quite a bit different and that’s because it’s a combination of “It Roars” and our old opening number “Wildlife,” which is really exciting. Some parts of it have been updated even since the pandemic because, you know, time has passed and some of the jokes aren’t good anymore, funny anymore. We adjusted those kinds of things.

Did you watch Mean Girls before you were in the show? Did you enjoy it?

Yes, absolutely, I grew up watching Mean Girls. I loved the movie, always thought it was hilarious. And I remember when the posting came out, five or six years ago now, that it was being made into a musical, I was like, I have to be in that. I have to be in it. It’s funny because …I don’t think [people in my generation] consciously realize how much [we] quote the movie…it’s just part of the vernacular of everyday life in the world now, which is really a blast.

So how does it feel to remake, or put a new spin on something that’s so iconic that it’s just part of our vernacular?

Yeah, yeah, well I think one of the best parts about the musical is there’s so much new stuff. Comedy, you have to be surprised, it always comes from an unexpected place where you’re like “oh!” You know, fear and comedy actually [both need to be] surprising. So the lines that get the biggest laughs in our show are not the ones from the movie. Because people already know those, they know the punchline already. And sometimes “She doesn’t even go here!” will get a little whoop-whoop but all the funniest lines and the ones that really surprise the show are the ones that’re new. And so it’s really exciting…for Tina [Fey] and for us to find the new parts of it.

And also to make our characters—you know this is not the early 2000s anymore, and to update all of those things. What I like about our creative team is they really allow us to do our own versions of the character. Not even just from the movie but from other people who’ve played them. I think it’s so successful because we really bring our own heart and our own souls into our characters and that helps us tell our story in new and more impactful ways.

How do you think Mean Girls has evolved for a new generation? You mentioned that “it’s not the early 2000s anymore.”

Yeah, I mean just right off the bat, people don’t do group calls on landlines anymore and so we have more social media aspects in the show. It is wild to come back to this after the pandemic, after a year and a half. We’re putting on our costumes and we’re like “Wow! Would Regina even wear skinny jeans anymore?” It’s so crazy…the best thing about it, and why I think the movie is still so successful and why the musical is successful is [that] even as our show gets older and older, bullying, unfortunately, is still existing in almost exactly the same ways. You know like the vernacular of how people treat each other in high school when we’re all so insecure and looking for a laugh or looking for people to like us. That never changes, whether the costumes or the words change, or the music or the social media, those things still last throughout.

Mean Girls plays at The Paramount Theatre November 16–21, 2021. Tickets are nearly sold out and are available online.

Aamina Mughal is a sophomore and student writer in the Greater Seattle Area. She attends Eastside Preparatory School where she competes on their debate team and her work has been published on the TeenTix blog. She’s a music enthusiast who spends her time writing about art, thinking about it, or trying to make it. She serves on the Youth Advisory Board at the Museum of Pop Culture as a self-described pop-culture nerd.