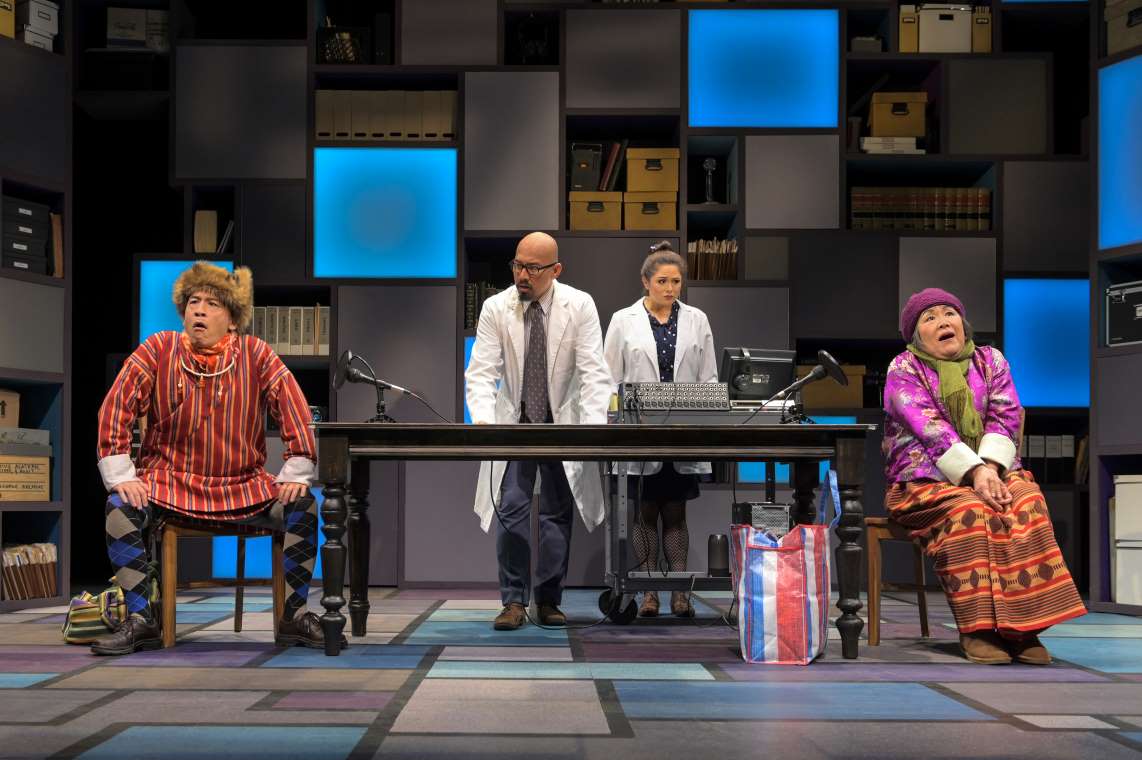 The cast has a confusing recording session in 'The Language Archive' now playing at TheatreWorks. Photo by Alessandra Mello

To say Jeffrey Lo wears many hats would be an understatement. Not only is he the casting director of TheatreWorks Silicon Valley, he’s also the director of The Language Archive and a playwright in his own right. “I’ve been fortunate to hold many roles at TheatreWorks,” Lo said, “and the joke is by the time my new business cards get printed, I’ve already changed titles.” I had the pleasure of speaking with Lo over the phone as he headed into tech rehearsal for The Language Archive, which opened July 10.

Danielle Mohlman: Can you share a little bit about The Language Archive? What drew you to this play initially? And why this play now?

Jeffrey Lo: You know, The Language Archive is a play that I have actually been trying to get the chance to direct for about ten years.

Yeah. I find this play to be one the most beautifully written pieces of theatre I have ever come across. It’s a play about both the beauty and possibility of language, but also the limitation of language. It’s about allowing human beings, as messy as we are, to express ourselves and share how we’re feeling with one another.

And I find that to be so beautiful. So much of this play lives in this world of beautiful coincidences and things happening for a reason. And I think that me getting the opportunity to do The Language Archive now, as opposed to any other time in the ten years that I’ve been chomping at the bit to work on this play, lands in line with that “everything happens for a reason” theme. The first time I ever saw a staged reading of a play was a workshop reading of this play—while it was still in development.

I was still an undergraduate aspiring playwright and director at UC Irvine. And I just found myself in awe of the language and in awe of the process of a stage reading. I had never seen that before. There was a playwright in the back, Julia Cho, who was taking her notes and revising things as she was going. And there was a group of actors who had three rehearsals beforehand and were just beautifully performing this intense language on stage for us. And I was just in awe of it.

After I finished college, I had my directing apprenticeship at the Oregon Shakespeare Festival and they were doing The Language Archive. So I ended up getting to observe and assistant direct that play and Julia Cho was in the room there. And I fell in love with that play all over again. This was in 2011, maybe my first or second professional theatre job out of college. And it was a time where, outside of school, I had interacted with very few artists of color. That experience working with Laurie Woolery, who is a Latinx director, and the way she mentored me, the way she spoke to me really made me feel like I belonged.

It’s one of those things where everything about The Language Archive has just made it so I have to direct it. And to be able to do that as the first show of the 50th season at TheatreWorks—the final season of Robert Kelley, who I have worked for basically my entire professional career—it’s a real honor.

I rambled. I’m so sorry.

No, that’s really beautiful. All of that was so wonderful. You have such a long history with this play. I’m like, oh my god, can I come see this play?

Oh, please do. Please do.

What is it about TheatreWorks that keeps you coming back? I don’t want to put the words “artistic home” in your mouth, but you did say that like you’ve been there your whole professional career, so what is it that keeps you engaged in TheatreWorks and excited to come to work every day?

I’ve learned that TheatreWorks’ culture is rare. I didn’t know this until I started to work as a freelancer at other theatres, but so much of what draws me to TheatreWorks is the culture that our Founding Artistic Director Robert Kelley has created. I don’t think he ever imagined TheatreWorks was going to become as large as it is today. I don’t think that he ever imagined that, fifty years later, he was going to be on stage at Radio City Music Hall holding up the Regional [Theatre] Tony Award. He really runs this company as just a group of friends just wanting to put on some plays. And as the company has continued to grow, although there’s a lot more paperwork, that feeling of we’re just buddies trying to put on some art that we feel passionate about is still tangible within the room. And I think that’s what keeps me coming back. Because I now know that that’s not how it always works out.

I’m sure people ask you this all the time, but it’s easy to think about Silicon Valley as this tech magnet. But I know that it’s so much more. How do you marry the startup and tech culture of Silicon Valley with the artistry and exploration of theatre in your work?

I’m born and raised in the Bay Area and it’s pretty wild to see how quickly it’s changed. I think once we’re able to engage folks who work in the tech and startup industry, that’s going to allow our art to flourish even more than it already is. But having said that, I like to think that I run my rehearsal room in a way that the most exciting—and safest—tech startups seem to work. I want all of my artists [to] feel like rehearsal is a safe place to take your biggest risks, to be as creative as possible. That way, we can find the most interesting ideas together.

Jeffrey Lo Realizes a Decade-Long Dream with ‘The Language Archive’