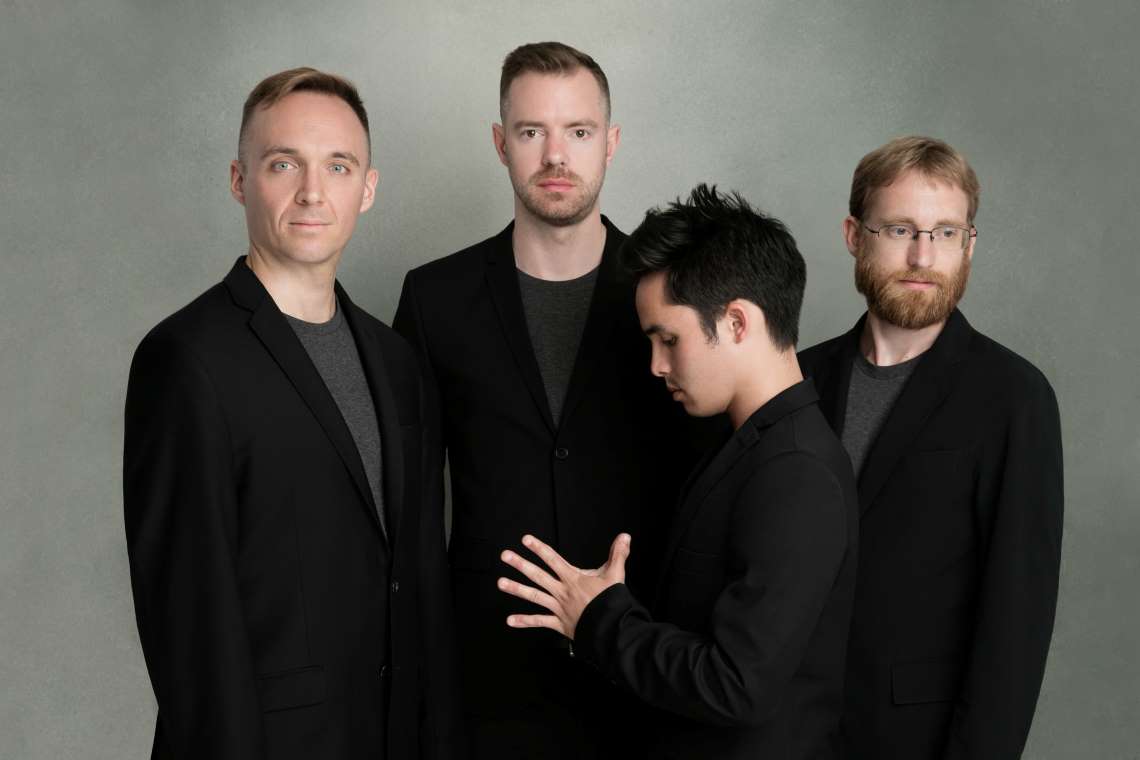 An innovative collaboration between the JACK Quartet, neuroscientists and educators at the University of Washington is preparing for a performance at the intersection of science and music. After three years in the making, Human Subjects is ready to make (brain) waves.

When the JACK Quartet premieres Human Subjects by composers Richard Karpen and Juan Pampin later this month, they’ll be totally wired—literally. The quartet, whose extended three-year residency at the University of Washington culminates in the concert on May 18, will be performing this world premiere composition while wearing portable encephalophones (also known as EEG brain helmets) and attached to wearable muscle neuron sensors.

During the upcoming performance at Meany Hall, the sometimes musical, sometimes noisy response of the JACK Quartet’s brainwaves will add another layer to the composition of Human Subjects. While Karpen and Pampin’s score has been meticulously composed—and the musical response of brainwaves has been considered at every stage of the process—there’s still room for improvisation and reaction in the JACK Quartet’s performance. It’s this musical unknown that’s made the three-year collaboration with the University of Washington’s Music Composition and DXARTS departments so exciting.

Karpen, one of Human Subjects’ co-composers, is the founding director of the university’s Center for Digital Arts and Experimental Media (DXARTS) in addition to serving as director of the University of Washington’s School of Music. DXARTS, created in 2001, was designed to support a new generation of hybrid artists, creating opportunities for artists to learn in the ever-evolving field of digital arts. Pampin, Human Subjects’ other co-composer, is the associate director of DXARTS, where the JACK Quartet has been collaborating with Pampin and Karpen, several neuroscientists and a team of researchers.

John Pickford Richards, viola, wants to encourage audience members to rid themselves of expectations and let the experience of Human Subjects wash over them. “We like to say we’re controlling the music with our minds, but really, we’re making music with them.”

JACK Quartet started performing at the University of Washington over a decade ago—and in that time, the idea of developing brain-controlled music with composers Karpen and Pampin slowly began to form. When the Meany Center received a Mellon Foundation grant in 2016, the three-year JACK Quartet residency was born. Most of the residency was spent wearing those encephalophones and experimenting with improvisation.

“We certainly had no idea what would come of it,” Richards said, “but we knew it would be experimental, which is our general preference.”

After an extended period of research and development, the team set their sights on creating a concert-length work.

“Most music we play is composed in traditional western music notation, but this piece has developed slowly through discussion and trying things out,” Richards explained. The performance audiences see and hear on May 18 will truly be a once-in-a-lifetime experience.

Wulliman hopes that audiences will leave Meany Hall curious about sound and fascinated by the pathways JACK’s brains travel in order to create the musical labyrinth on stage.

“We had a hilarious time testing the Boulez quartet for our readings on the EEG,” Wulliman said, recalling his first visit to the University of Washington as a newly minted member of JACK.

The quartet experimented with form: first playing the quartet normally, then simply moving their arms as they followed the music, and finally, just thinking about the song—all while wearing the portable encephalophones.

“This was some of the foundational data for building the electronic instrument as it stands now,” Wulliman said. “My favorite memories from that first trip are running through the Arboretum and drinking a wonderful martini at Flowers.”

While it’s often said that science and music are the universal languages of our planet, making Human Subjects an incredible blend of the two. But Wulliman prefers to examine the individual nature of music.

“I see the personal and empathic in each individual work of art,” he said. “This piece, by its very nature, becomes personal and specific to us and our bodies as performers.”

JACK has been visiting the University of Washington since 2009, with residencies ranging from reading student work to public performances. It was there that they met Karpen and Pampin, who invited the quartet to join them for a three-year extended residency. The technology itself was alluring, but JACK was also drawn to the amount of time they’d be able to spend on this single concert-length piece.

“This work is different from most of our other premieres in several respects,” Christopher Otto shared. “First, there’s obviously new technology involved that we haven’t worked with before. Second, we’ve spent much more time immersed in the collaborative creation of this work than we have with most pieces. Third, the composition has not involved any kind of notation, but rather relies on a dialogue among the creators about the different types of musical situations we will navigate.”

When Otto learned that the quartet would be working with EEG, the concept peaked his curiosity. Otto was familiar with the composer Alvin Lucier, whose 1965 composition Music for Solo Performer involved Lucier hooking himself up to borrowed scientific equipment in order to amplify his Alpha brainwaves and operate sixteen percussion instruments. It’s a fascinating piece (11 minutes of which are available on Youtube) but Otto knew digital music technology had advanced significantly since then.

Otto shared that there are several challenges and joys that come with the experimental nature of Human Subjects, but the biggest challenge has been enduring the physical pain that comes from the sharp electrodes pushing on his skull. But it’s not all pain. Learning how to control the electromyography (EMG) armbands to manipulate JACK’s instrumental sound was a joyful experience.

“I’m interested in the ways that sound as a material, governed by physics, can interact with the human psyche,” Otto said. He added that he’s been interested in mathematics for a long time, and that this interest informs the music he composes.

“There are endless possibilities, and most of them are found through improvisation and conversation,” shared Jay Campbell.

The biggest joy Campbell is finding in the Human Subjects process is the room for experimentation.

“The collaborative aspect of this project is really fun,” Campbell said. “We can improvise with these tools and find novel sounds—or we can just ask if certain sounds could be coded in to correlate to specific physical actions.”

Campbell is fascinated with the relationships between brainwaves and sound, especially when it comes to making music and composition a more accessible form for people with disabilities. These same instruments that JACK is experimenting with at the University of Washington could one day serve as creative outlets for folks unable to sing or operate traditional musical instruments.

“We’re all just kind of playing around with these really complex toys, tweaking and honing it towards something that has expressive capacity,” Campbell said.

When asked what they’ll miss most about Seattle, Otto cited the Henry Art Gallery, particularly The James Turrell Skyspace, Light Reign. For the rest of the ensemble, what they’re going to miss doubles as a restaurant recommendation: Din Tai Fung.

Human Subjects will be performed at the University of Washington’s Meany Center on May 18 at 7:30 p.m. Tickets are $10 for students and seniors, $20 for the general public and can be purchased online or by calling (206) 543-4880. More information about the JACK Quartet can be found on their website.