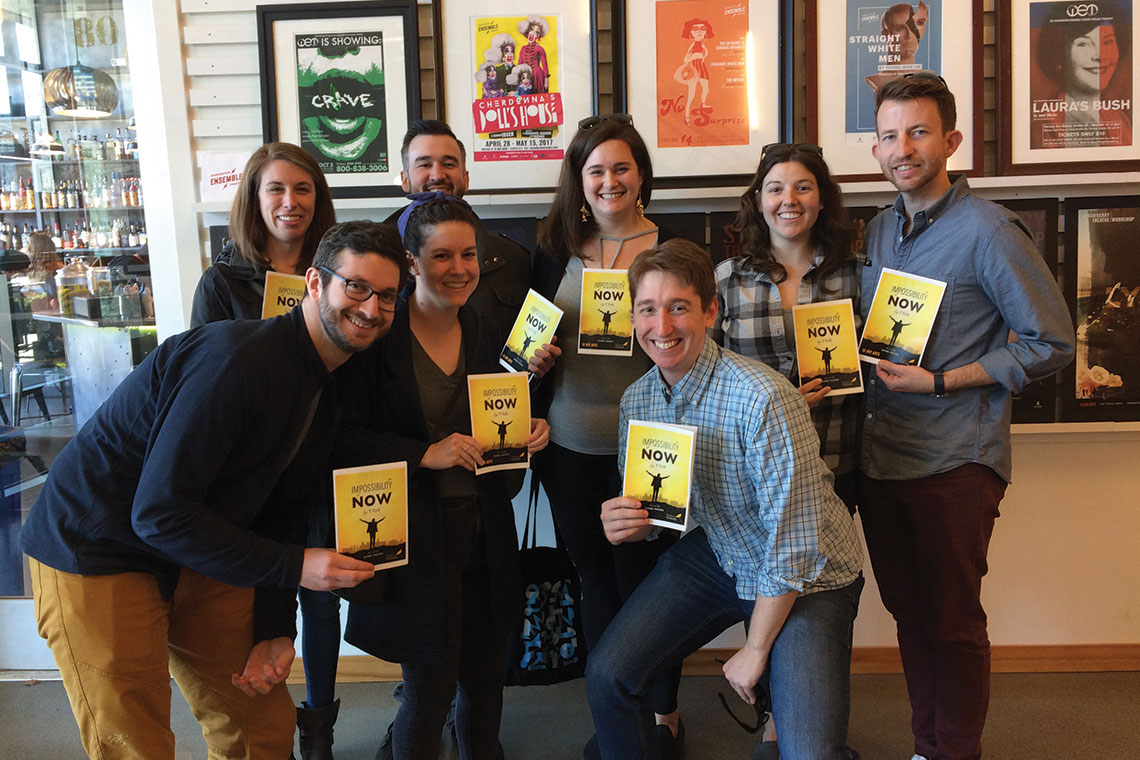 Danielle Mohlman (center in blue headband) with a group she arranged to see The Impossibility of Now by Y. York at Thalia’s Umbrella. Courtesy of Danielle Mohlman

Playwright Danielle Mohlman reflects on a three-year effort to bring Millennial audiences to Seattle theatre and her hopes for the future of this theatre group.

When I moved to Seattle in 2015, I didn’t know anyone involved in theatre. In fact, I didn’t know anyone who even enjoyed going to the theatre. So rather than learn a new city and the seemingly infinite number of theatres that came with it all by myself, I made a rational choice: I created a group for Millennials to experience theatre together.

The first outing I planned was to see Come from Away at Seattle Repertory Theatre in December 2015. Only two friends joined me in the audience that night, but it remains the most talked about outing—even three years later. But here’s the thing: I didn’t know Come from Away was going to blow up the way it did. I couldn’t have predicted a cast album, a Broadway run and a national tour that sells out houses almost every night. And I remind these regretful friends of this fact: I can do all the research in the world, but at the end of the day I’m inviting them to take a chance on a new play with me.

I started with an email list of ten Millennials who wanted to give theatre a try. The list has now grown to forty theatre lovers, including folks who work in the industry but want to make friends while seeing new plays. The group started as a pay-what-you-can experience, but we’ve moved away from that as folks become more comfortable spending money on theatre. And while the original scope was broad—“Let’s see some plays!”—we now exclusively attend plays written by female and non-binary playwrights, playwrights of color and LGBTQIA+ playwrights.

“You have been a huge influence on me from an arts perspective,” Greg Socha, a marketing manager in his early 30s told me. “My go-to entertainment option used to be microwaveable popcorn and Netflix. And it still is. But I’ve realized that I love having the theatre as something to look forward to.”

Over the summer, I talked Socha into subscribing to the 5th Avenue Theatre with me. They were running a special on preview performances and I, knowing what a big fan of musicals he is, immediately reached out to him.

“I was counting down the days until we saw Come from Away—so worth it,” Socha said to me. “At this point, I’m getting more comfortable with actually making arts plans. I’ve even invited you to stuff!”

It’s true. Last season, Socha went with me to see two shows, The Impossibility of Now at Thalia’s Umbrella and Patti & the Kid at On the Boards, neither of which we connected with. It turned out our favorite show all year was Two Trains Running at Seattle Rep—a play that Socha invited me to.

“One year ago, I wouldn’t have even considered going, or at the least would have talked myself out of it but knowing that I had a theatre buddy made me reach out,” Socha said. “When we actually got to the theatre, I would say that I was nervously excited. I was hoping we would have a good time, but you never know.”

Socha was put at ease five minutes into the performance and at intermission we were both beaming.

Siddhi R. Ghai, a volunteer festival coordinator at Tasveer, has been with this group from the beginning. While she was living in India, she’d often see one or two plays a month. When I learned about Pratidhwani, Seattle’s only South Asian theatre company, I knew that Ghai was going to be a fan.

“The few Pratidhwani plays we went to, Queen and A Small History of Amal, Age 7, were very interesting for me because I got to share a little bit of my culture with you,” Ghai told me.

She added that she loved getting all the cultural references without having to think about it. When we attended A Small History of Amal, Age 7 earlier this season—a play Ghai invited me to—she grabbed my arm as soon as we walked into the theatre. She was having a visceral reaction to the sound design—audio from a train station in Mumbai, the city where she grew up.

When I asked her what it’s been like to see plays in a group setting, with people she may or may not know, her response was overwhelmingly positive.

“Before meeting you, I never had the opportunity to discuss plays with a diverse group or people who I don’t know,” Ghai said to me. “It’s so interesting to get different perspectives because I feel it helps us expand our own cultural horizons.”

Jennifer Voorn, a manager of product management in the healthcare IT sector, has also gotten a lot out of these group outings. She’s part of the theatre group’s origin story and, along with Ghai, attended that first performance of Come from Away with me. In the last year, she’s come with me to see The Crucible and The Wolves at ACT Theatre, Native Gardens at Intiman Theatre and The Impossibility of Now.

“I have greatly enjoyed meeting new people and hearing their perspective,” Voorn said. “I also enjoy experiencing the different levels of response a group can have to the same piece of art, in terms of what can make someone laugh, cry or be visibly uncomfortable. It’s amazing how the same piece of art can impact people so similarly—or so differently!”

Last season, Voorn took visiting family to see Into the Woods at Village Theatre. And, of course, she took a chance on some last-minute tickets to see Hamilton with her husband at The Paramount.

“We bought last minute tickets on SeatGeek thirty minutes before the show,” Voorn said. “I was so nervous we wouldn’t make it to the venue on time. Once we arrived downtown, the smile on my face was so big. I will always remember that night.”

Melissa Herrett folded into my theatre group when she moved to Seattle in 2016, but a new dog and a job that requires her to travel has prevented a more consistent theatre habit.

“I do see more shows now but that’s mainly because you invite me,” Herrett told me, adding that she wants to start bringing theatre into date nights with her boyfriend, substituting plays for the standby of dinner and a movie.

Herrett did see Lauren Weedman Doesn’t Live Here Anymore at ACT and The Impossibility of Now with the group this year.

“I prefer seeing shows with other people because my favorite part about them is being able to discuss after the fact,” Herrett said. “It’s nice to go together so you all have the experience of seeing the same performance. It would also be interesting to discuss a show that someone saw on a different night or at a different theatre and discuss how things varied from performance to performance.”

“I think it’s really fantastic to go see plays with a variety of people,” Spiegel said. “I think the people around you can really influence the show—not just the people you know there but the rest of the audience as well.”

Spiegel attended group outings to see The Wolves and The Impossibility of Now. For The Wolves, Spiegel stayed with me to participate in the post-show discussion, which meant a lot to me.

relatively little context or background knowledge,” Spiegel said. “It’s great to see the show with a group that has fresh eyes to digest and talk about it afterwards.”

I have big dreams for the future of this group. I average about one theatre outing each month, but I’d love to get to a point where those outings happen on a day that people can count on—the first Wednesday of the month, for example. I’d love to create partnerships with local restaurants, so audience members can gather for a discounted drink or appetizer after the show and talk about what they just saw. I’d love to expand my network beyond Millennials I know, encouraging regulars to bring a friend along each time. And I’d love theatres across Seattle to work together to incentivize a younger audience base, rather than treating ticket sales like a competition for resources.

But for now, while this is still an endeavor run by a volunteer staff of one, the most important thing I can do is keep planning events.

I wish I could say that in the last three years, the group has grown exponentially and that every single event is a rousing success. But that would be a lie. Sometimes I email my group of forty and the only person who responds is my husband. Sometimes I can’t even get him to come with me. But I keep coming back, I keep putting in the work and I keep growing my network. Because I know these audience members count on me to take a chance on something new with them. And that’s enough to keep me going.

How to Start Your Own Arts Group

Excited about introducing your friends to more art? Start your own group for art lovers.

Danielle decided to choose theatre as her group’s focus, but yours could focus on dance, the symphony or even museums! Identify folks in your friend group who are curious about your passion and you’re on your way.

Identify a performance that’s interesting to you and check Goldstar and TodayTix for discounts before you buy. Most performing arts organizations offer discounts for groups of ten or more, so be sure to check in with the box office if your group is large enough.

Make a night of it.

Invite your group to get dinner before the performance or gather for a post-show drink. Not only is it a fun way to create community, it’s also the perfect place to download what you’ve just seen or excitedly anticipate what you’re about to see.

The key to a successful arts group is to just keep scheduling outings. Not every outing has to be a roaring success with fifteen of your friends. Sometimes only one or two others will be able to attend. That’s okay! Any opportunity to introduce friends to art is a success in our book.