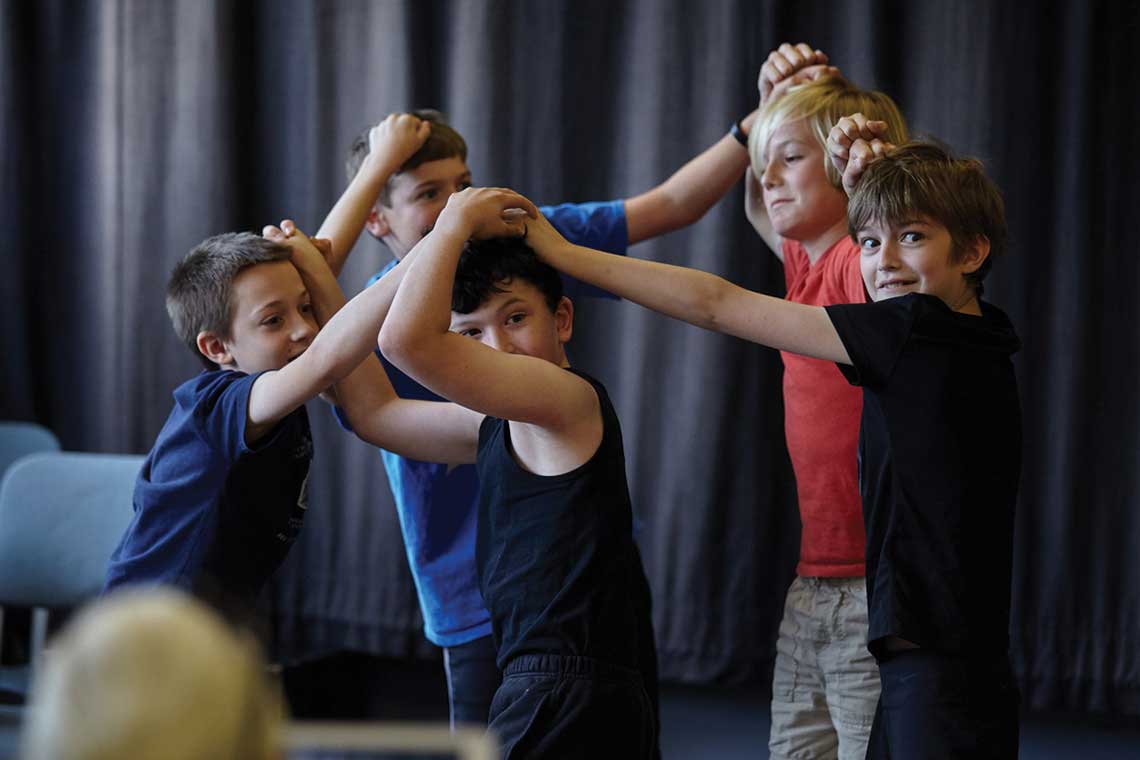 Many parents and students are looking to get back in the summer camp game in 2022. Two excellent organizations which provide a variety of summer courses are Seattle Children’s Theatre (SCT) and Seattle Shakespeare Company, both near synonymous with arts education.

“Sometimes theatres start up and then they add an education program later,” said Seattle Shakespeare Education Director Michelle Burce. “Seattle Shakespeare has had one the whole time.” One side of this education is Seattle Shakespeare’s Camp Bill, a series of workshops including a full theatre production intensive for middle and high school aged students. During these three week camps, students rehearse and perform shows, while also designing costumes and building sets. This summer, it’s Macbeth.

“Students get to play with love, hate, ambition, mistaken identity and comedy. That’s a great outlet.” Burce pointed out that this relatively short time frame for a full production allows students to think on their feet and take control of the situation. In a professional production, there’s not just more time to rehearse—when actors begin such a rehearsal, there are fully formed costume designs and built sets. In a Camp Bill production intensive, however, it all happens at once. For Burce, this pace connects to the ephemeral, imaginative, and problem-solving aspects of theatre.

It was the COVID-19 pandemic that made this understanding really sink in for Burce. In the Summer of 2020, Camp Bill happened fully remotely. That year, campers participated in productions of A Midsummer Night’s Dream and The Tempest. Students rehearsed over Zoom, filmed themselves individually, and then were edited together. Boundless creativity sprung from this unideal situation. In The Tempest, there’s a scene where a wandering Trinculo comes across a blanket-covered Caliban. “What have we here? A man or a fish?” asks Trinculo incredulously. This scene, ripe with interesting visuals, is one that should be challenging to execute in a virtual setting. However, two campers had a trick up their sleeve. “They found out that they had matching towels at home that were close enough,” Burce said. A camper stowed his sister away under his towel with her feet sticking out, while another camper filmed themselves beneath their own towel. In the complete and edited scene, it seemed just as if the two campers were in the same room.

In the Summer of 2021, Camp Bill returned to in-person programming. Traditional Shakespeare plays tend to necessitate close physical contact, so to ensure that the transition back to in-person camp was safe, Seattle Shakespeare took multiple mitigating steps. 2021 was entirely outdoors, and, instead of a full production, students worked on individual scenes. This meant the wondrous sets and costumes that often accompany Camp Bill production intensives weren’t there. Once again, students and teachers rose to the challenge, incorporating elements of the natural scenery that surrounded them. “In theatre you try to bring audiences into a magical world, but in 2020 and 2021 there weren’t traditional means to do that,” Burce stated. Making a magical world with the tools available, no matter what they are, encapsulates Camp Bill’s ethos.

Like Seattle Shakespeare, Seattle Children’s Theatre’s department of education and engagement has stayed very active during the pandemic. In the Summer of 2020, all camps and classes were virtual. I spoke with Johamy Morales, the director of the education and engagement department, and Caitlyn Davis, who, among other things, is the drama school camp czar. For Morales and Davis, this pandemic period did have benefits. There are expansive things that you can do remotely, “You can get teens in Florida, teens in Philly, and teens in Seattle in a space together to create and share ideas,” said Davis. Not only did teens connect with the programs remotely, educators and professionals from far and wide were able to bring their expertise to SCT virtually. Additionally, courses that had not been previously offered, such as creating through social media and the art of drag, became available during this remote period.

When SCT returned to in person in 2021, safety was prioritized. SCT’s programs operated at just 25% capacity. This way, if county restrictions changed or a variant came, campers would not be left in the lurch. This, combined with still requiring masks and implementing innovative social distancing tactics, resulted in a very successful summer. Just over 950 students participated in summer programs, and there was not a single COVID case. SCT continued to provide a virtual option, too. “We’ve been very thoughtful about the way we’re scaling in and scaling back into in person,” said Davis. “We feel really confident that this coming summer we have a very strong structure to maintain everybody in a safe environment with the challenges of COVID while also continuing to provide a unique experience for young people to come in and learn and play with us.”

This commitment to access guides the department’s actions. Morales shared with me her personal story, how she had not had an opportunity to engage with theatre early on. She eventually began a program in San Diego where she and others perused various topics and then developed a piece with a director, taking these performances from school to school. “For the first time, I felt like my voice had power and my actions had meaning,” Morales said. “If I had the opportunity to experience theatre at a young age, and the power of storytelling, I can only imagine where I would be right now.” Morales and SCT in its entirety are committed to giving back. Both SCT and Seattle Shakespeare offer financial aid scholarships and make their availability well known.

Arts summer camps are a potent environment for community building. “Our students come together and form a community and form relationships in a way that is really special in arts summer camp. You work really intensely with other people, but also get to go through all of these emotions and challenges and risks with an ensemble, and build friendships you might not get in the same way at school,” said Burce. “It’s not just about getting kids in the room and doing a scene,” said Morales. Indeed, it’s about the connections, sometimes lifelong, that are made.

This summer, both SCT and Seattle Shakespeare will be fully in person. Camp Bill’s three camps, including the production intensive, will happen outdoors, at Mercer Island’s lush Luther Burbank Park. SCT offers dozens of courses, at varying locations, all providing students with excellent opportunities for exploration. Registration for this summer is open now.

Josh Caplan is a Junior at The Northwest School in Seattle. A member of the TeenTix Press Corps and a three-time participant in the TeenTix Arts Podcast, he is thrilled to have the opportunity to engage with arts journalism. Along with covering arts events, Josh is a DJ with KEXP’s 90.TEEN program. He also enjoys playing and listening to music, reading up on sustainable agricultural practices, and a good cup of coffee.

This article was written on special assignment for The Seattle Times through the TeenTix Press Corps, a teen arts journalism program sponsored by TeenTix, a youth empowerment and arts access nonprofit organization.