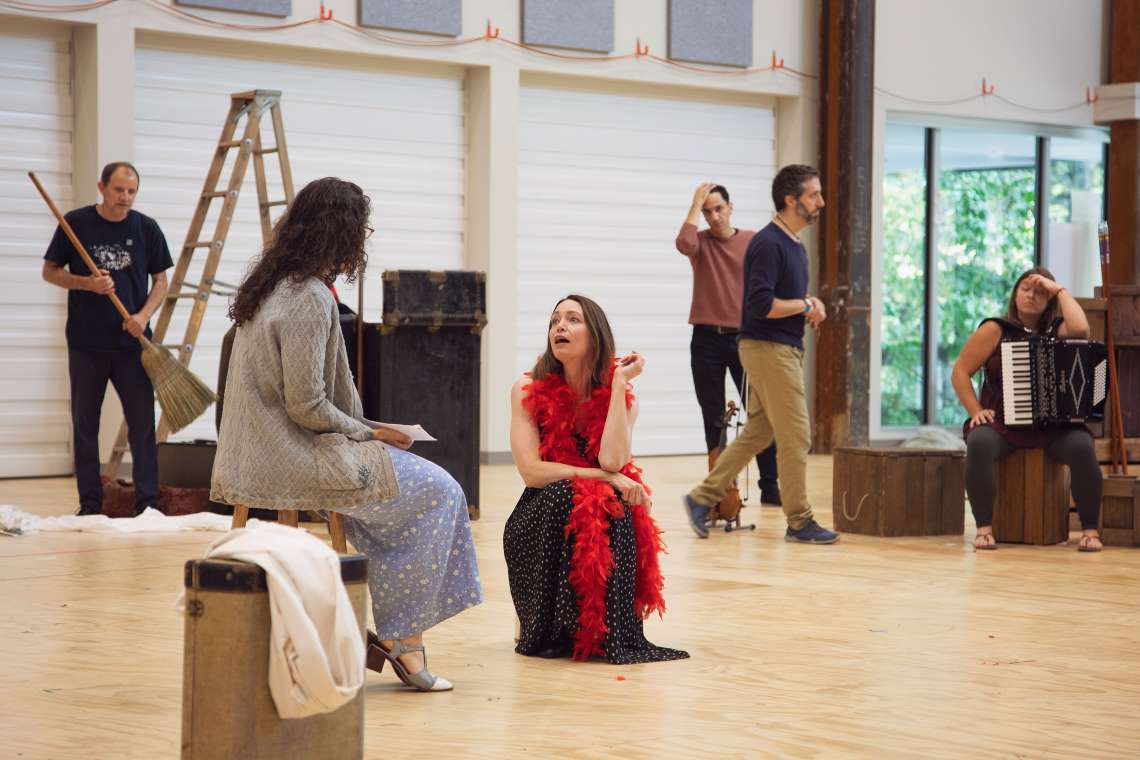 When Indecent opened at Seattle Rep on September 20, it marked a pretty significant first: the first time this theatre has produced a play by Paula Vogel. Vogel, who’s arguably one of the most prolific and produced contemporary playwrights of our time, has been seen in recent years at Taproot Theatre Company (A Civil War Christmas: An American Musical Celebration, December 2017) and Strawberry Theatre Workshop (How I Learned to Drive, June 2018). But as I combed through Seattle Rep’s production history, it became more and more clear that Paula Vogel’s Seattle Rep debut is long overdue.

Indecent, which was the seventh-most produced play in the country during the 2018-19 season, according to the Theatre Communications Group—and is likely to remain in the top ten this season as well—explores the storied production history of Sholem Asch’s God of Vengeance. Vengeance, which was first read at a salon in Poland in 1906, was met with fear and animosity from the start. The Jewish patrons of the arts in Poland refused to support a play that showed Jews behaving immorally—communing with prostitutes and desecrating the Torah, to start.

In an imagined meeting between stage manager Lemml and playwright Eugene O’Neill, one that alludes to O’Neill’s actual defense of God of Vengeance in an obscenity case, Vogel writes, “They’re gonna claim they’re closing it because of Homosexualis. That’s bunk. They’re closing it because the play shows that every religion—even Jews—sell God for a price.” Because, you see, God of Vengeance was the first Broadway play to feature a romantic scene between two women.

Rabbi Dana A. Benson, director of youth and family learning at Temple Beth Am and an avid theatre fan, was kind enough to speak with me about the themes of Indecent and what it means to have queer Jewish representation onstage at Seattle Rep. Because so much of the play is about identity, we began with hers.

“Ultimately, if we wanted to go along the Game of Thrones lines of naming ones identities as part of a title,” Rabbi Benson said, “mine might read: Rabbi Dana Benson, Hufflepuff, soft Butch, partner of roller derby playing librarian, daughter of Jewish-Hungarian lineage, child of compassionate and kind parents, singer of Broadway, creator of spiritually accessible learning opportunities, hoper for a better world, and willing mentor and guide for all learners—especially those who feel wayward—as they grow into their best self.”

Temple Beth Am is considered a Welcoming Synagogue, meaning they’re not only actively creating inclusive space for LGBTQIA+ folks, they’re also striving for a truly diverse leadership—from the synagogue’s staff and board to their student leaders. Rabbi Benson admitted that there’s still work to do, but that Temple Beth Am is committed to putting in that work every day.

One of the central plot points of Indecent is that the Jewish gatekeepers in early 1900s theatre refused to support Sholem Asch on God of Vengeance’s production. Not only did they disapprove of the female love interests—a moment played for laughs in Vogel’s script as the men in the initial 1906 salon reading keep refusing to read the female roles—they were scandalized by the final moment of the play: a desecration of the Torah. And while Asch’s contemporaries are certainly pleased that he’s writing Jewish plays—and in Yiddish!—they cannot bring themselves to support theatre where Jews are portrayed as anything less than perfect. “Why must every Jew onstage be a paragon?!!” Asch exclaims, angry at the very suggestion.

“…I still think there is still this sense of pressure, with none of us wanting to do something that would reflect badly on the Jewish people. That’s very much true of our tradition.”

Rabbi Benson shared that this conversation surrounding “immoral” Jewish characters being considered anti-Semitic is still very much alive today. “I think it’s less about anti-Semitism as it is about portraying other Jews badly,” Rabbi Benson said. “There is this concern about how we are portraying ourselves because it may not be understood outside our own community. I think this goes back to, you know the reference in Wet Hot American Summer, and jokes that are missed and jokes that are in-group and the way that they’re coded for us to see or hear. Or Larry David’s character in Curb Your Enthusiasm—or Seinfeld. At what point is it humorous? Is it fun? Is it a laugh that’s both in-group as well as transcendent?”

Rabbi Benson thinks that the modern concern of any one Jewish character’s portrayal is more about it being “bad for Judaism.” “I shouldn’t speak on behalf of the Jewish community,” Rabbi Benson said, “but I still think there is still this sense of pressure, with none of us wanting to do something that would reflect badly on the Jewish people. That’s very much true of our tradition.”

Andi Alhadeff, who plays Chana, and Cheyenne Casebier, who plays Halina, were at the very beginning of their rehearsal process when we spoke about the central themes of Indecent. But it was clear that the play had hit a visceral chord for both actors.

“I love that this play celebrates community, love and risk,” Casebier said. “It speaks to different forms of persecution and loss—and being the other. We couldn’t be more ready, as both a culture and society, to share and listen to this story.”

When Alhadeff first encountered the play, it felt like the stories these characters were telling already lived deep inside her bones. “On top of being one of the most hauntingly stunning plays I have ever seen or read, there was something about this show that simply felt as though it was a part of me,” Alhadeff said. “As a Jewish woman, I can certainly speak to the importance of representation of Jewish stories, particularly ones that move away from creating caricatures of obtuse archetypes or solely hold up our scars and our history of tragedy. There is so much joy in what it is to move through different layers of love in Indecent,which is a complex and beautiful lens that honors any community you view it through.”

Alhadeff shared that exploring the emotional center of the play—the relationship between Chana and Halina and the many forms it takes—has been the easiest part of the entire process. She credits the safe rehearsal room and the respect of her fellow cast members. “I feel seen and cared for by my colleagues,” Alhadeff said, “and that is a formula for the precious and ordinary kind of magic that is human connection.”

When I asked her what it meant to create queer Jewish theatre in Seattle, Daniels responded that it means everything. “I teach,” Daniels said, “and to know students of mine who inhabit one or both of those identities will get to see themselves onstage makes me proud to be a part of it.”

In preparation to direct this play, Daniels went to Poland on a research trip. A significant amount of Indecent takes place in the Bałuty district of Łódź and Daniels was fortunate enough to spend a day with two locals there.

“We ended that day at Radegast station where they have a replica of a train car the exact size they shipped people in,” Daniels said. “They were tiny. The scope of what all of humanity lost when we lost so many souls in the Holocaust.”

But Daniels brings intangible and unexplainable moments into the Indecent rehearsal room too, like her walk through Auschwitz. “I can feel the ashes beneath my feet just sitting here,” Daniels said.

The play begins with ash spilling out of the actors’ sleeves, a moment that Daniels sees as a reawakening. When she read that stage direction for the first time, she was transported back to a moment thirty years ago, feeling the ash of her grandparents—feeling life sift through her hands.

When I brought up this moment in the play with Rabbi Benson, she turned to a quote from the Talmud, the body of Jewish law.

“Rabbi Simcha Bunim said to one of his students ‘You should always keep two pieces of paper, one in each pocket,’” Rabbi Benson paraphrased. “‘The first should say The world was created for my sake and the other should say I am but dust and ashes.’ And that’s to always remind us to live somewhere between humility and divinity. If we live in that balance, perhaps we can offer a little more kindness to the world.”