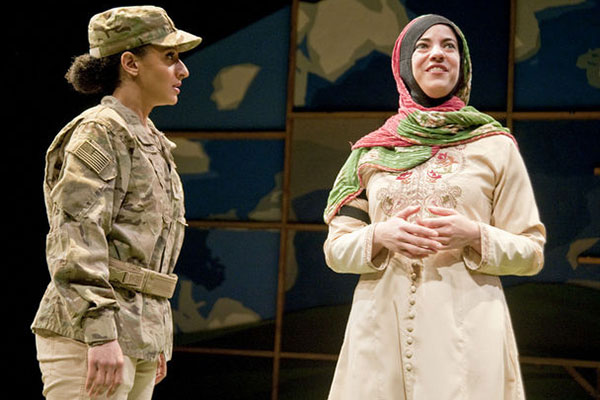 “Everyone starts out a stranger,” says Allison Strickland, a lead actor in Taproot Theatre’s new production, In the Book Of. “To people. To places. To experiences.” Stranger no longer to Seattle’s theatre scene, Strickland is eager to share to audiences this rarely seen play, written by John Walch and directed by Scott Nolte.

For those unfamiliar with In the Book Of, it’s based loosely on the Book of Ruth, a slim book in the Old Testament. It centers around Lieutenant Naomi Watkins (Strickland, and her Afghan translator Anisah, played by Carolyn Marie Monroe. They’ve both lost husbands in the war. “Without giving too much away,” Strickland gives away, “Naomi ends up briging Anisah back to her small town in Mississippi.” It’s there that they both encounter love, healing, and, Strickland says, “What it truly means to embrace life in all of its ups and downs.”

Strickland, who has performed as Hermia in A Midsummer Night’s Dream at Seattle Shakespeare Company and as Rose Rose in Book-It Repertory Theatre’s production of The Cider House Rules Pt. 2, is performing for the first time in her life on Taproot’s stage. “It’s been a great process and, honestly, they’re some of the nicest people I’ve ever met. They make sure you feel like you are part of their family from day one.”

The role hit her before she knew it. “It came out of the blue, really,” Strickland says. Some mutual friends put Scott Nolte in touch with her. “I came in to read for him and a couple of days later I got the job!” She’s happy to have taken it. The most rewarding and challenging aspects of the role are one and the same. “We have a great military consult for the show named Erik. Through his stories of life in and out of battle, it’s made me realize what an honor it truly is to tell the story of so many servicemen and women.” She’s proud of her small part in recognizing the hard-working members of military. “We see them. We are grateful.”

What’s next for Strickland? “I can’t really say much but it’s pretty wild!” Suffice it to say, she’s currently doing some motion capture work with green screens and body suits for a video game still in development. Such is the life of an actor: a stranger in a strange land, until it’s not so strange anymore.