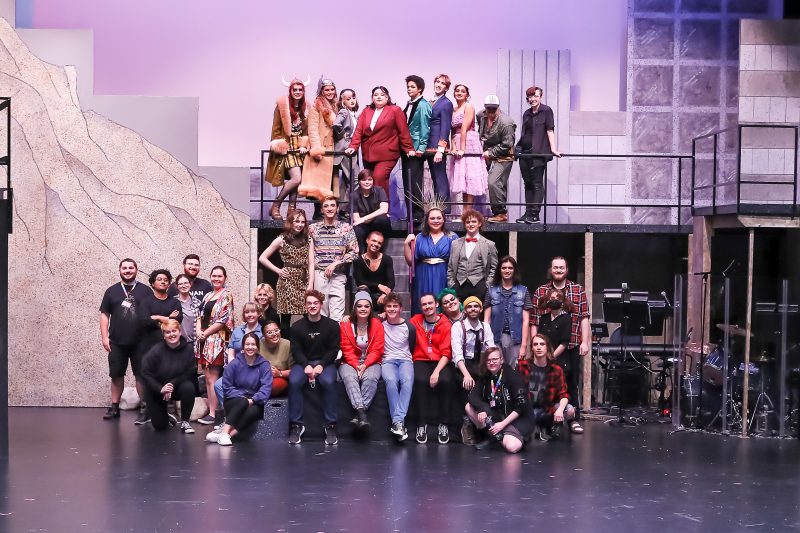 It’s not every day you see a musical in which a large portion of the creative team isn’t old enough to legally drink. This summer, Village Theatre is producing three.

“There’s not a lot of opportunities for young students to have artistic control over a production. What we strive for here are professional-feeling productions that are driven by youth. A big part of that is trusting that these students have the capabilities, vision and skills to be able to put together a show—what we do is provide resources, space, time and guidance.”

This is Joel Arpin, the KIDSTAGE production manager at Village Theatre Issaquah. He oversees every element of their productions from auditions and intern recruitment to facility management. Recently, I had the pleasure of speaking with him as well as young artists Lacey Jack and Rachel Faria to discuss Village’s Summer Independent Program, a unique project in which youth artists are given the resources to autonomously produce a show of their choosing.

“Village is one of the first theatres to trust kids,” said Jack, a KIDSTAGE veteran and incoming college freshman currently portraying Hope in this season’s production of Urinetown. “Most will hold your hand and as soon as you begin to take a step in the wrong direction, you’re done. Are there negatives to that? Absolutely. However, I don’t mind the mistakes because you’re either going to make them now or in 10 years when you’re finally on your own.”

Unlike most youth arts programs, the Summer Independent Program has been completely youth-driven from its inception. “Students came to us asking for the responsibility of being able to create a show on their own, so we turned the theatre over to them for the summer,” said Arpin. “We offer five shows a year in each KIDSTAGE location, but this is the only one that’s completely student-driven.”

“Students come forward in August/September to submit a proposal that contains three shows they would like to produce as well as why they think they’d be good choices based on ticket sales, messaging, etc.,” Arpin explained. KIDSTAGE’s slogan is “skills for theatre…skills for life,” so Village tries to create as many learning opportunities within the process as possible. “Students used to pitch an entire team, but we later decided to make interviewing designer applications a part of the process so students can build their interview skills—it’s very rare as a young adult that you’re the person learning how to interview.”

However, having such independence can be overwhelming. Faria, an incoming college senior and director of this season’s production of Spitfire Grill, claimed, “I sometimes felt a little bit lost and didn’t know exactly what to do next.”

In order to provide support, Village sets up mentors to help guide these young artists. “You can chat with your mentor when you have questions or need more guidance on how to approach a situation,” specified Arpin.

Faria continued, “It was nice to have advice, but we were never told ‘no’ outside of things due to budget or safety. It’s something you just can’t find everywhere else, to be able to do something at this scale in a way that feels so independent. It’s a huge learning experience for everyone involved.”

This also creates a unique opportunity for the actors, as this is the one program Village Theatre provides in which the focus is on the designers and director. Arpin stated, “We call it summer independent because the designers and director are independently learning and growing, but it’s also a chance for the student actors to no longer have direct professional support.”

“I was so used to working with adults,” Jack commented. “But it’s very exciting for me as an actor to work with these fresh minds because you can relate on more levels.”

Village also helps prepare young artists for the world of professional theatre by running rehearsals with equity rules. Jack emphasized, “Performing is so much more than the physical act onstage—it’s about learning how to deal with friends and how to talk to people as well as how to sing, act and dance. Village wants you to be a good performer, but they also want you to be a great human being.”

Inevitably, the COVID-19 pandemic heavily impacted the program. According to Faria, “A lot of [the artists] weren’t able to be in the same room until tech rehearsals.”

However, this unique situation had its benefits as well. “Typically, the Summer Independent productions are performed in houses with under 200 seats, so instead, we moved to our main theatres (500-seat houses where our mainstage productions typically perform), allowing us to sell 200 tickets, social distance, and be under 50% capacity,” Arpin shared. “This also allowed our students to work in a larger space with more access to equipment.”

Faria added, “We got access to all of these professional facilities including a fly system and construction space that you wouldn’t really expect for a production put on by a bunch of 20-year-olds.” The extraordinary opportunity to access such advanced technical equipment allowed for the designers to fully embrace their creative visions and learn how to operate professional equipment, demonstrating Village Theatre’s effort to do as much as they can to support these young artists.

The tasks of creating three completely youth-led productions and being one of the first live theatres to reopen are daunting individually, but the students learned to overcome both challenges and contribute to Washington’s cultural landscape as we begin to transition back to in-person theatre. As Arpin said, “The students this summer walked into a situation in which they didn’t know what it would look like and I am so proud and impressed by what they have put together.”

The Summer Independent production of The Spitfire Grill ran from July 9-18. Jasper in Deadland is running now through July 25 in Everett. Urinetown will run July 30–August 8 in Issaquah.

Kyle Gerstel is a 14-year-old theatre geek who couldn’t be happier to have found TeenTix in 2020. He recently directed his school’s first musical in over a decade as well as the online production Hamleton: A Quaranteen’d Musical. When not writing articles for the TeenTix Newsroom, you can find him acting in Youth Theatre Northwest productions, writing comedy songs, or obsessing over Bo Burnham.

In Kids We Trust