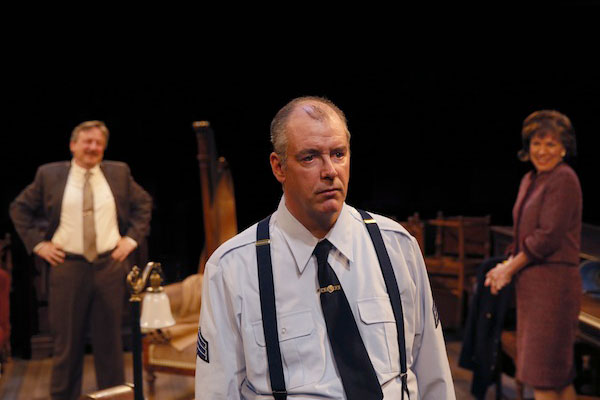 Arthur Miller, scribe of such watershed works of theatre as The Crucible, Death of a Salesman and All My Sons, is one of America’s most beloved playwrights. One of his lesser-known plays, The Price, centers on two estranged brothers—one a beat cop, the other a doctor—who are reunited in the attic of their deceased father’s brownstone to dispose of his furniture. Despite New York Times critic Clive Barnes’s assertion that The Price “is one of the most engrossing and entertaining plays that Miller has ever written” in his review of the original 1968 Broadway production, the play is rarely produced. Local stage favorite Charles Leggett is currently starring as cop Victor Franz in ACT Theatre’s production of the Miller classic, opposite Anne Allgood, Peter Silbert and Peter Lohnes. We talked to Leggett about the show, his depressing dream roles and his fondness for Annapurna momos and Cal Anderson Park.

Victor’s arc through the play. The action of the play is continuous from beginning to end—there are no scene breaks, no lumps of time between scenes to account for. While the two-plus hours of the play’s action are obviously difficult ones for Victor—and of course the distant past looms very large—it’s simply a matter of stepping onto the stage and being swept up into it. It’s very clean that way.

What’s your favorite thing about the show?

The economy and effectiveness with which Arthur Miller presents what is a very complex set of relationships and family dynamics.

Hard to say. Among the best would have to be Shylock and Sir Toby Belch, but I also had a grand time playing Ray in Steven Dietz’s Yankee Tavern here at ACT, while some of the most pure FUN I’ve had onstage was taking on an assortment of roles in J.P. Donleavy’s Fairy Tales of New York—a mortician, the CEO of a spark plug manufacturing company, a hard-drinking denizen of an athletic club boxing ring (simply called “The Admiral”), and an unctuous Eastern European waiter, among others.

What’s your dream role, realistic or not?

I’ve always sort of had my eye on Reverend Shannon in The Night of the Iguana; there’s also a fellow named Charlie in a beautiful play by Samuel Hunter called The Whale, a 650-pound English teacher who hasn’t left his apartment in months and is dying of congestive heart failure. Nothing especially cheerful, it appears.

What actor would you love to work with, realistic or not?

There are very, very few actors here in Seattle I wouldn’t like to work with. In the larger world, well, I have always been inordinately fond of Peter O’Toole. That’s now about as unrealistic as it gets.

Toulouse Petit is certainly a favorite. Lots of good pho around, too. Annapurna, on Capitol Hill, for the momos.

What’s your favorite park in Seattle?

Cal Anderson. I’ve lived on Capitol Hill several different times over the years, and that park has always been a fond presence.

What’s your favorite place to see theater in Seattle?