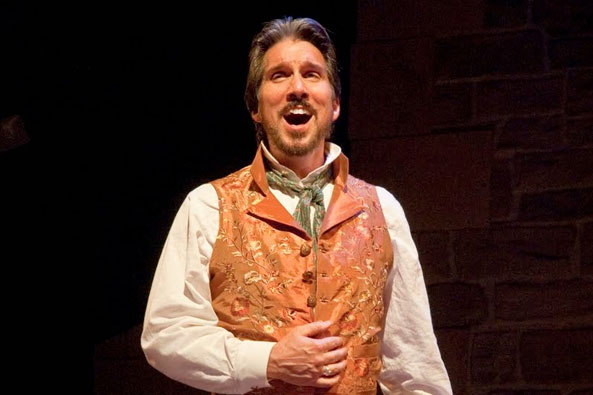 First published in 1847, Charlotte Brontë’s Jane Eyre is the story of Jane, an orphaned girl living with a family that dislikes her. She grows in strength, excels at school, becomes a gonverness and falls in love with the mysterious Edward Rochester. Deceived by him, Jane Eyre soon discovers something within her self—an inner-strength—and becomes a strong, independent woman. Taproot Theatre brings that story to the stage, as a musical, with Jessica Spencer playing Jane Eyre and Art Anderson playing the role of Rochester.

Encore recently sat down with Anderson to discuss the complexity of his character, what music brings to the story, and the genius of Charlotte Brontë.

The character of Rochester is complex and loaded with contradictions. His goals and intensions are clear and focused to get the girl, though his methods of achieving them are less than thoughtful. As an actor, the challenges here are intoxicating which says nothing of the pure joy of singing this incredible score.

How did you get involved in this particular show?

When I heard Taproot was going to produce Jane Eyre, the Musical, I felt drawn to the possibility of auditioning. I was not very much aware of the staged musical but the character of Rochester is iconic in English literature and I knew it would be a role worth pursuing. The open call for the role was at a time when I was out of town and I was crushed that I could not be considered. After jumping through some hoops and shameless, pleading correspondence, I was able to persuade the Production Stage Manager and Director for consideration after the fact. I was later notified that they would hold up casting the role until I was back in town to audition in person. I was and am still very grateful for the risk that the production staff took in holding off and casting me.

Jane Eyre is a classic. Why add singing? What does it add to the story?

I say, why not? Composer Paul Gordon has written this sweeping and incredible score to this timeless tale. It should be heard and appreciated. The significant story themes continue to resonate long after the production is over… To add musical nuance and emotion only enriches the experience of the book, especially if done well, as I feel we have achieved.

What will be surprising about your production to those who have read the book?

For those that know the Bronte novel and the journey of literature’s first real female heroine, will appreciate that the play keeps, for the most part, the descriptive and passionate first-person voice of Jane Eyre throughout the play. Through the use of a most excellent and diverse ensemble cast, the playwright and director are able to keep the essence of this storytelling through a Greek chorus, if you will, as well as Jane’s own narrative. The one thing that struck me most of Charlotte Bronte’s novel is her mastery of an amazingly descriptive and beautiful narrative. This is not lost in the writing of this play. It’s very loyal to the novel within the limited time constraints.

As the old adage dictates, the role you are in at present is always your favorite. The role of Rochester has opened my eyes, with the help of some careful direction from Karen Lund, to an array of choices and risks worth taking. I look at favorite roles from which I grow as an actor and the personal relationships I experience during the rehearsal process and performance. My experience here with this production has easily risen to ‘favorite’ status, also because it’s just so much fun.

Seattle is a hub of amazing talent and the list of actors with whom I’d like to work is long. One local actor, in particular comes to mind, my husband, Nick DeSantis. He is an amazing actor and I’m sure I’d get a kick out of the experience if we could ever arrange the same working schedule. It is how we met, after all, eleven years ago.

There is no specific venue I enjoy more than any other. I love how each venue succeeds in transporting me to different worlds in their own unique way.