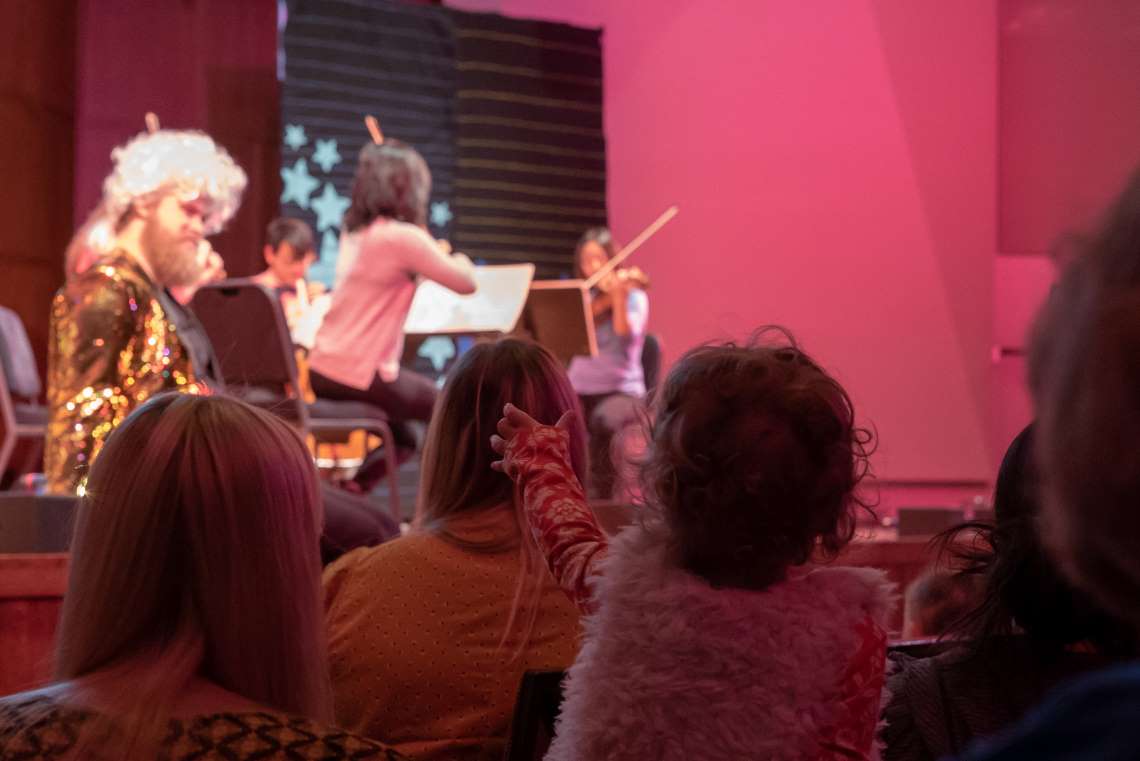 When John Turman moved to Seattle in 2015, hosting the Tiny Tots concert series was the furthest thing from his mind. He’d just graduated from Rice University and, after deciding to turn down a principal horn position at the St. Paul Chamber Orchestra, joined the horn section at the Seattle Symphony.

Now entering his fifth season with the Symphony and his second season as the Tiny Tots concert series host, this Austin native is happy to now call Seattle home. “There’s just an action and activism that I feel here in Seattle,” Turman said. “And politically, it’s amazing. I hear more voices here than anywhere else.”

I had the pleasure of speaking with Turman just before the start of the 2019-20 Seattle Symphony season about his role as a host, and how that role has deepened his understanding of early childhood education.

Danielle Mohlman: The Tiny Tots concerts are geared toward children ages zero to five, a demographic typically left out of symphony performances. How did you become involved in this concert series as a host? What drew you into this age group?

John Turman: When Amy Heald, our associate director of collaborative learning, joined the Seattle Symphony a couple of years ago, she said “Let’s bring some of these Symphony musicians onstage for these kids.” It was an age we were kind of missing out on. Because they absolutely can understand and have fun and recognize the musicians. And we really wanted to change things up with our Tiny Tots programming, so we kind of scrapped the entire thing and started from the ground up. And we started writing our own scripts. Our main thing is it’s all based on really great music. We wanted to program some pieces with substantial weight in the classical cannon—because there are so many pieces that not only the kids can enjoy, but the parents as well.

And just knowing that learning classical music early on helps with complex processing later in life. And not pandering and saying that this is “children’s music.” Because all music can be children’s music.

Exactly. It’s this cognitive development cycle that Amy [Heald] educated me about when she brought me on to host. Danielle Kuhlmann was the first host of this structure of Tiny Tots that we’re using right now. We had a woodwind quintet play a show and then Danielle read a book to go along with this composition. And then the next year, Amy approached me and asked if I wanted to host. And I said yes, of course.

I love music education and I come from a background, you know, Texas high school—really solid music educators. I’ve known a lot of great educators throughout my life and I’m very grateful and privileged to have had that. And so I’m really excited to give that back in this way. I’m still performing and people know that I play in the Symphony and that’s part of the fun. I’m like the friend who says, “Here’s what things are really like in the Symphony.” And these kids are all zero to five and I’m like, “You guys belong here just as much as the adults do.”

So Amy and I started brainstorming. It was her idea to do standard chamber music pieces, so we have a woodwind quintet for one show, a brass quintet for another, a percussion trio and a string quartet. And the final concert is a big chamber orchestra.

Bringing it all together.

Yeah, exactly. So now we have this whole program where the kids will see every instrument represented on stage throughout the Tiny Tots series. Which is so much different than what we were doing before. And we’re so excited because people really do enjoy that. They enjoy taking their kids to see a show for thirty minutes and they enjoy the programming. And I hope they enjoy the characters that we get introduced to. I’m usually always wearing some type of sequined garment—something that’s visually appealing. Stimuli is a big thing in their life right now. Sequins are golden. Sequins are the key here.

Switching gears a little bit: when did you first discover your passion for music. Do you remember how old you were?

I do. I remember the exact moment. It was when my Grandpa Tom took me into the music store in Austin, Texas and bought me a three-quarter size classical guitar. I was seven. And I thought, “Oh yeah, I’m Stevie Ray Vaughan over here.” And then he bought me a guitar book. And it was just when I was learning how to read, so I learned how to tune the guitar myself, and I learned how to read the first three lines of the treble clef. That moment of getting that guitar and making sound on my own for the first time was something that really, really drove home that I wanted to do this. I wanted to learn this. And both my parents were in the Longhorn Band [at the University of Texas, Austin] that’s how they met.

Yeah. And then band started for me in sixth grade. And at the instrument petting zoo, the shortest line was for the French horn. And I thought it was really cool. And my Aunt Betty Lou said, “You know, John, this is the most challenging instrument in the orchestra.” And I said, “Oh I can’t back down from a challenge.” And I had some incredible music educators. My band director got me a CD of the Canadian Brass and The Planets.

Oh, I love The Planets.

Right? It just kind of triggered my hunger. It really just activated the nerd inside. I loved organizing chamber music ensembles with my friends. And then I was drum major in high school and I loved being that kind of role model for band kids. And, you know, being in band is hard. Being in high school is hard. And I was happy to be a friend and mentor to a lot of people through that.

The Tiny Tots concert series at the Seattle Symphony begins on October 4 and 5 with The Percussion: 5, 6, Pick Up Sticks and continuing on with The Brass: March of the Toys on December 6 and 7. A full schedule and tickets for this season’s Tiny Tots concerts can be found online.