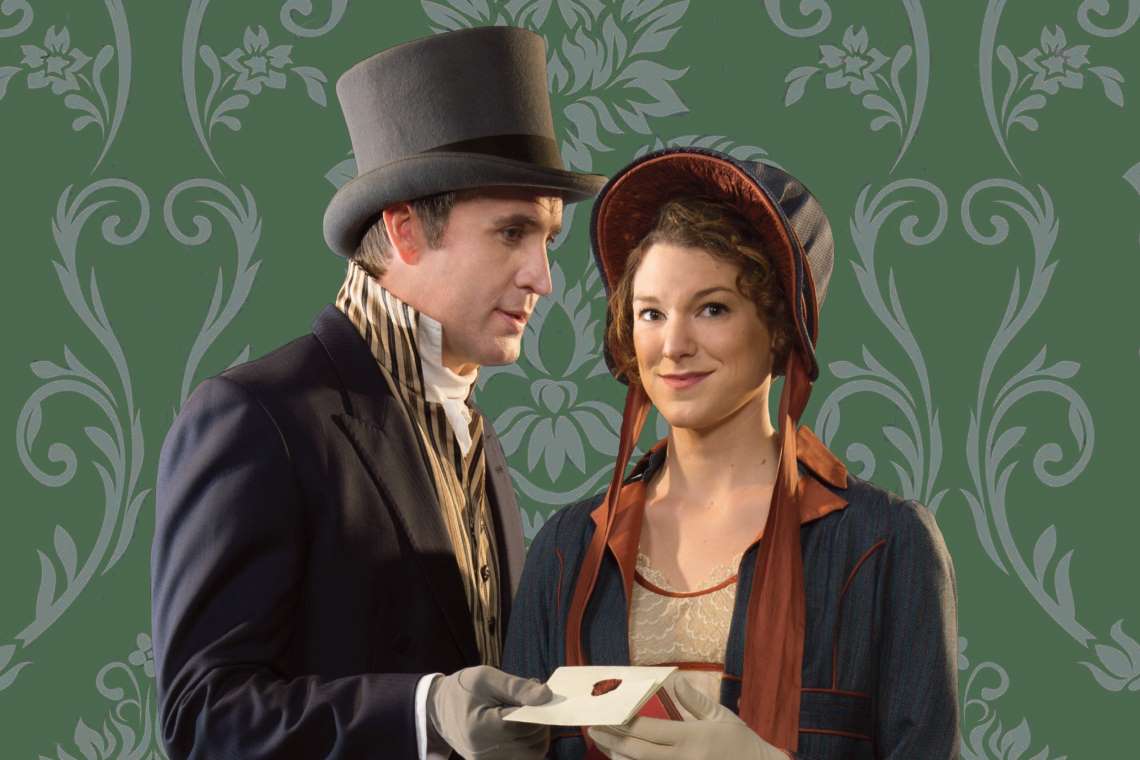 The stellar cast features many TheatreWorks Silicon Valley veterans, as well as many actors who originated the roles in the 2018 TheatreWorks New Works Festival, where this musical was first work-shopped.

Pride and Prejudice will play December 4,2019 through January 4, 2020 at TheatreWorks Lucie Stern Theatre in Palo Alto.

Mary Mattison (Lizzie Bennet) Mattison has been seen onstage at the Northern Carolina Theatre and Theatre Raleigh, and in readings of Clueless, The Musical and Superhero at The Eugene O’Neill Theatre Center. Her television credits include CBS’s Blue Bloods.

Justin Mortelliti (Mr. Darcy) Mortelliti was seen on Broadway in Escape to Margaritaville and Off-Broadway in The New Group’s Clueless, The Musical and The Columbine Project, for which he received an Artistic Director’s Achievement Award for Best Lead Actor in a Drama. His regional credits include starring in the original Las Vegas cast of Rock of Ages and performing at regional theatres including La Jolla Playhouse and The Wallis Annenberg Center. His film and TV work includes Netflix’s Orange is the New Black, CBS’s Numb3rs, AMC’s TURN: Washington’s Spies and Nickelodeon’s Victorious, in addition to performing as the musical guest for CBS’s The Queen Latifah Show.

Sharon Rietkerk (Jane) Originating the role of Jane Bennet in the 2018 TheatreWorks New Works Festival, Sharon Rietkerk returns to TheatreWorks where she won San Francisco Bay Area Critics Circle (SFBATCC) Award for her performance in Triangle, a Theatre Bay Area (TBA) award for Marry Me a Little, received a SFBATCC Award nomination for her performance in The Secret Garden, and was also seen in Cyrano, Little Women and the 2015 production of Jane Austen’s Emma. Other awards include a TBA Award for Born Yesterday at Center REPertory Company. Rietkerk has also performed onstage at Old Globe Theater, San Jose Repertory Theatre, 42nd Street Moon and American Conservatory Theater, in concerts with the San Francisco Symphony and Chicago Cubs, and was seen in Streaming Musical’s filmed theatrical production of Emma.

Melissa WolfKlain (Mary) Originating the role of Mary Bennet in the 2018 TheatreWorks New Works Festival, Melissa WolfKlain returns to TheatreWorks Silicon Valley where she was nominated for a SFBATCC Award for her performance in the World Premiere of Tinyard Hill and was seen in TheatreWorks New Works Festival workshops of Caraboo and Asphalt Beach. Receiving a 2019 TBA Award nomination for Dames at Sea at 42nd Street Moon, she also won SFBATCC Awards for her performances in Broadway by the Bay’s Singin’ in the Rain and Crazy for You. Seen in the national tours of White Christmas and 42nd Street, WolfKlain has also performed at regional theatres including San Francisco Playhouse, Hillbarn Theatre and Arizona Repertory Theatre, and her film and TV credits include FOX TV’s America’s Most Wanted and Lifetime’s The Truth about Jane.

Heather Orth (Mrs. Bennet) Originating the role in the 2018 TheatreWorks New Works Festival, Heather Orth makes her TheatreWorks mainstage debut as Mrs. Bennet, the matriarch of the Bennet family. Receiving 2019 TBA Award nominations for her performances in Sweeney Todd at Hillbarn Theatre, Passion at Custom Made Theatre Company, and Sister Act at Broadway by the Bay, Orth has won TBA Awards for her performances in Sister Act at Berkeley Playhouse and The Boys from Syracuse at 42nd Street Moon. Orth has won SFBATCC Awards for her performances in Jesus Christ Superstar at Ray of Light Theatre and The Secret Garden at 42nd Street Moon, as well as for Chess and Grey Gardens at Custom Made Theatre Company. Orth has also performed at Feinstein’s at the Nikko and with Symphony Silicon Valley.

Taylor Crousore (Mr. Wickham) Making his TheatreWorks Silicon Valley debut, Taylor Crousore plays Mr. Wickham, a handsome soldier who catches the eye of the Bennet sisters. Crousore’s Off-Broadway credits include A Musical About Star Wars, NEWSical the Musical and Forbidden Broadway. He has also performed in The Public Theater’s Under the Radar Festival and at Carnegie Hall and trained with the Upright Citizens Brigade.

Dani Marcus (Charlotte Lucas) Originating the role in the 2018 TheatreWorks Festival, Dani Marcus returns to TheatreWorks Silicon Valley as Charlotte Lucas, a friend of Lizzie Bennet. Playing Harriet Smith in TheatreWorks Silicon Valley’s 2007 World Premiere production of Jane Austen’s Emma, Marcus reprised the role in productions of the musical across the country at The Old Globe, Cincinnati Playhouse in the Park, Repertory Theatre of St. Louis, and in Streaming Musical’s filmed theatrical production. Marcus was seen in the national tour of A Gentleman’s Guide to Love and Murder and her New York theatre credits include performances at National Yiddish Theatre and New York Musical Festival. Marcus won a SFBATCC Award for her performance in Beggar’s Holiday at Marin Theatre Company and appeared in TheatreWorks Silicon Valley’s 2003 production of A Little Night Music. She has also performed at regional theatres including San Jose Repertory Theatre, Center REPertory Company and Broadway by the Bay. Marcus was seen in FX Network’s Lucky and her voice can be heard in Pokémon: The Dragon Master’s Path and Pokémon: Keeping in Top Forme.

Sean Fenton (ensemble) Rounding out the ensemble is Sean Fenton, who returns to TheatreWorks Silicon Valley where he was seen in the World Premiere of The Four Immigrants: An American Musical Manga and the 2003 production of A Little Night Music. Receiving a 2014 TBA Award for his performance in Where the Mountain Meets the Moon at Bay Area Children’s Theatre, Fenton has also performed at Custom Made Theatre Company, Broadway by the Bay, and Foothill Music Theatre.

Tickets for Pride & Prejudice are now available online or by calling the box office at 650.463.1960.