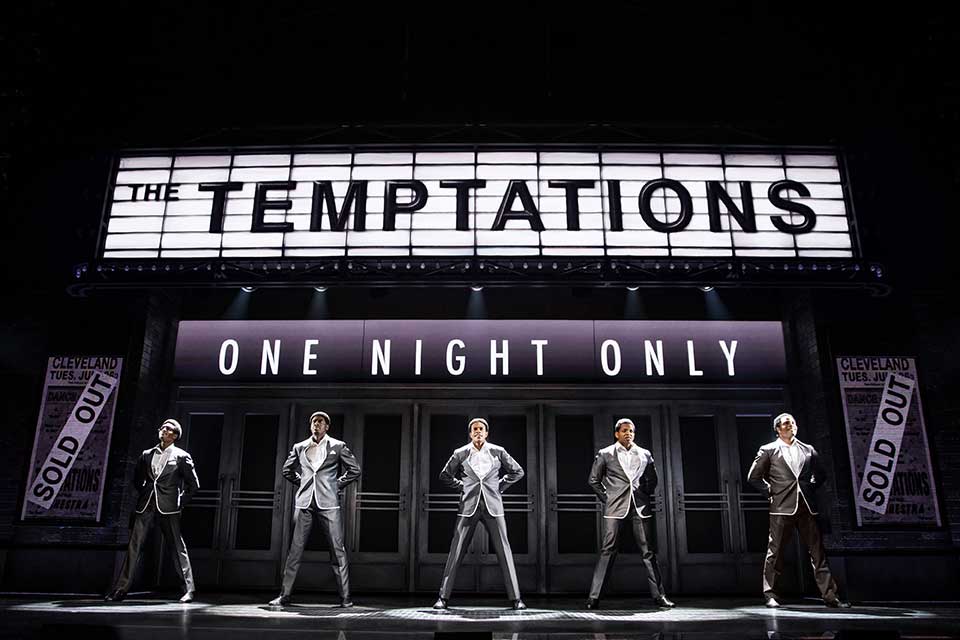 Cast of 'Ain't Too Proud.' Photo by Matthew Murphy

Broadway at The Paramount announces their 2020-21 season. Among the eight shows stopping in Seattle on their Broadway National tours is a fair balance of familiar favorites and new delights.

Kicking off the 2020-21 season will be Seattle’s first taste of the 2018 Tony Award Winner for Best Musical, The Band’s Visit. Next is the season package option: Blue Man Group. And just in time for the holidays is the stage version of Irving Berlin’s White Christmas. On its first National tour, the Tony Award Winner for Best Choreography, Ain’t Too Proud,will arrive in January, followed by a short run of the classic My Fair Lady. In celebration of its 50th anniversary, a new production of Jesus Christ Superstar comes through Seattle in April and back by popular demand, next spring will see the return of Hamilton for an extended six-week run. Finally, closing the season will be the new romantic comedy musical sensation, Pretty Woman: The Musical.

The critically acclaimed smash-hit Broadway musical The Band’s Visit is the winner of 10 Tony Awards®, including Best Musical, making it one of the most Tony-winning musicals in history.  It is also a Grammy Award® winner for Best Musical Theater Album.

In this joyously offbeat story, set in a town that’s way off the beaten path, a band of musicians arrive lost, out of the blue.  Under the spell of the desert sky, and with beautiful music perfuming the air, the band brings the town to life in unexpected and tantalizing ways.  Even the briefest visit can stay with you forever.

The cast of world-class performers is led by award-winning Israeli actor Sasson Gabay, star of the original film and the Broadway production. With a Tony- and Grammy-winning score that seduces your soul and sweeps you off your feet, and featuring thrillingly talented onstage musicians, The Band’s Visit rejoices in the way music makes us laugh, makes us cry, and ultimately, brings us together.

More than 35 million people around the world have experienced the smash hit phenomenon that is Blue Man Group. Blue Man Group returns to Seattle for a limited engagement on their new North American tour. It’s everything you know and love about Blue Man Group—signature drumming, colorful moments of creativity and quirky comedy—the men are still blue but the rest is all new! Featuring pulsing, original music, custom-made instruments, surprise audience interaction and hilarious absurdity, join the Blue Men in a joyful experience that unites audiences of all ages.

This holiday season discover the perfect gift for everyone on your list!  Start with a timeless tale of joy and goodwill, fill it with classic Irving Berlin songs, top it off with glorious dancing and lots of snow and head on over to the Paramount Theatre to see Irving Berlin’s White Christmas. Performances begin December 8 for this must-see classic in a lavish new production that The New York Times says to “put on your wish list. Irving Berlin’s White Christmas tells the story of a song-and-dance team putting on a show in a magical Vermont inn and falling for a stunning sister act in the process. Full of dancing, laughter and some of the greatest songs ever written! Give everyone the gift they’re dreaming of with this merry and bright holiday musical.

Ain’t Too Proud is the electrifying, new smash-hit Broadway musical that follows The Temptations’ extraordinary journey from the streets of Detroit to the Rock & Roll Hall of Fame. With their signature dance moves and silky-smooth harmonies, they rose to the top of the charts creating an amazing 42 Top Ten Hits with 14 reaching number one.

Nominated for 12 Tony Awards®, Ain’t Too Proud tells the thrilling story of brotherhood, family, loyalty, and betrayal, as the group’s personal and political conflicts threatened to tear them apart during a decade of civil unrest in America.

The unforgettable story of this legendary quintet is set to the beat of the group’s treasured hits, including “My Girl,” “Just My Imagination,” “Get Ready,” “Papa Was a Rolling Stone” and so many more.

From Lincoln Center Theater that brought you The King & I and South Pacific, comes “a sumptuous new production of the most perfect musical of all time” (Entertainment Weekly), Lerner & Loewe’s My Fair Lady. Director Bartlett Sher’s glowing production is “thrilling, glorious and better than it ever was” (New York Times).  “Every so often a revival comes along that reminds you how indispensable great theater can be” (NY1).

Boasting such classic songs as “I Could Have Danced All Night,” “The Rain in Spain,” “Wouldn’t It Be Loverly” and “On the Street Where You Live,” My Fair Lady tells the story of Eliza Doolittle, a young Cockney flower seller, and Henry Higgins, a linguistics professor who is determined to transform her into his idea of a “proper lady.”  But who is really being transformed?

Jesus Christ Superstar is an iconic musical phenomenon with a world-wide fan base. In celebration of its 50th anniversary, a new mesmerizing production comes to North America. Originally staged by London’s Regent’s Park Open Air Theatre and helmed by the acclaimed director Timothy Sheader (Crazy for You, Into the Woods) and award-winning choreographer Drew McOnie (King Kong, Strictly Ballroom), this production won the 2017 Olivier Award® for Best Musical Revival garnering unprecedented reviews and accolades. Appealing to both theatre audiences and concert music fans, this production pays tribute to the historic 1971 Billboard Album of the Year while creating a modern, theatrical world that is uniquely fresh and inspiring.

Featuring award-winning music by Andrew Lloyd Webber and lyrics by Tim Rice, Jesus Christ Superstar is set against the backdrop of an extraordinary series of events during the final weeks in the life of Jesus Christ as seen through the eyes of Judas. Reflecting the rock roots that defined a generation, the legendary score includes “I Don’t Know How to Love Him,” “Gethsemane” and “Superstar.”

Hamilton is the story of America then, told by America now.  Featuring a score that blends hip-hop, jazz, R&B and Broadway, Hamilton has taken the story of American founding father Alexander Hamilton and created a revolutionary moment in theatre—a musical that has had a profound impact on culture, politics, and education.

With book, music, and lyrics by Lin-Manuel Miranda, direction by Thomas Kail, choreography by Andy Blankenbuehler, and musical supervision and orchestrations by Alex Lacamoire, Hamilton is based on Ron Chernow’s acclaimed biography. It has won Tony®, Grammy®, and Olivier Awards, the Pulitzer Prize for Drama, and an unprecedented special citation from the Kennedy Center Honors.

After an incredible run on Broadway, Audience Choice Award-winner Pretty Woman: The Musical is coming to Seattle! One of Hollywood’s most beloved stories of all time, Pretty Woman: The Musical is brought to life by a powerhouse creative team representing the best of music, Hollywood, and Broadway. Featuring direction and choreography by two-time Tony Award® winner Jerry Mitchell (Hairspray, Kinky Boots, Legally Blonde), an original score by Grammy® winner Bryan Adams and Jim Vallance (“Summer of ’69,” “Heaven”), and a book by the movie’s legendary director Garry Marshall and screenwriter J.F. Lawton, Pretty Woman: The Musical will lift your spirits and light up your heart. “If you love the movie, you’ll love the musical!” (BuzzFeed News).

Featured in the musical is Roy Orbison and Bill Dee’s international smash hit song “Oh, Pretty Woman,” which inspired one of the most beloved romantic comedy films of all time. Pretty Woman the film was an international smash hit when it was released in 1990. Now, 30 years later, Pretty Woman: The Musical still “Dazzles!” (Deadline) and is “Big romance and big fun!” (Broadway.com). “Irresistible! A romantic fantasy. A contemporary fairy tale,” says The Hollywood Reporter. Pretty Woman: The Musical delivers on all the iconic moments you remember. Get ready to experience this dazzling theatrical take on a love story for the ages.

Subscriptions for Broadway at The Paramount’s 2020-21 season will become available on their website at a later date.