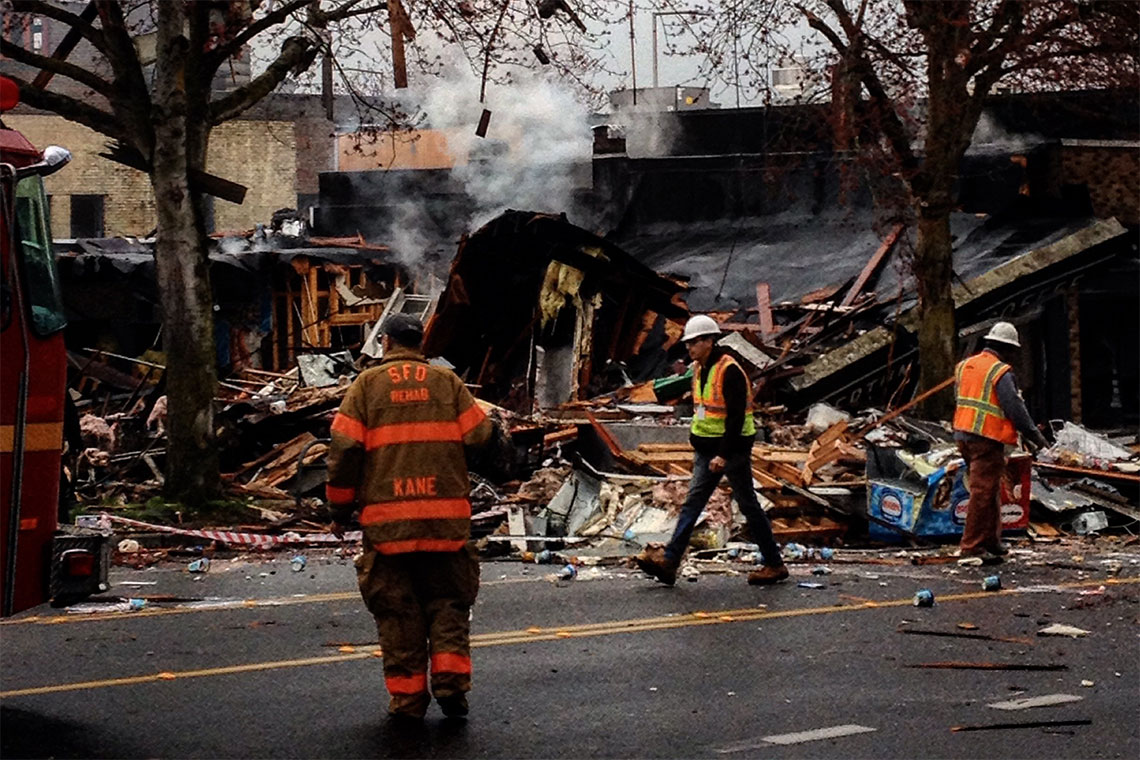 Two weeks ago in the early hours of the morning, a massive explosion caused by a gas leak leveled a building in the center of Greenwood’s commercial district. Three businesses were reduced to rubble—Mr. Gyros, Quick Stop Grocery and Neptune Coffee—and the blast shattered windows as far as two blocks away. Our own Encore HQ, located just around the corner on 85th and Dayton, was mercifully spared, but many of our neighbors in the immediate vicinity were affected.

This wasn’t the first conflagration witnessed by the folks at Taproot Theatre, located in the heart of the business district at 85th and Greenwood. Back in 2009 a serial arsonist lit a blaze that caused about $3 million worth of damages to their property. They came roaring back in 2013 with the new, LEED Silver-certified Kendall Center, housing a 120-seat black box theatre, café, lobby and other updated facilities.

This year Taproot celebrates their 40th anniversary as well as their 20th year as a resident of Greenwood. I talked to producing artistic director and CEO Scott Nolte about weathering both fires.

When you heard the news about the explosion did it give you flashbacks?

It was sort of a punch to the gut. I got a text message from Mark Lund, our production director, at three in the morning saying that there’d been a gas explosion. When I talked to him later he said it was déjà vu driving south on Greenwood and in the distance you see fire truck lights and police lights and commotion of all kinds—destruction, terrible things. He thought he was coming for a burglar alarm problem in our building, same as in 2009.

It was shocking to see the way those buildings were leveled.

In the 2009 arson, the guy set eleven fires that damaged 15 buildings and one residence, but it was over the course of four months so there was a significant amount of damage dispersed around Greenwood over the course of months. In the explosion, it happened in one day. Three businesses are evaporated and upwards of 50 businesses have damage in some form, 13 residents have been displaced and I don’t know how many homes had windows blown out. Since most of the businesses in Greenwood are owner-operated places, the level of destruction to individuals’ lives is so alarming and so sad.

In the wake of this and the 2009 arson, do you have any insight into the role a theatre plays in the life of a neighborhood?

I think we’re trying to continue figuring out how we’re a crossroads for our immediate neighborhood. Some of that is with the café, some with the Isaac Studio Theatre hosting everything from the School of Rock to the police department. To what degree are we a community center for all the different organizations and small businesses that need a space to interact and do public things?

On the economic side, over thirty-three to thirty-five thousand people attend mainstage plays over the course of a year and the lion’s share of those are not from the greater Greenwood community. So they’re coming in here and having lunch or dinner, going out for a drink afterwards, maybe doing some shopping. The ability for us to be an economic engine for the sake of the rest of the community is a very, very positive thing as well.

Why did you choose Greenwood?

My dad grew up a mile south of here, and I grew up a mile north of here. Back in the late ’80s we were looking around to try and find where in the world we could go, because we’d [already] been uprooted a few times. We looked at VFW halls, old grocery stores, empty churches, all kinds of things between West Seattle and Lake City and even farther north. Eventually we came back to this decrepit old theatre building. It had about 400 seats that didn’t match, a dirt floor basement, the roof leaked, it was really a mess, but we saw the potential of turning an eyesore into something much more positive.

When we opened 20 years ago, I think there were 15 empty storefronts within a block of us. We were making the point that we are gonna do plays in this building; it’s gonna put people on the sidewalk throughout the evening and that itself changes the climate of a neighborhood. When you have more citizens on the street and doing things, that’ll make these other empty storefronts attractive to cafés, shops or small bars to move in. We’ve been a part of the economic revival and the economic engine to continue to bring outside money into Greenwood.

You hear a lot more talk about that now, leveraging arts to bring back neighborhoods. It seems like you guys were ahead of the curve. Was that uncharted territory back then?

Yeah. We were sort of looked down upon, like, why aren’t we in the Seattle Center or the Capitol Hill core where everyone else is? We were out here in the hinterlands, and how in the world would anybody find us in North Seattle? You gotta get a passport and take a stage coach!

One thing I would add from our perspective—from 2009 and 2016—is that we felt the love of the neighborhood. [In 2009] other theatres offered us trucks and performance space and rehearsal space. Greenwood rallied in such an astounding way on behalf of all these businesses that lost so much, and it’s been terrific to give back.

We do have about $20,000 damage to our building, but it pales in comparison to three businesses that are leveled and all the other small shops that are trying to figure out how to replace $3000 to $5000 worth of windows.

Good on Greenwood to rally for each other! Over 100 people turned out on a rainy day to clean Greenwood Avenue a couple Saturdays ago. That says a lot about the strength of this neighborhood.