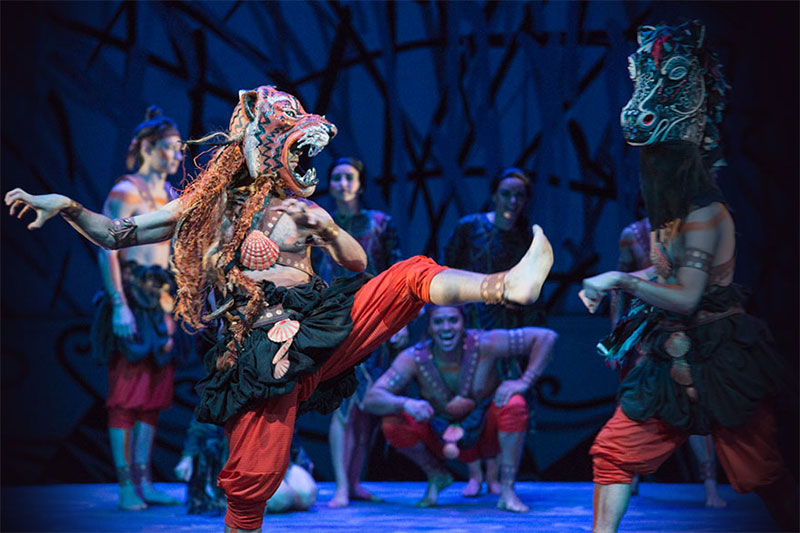 Bear with me when I say this because I actually mean it as a very high compliment: Seattle Opera’s The Pearl Fishers nearly put me to sleep. It’s a hypnotic swirl of colors and movement coupled with some truly gorgeous music by Georges Bizet. The problem here is that I’m genuinely becoming a fan of opera music. This was not always the case. Like a lot of people, I once found the singing to be a bit… much. But it turns out that opera is a lot like a fine scotch: it can be a totally entertaining and wonderful experience well before you learn how to truly appreciate it.

I’m not saying that six shows into this column I am now the Captain of All Opera Knowledge. That title belongs to Jonathan Dean. But I will say that nowadays I write while listening to Wagner and go to sleep listening to Verdi. Music that once seemed strange and overpowering to me is now a lovely comforting thing to pipe into my brain when I’m trying to slip off into oblivion. And the music of Bizet is nothing if not lovely and comforting.

The Pearl Fishers’ gentle music, cozy atmosphere and sensuous colors were lulling me into a state of pure relaxation until the spectacular conclusion of the second act, when it erupts in an intense flurry of thunder and damnation. It’s a classic bait-and-switch (rope-a-dope?) that leaves you stunned and breathless. As always with Seattle Opera, every aspect of the production is top notch. The set designs reminded me of Matisse, the striking costumes were rife with crazy hats that I was always afraid were going to fall off the dancers, and there was a climactic gunshot that scared the living hell out of me.

Fortunately, at my side as usual was the brave and knowledgeable Evelyn Troughten, an opera booster whom I once called “Gram Gram,” but I now call…well, that’s still what I call her. As is our tradition, we spoke before, during and after the show, and I learned stuff.

GRAM GRAM: Do you know what else Bizet wrote?

Oh! That’s the first Opera I ever saw!

I know! But have you ever seen any other operas, besides Carmen?

Well, actually, this is the sixth Opera that we’ve gone to together…

Besides that, I mean! Any other Operas by Bizet?

No, it was just Carmen 20 years ago with mom and then the ones that we’ve seen.

The interesting fact I wanted to tell you is this: Pearl Fishers and Carmen are the only operas that Bizet wrote.

Yes. He died young, so he only wrote the two operas, but they both have wonderful music. I remember when your mother took you and your brother to see Carmen and afterwards she said, “I didn’t know all of that music came from Carmen!”

All of the famous music ever comes from Carmen. I remember recognizing half the music from it, and that’s when I was a little kid.

You were a teenager.

But Pearl Fishers is very different from Carmen.

But is the music still pretty good?

During intermission (after acts I and II)

What do you think so far?

Well, first of all, I have to say–If you’re in an opera, there’s no better way to ensure that two people sleep with each other than by telling them that if they do, everyone’s going to die.

[Laughs] And then they do it anyway, of course! Well, that’s men for you. What did you think of the depiction of Sri Lanka, it was called Ceylon back then, and the culture?

I have to say I really doubt that people in Sri Lanka were ever like this.

Right, exactly! You know, the composer, Bizet, and the man who wrote the libretto, they never went to Ceylon! They wrote this whole story that takes place there, but they didn’t really know anything about the place.

And isn’t most opera fantastic, in that it’s not real? It’s like sci-fi today.

That’s a really apt comparison, because I think they took it about that seriously. They saw depicting a culture in a faraway land like we would see creating a culture on a faraway planet. Sri Lanka might as well have been another planet to most people in France at that time.

Right! And I’ve heard people say that the story is “lame.” So what?

I don’t know. It’s a bare bones, forbidden love story type of thing, but it’s not really a problem because of the beautiful music.

That’s it! The music is just gorgeous! Maybe I’m different than other people, but I’ve always gone to opera for the music. I would say story might be the least important thing.

That second act ends in a CRAZY over the top opera thing. People are getting sentenced to death, dozens of people on the stage, there’s singing and dancing and lightning and thunder. Wow.

It all works together. The dancing was wonderful. You know that all French operas have to have dancing in them, right? The King of France or whoever it was that had the final say-so thought that ballet was the thing. So every opera had to have it. You won’t see it in other operas. You won’t see it in Wagner. The first time I saw this one I thought, “there’s an awful lot of dancing in this.” But the second time, I thought, “there’s REALLY a lot of dancing!” [Laughs] But the dancing is very acrobatic and athletic. And you know I love dancing. Well, not doing it, I can’t do that kind of dancing. But I like to watch it!

Is there anything you’d like to say as a preview for the final act?

Anything I say would be a spoiler!

Well, I’m glad you didn’t give me any spoilers, because that ending was a lot happier than I was expecting!

Who do you think was the hero?

I think it ended up being about Zurga’s arc. That’s what the story is really about—him getting over his jealousy and anger and doing the right thing.

Yes, exactly. Everything involved in it: here’s his best friend, and they both fall in love with the same woman, although they don’t know who she is, other than a priestess, and Nadir goes off and happens to find her… so then she shows up at the village and, of course, Zurga expects the worst and then he has his heart broken.  But it’s the faith of two friends in each other. And when one thinks he’s been cheated on, there’s hate and jealousy-

But he doesn’t succumb to it.

Well, he does, but then he has to realize that he’s an honorable man. Because he realizes that she once saved him when she was a child, so he turns around and lets her go, because in the end, he is a hero!

He sacrifices himself for both of them, which is a pretty far cry from how he is in the beginning of the act when he’s, you know, trying to rape her.

Right! Right! Because that’s his jealousy coming through there. There’s all these emotions between men who were childhood friends. And then there’s the man-woman type love as opposed to brotherly love. It’s really fascinating, when you think about it.

It is certainly the first opera we’ve seen where the main relationship is between two men, as opposed to a romantic relationship. Not that they didn’t get a bunch of romance in there, too.

Yes, they did. [Laughs] But as I said, I’ve heard it before that it’s a really lame plot! But I don’t think so.

Yeah, and there’s a lot of stuff about defying mob mentality, mob justice…

Right, the village was angry, they wanted to kill her. There’s some politics there; I mean, here’s a democratic society—I mean, as democratic as it could be, but they lost their democracy when they decided to go the route of being a posse! No trial, no court. But Zurga goes against their wishes in the end.

It’s interesting that we talked so much about how the plot is weak or whatever, and then we spent most of the time talking about the plot!

POSTSCRIPT: After I said goodbye to Grandma and left for home, I had the following text exchange with my mom:

Seattle Opera’s The Pearl Fishers runs from October 17th through the 31st at McCaw Hall.