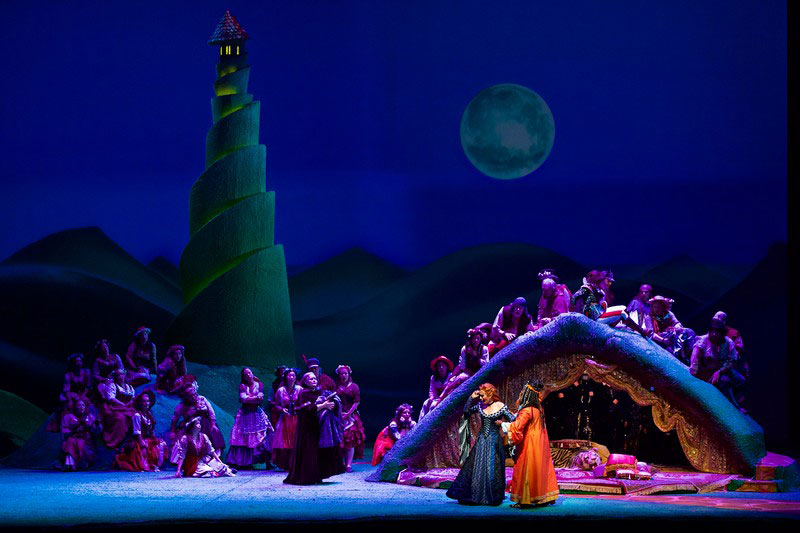 Quentin Tarantino coined the term “hang-out movie” to describe good-natured films that are in no particular hurry to get the plot in motion. The plot is actually rather superfluous to the real action—luxuriating in the company of the characters, watching them interact with one another and cohere as a unit. The term has two meanings: the characters are hanging out with each other, sure, but the most important aspect of this genre is that the viewer is hanging out with them as well.

The Wicked Adventures of Count Ory is a hang-out opera. It’s filled with fun characters—the drunken, amiably self-pitying Tutor (that’s his job, his name is not mentioned), amorous page Isolier, deceptively innocent Countess Adele and, of course, Count Ory himself, whose adventures often drift beyond the confines of gentle decency. There’s a lot to like about Count Ory. The sets are endearingly unrealistic—the opera seems to take place in a kind of cartoon wonderland; I was reminded of Adventure Time more than once. The music, by Gioachino Rossini, is absolutely gorgeous. The costumes are… well, there’s plenty more about that later.

What I enjoyed most of all was the show’s freewheeling buoyancy. The word that kept sticking in my brain throughout was breezy. I wonder if that’s why it’s such a rarely-produced opera. Do opera fans demand a certain amount of austerity in each show? Because Count Ory isn’t austere at all. I went to the show with Seattle’s foremost opera fan girl—the one known as Evelyn Troughton, AKA my beloved grandmother. She was just as enamored with the frivolity as I was, but she found the plot (or lack thereof) a bit tricky. You’ll get the general idea pretty much right off the bat in the following interview.

(PS: My good friend and frequent plus-one Sarah Coyle also participated in our discussion. She adds a few things during the interview. Oh, and also Seattle Opera dramaturge Jonathan Dean came by at one point. It was our own little hang-out movie!)

No! I’ve read about it and I knew it was funny. I did not get to see the dress rehearsals that I usually do, but things happen. So, I’ve heard that it was so funny and the sets were so different and I agree with them, it’s wonderful, it’s different it’s humorous, and I have an idea about what it is, but…

Well, you didn’t get to see the rehearsals a dozen times.

Jonathan Dean: So this is actually very exciting. An opera that your grandmother has never seen!

This is the first time that I’ve heard her say that.

What’s more, I’d never heard of it until they announced it! But I did get to go and find out a little bit about it, but what I read didn’t clarify it for me. [Laughs] But the sets are actually fabulous. Everything throughout is funny. It’s so clever and the costumes are wonderful and extravagant and stupid and…

Yeah, Count Ory is wearing these ridiculous leopard print boots. And then there was that… thing… that they all wore.

He had like a horn or a sheath or something in his crotch area.

Oh, right, THAT! [Laughs] He probably needed it to protect himself! Somebody was going to go after him and get him where it was really important. It’s just that, I’m so confused. It hits you with so much. It’s different.

[Count Ory] is on the lam in the way that only randy noblemen can be. The Countess is kind of heartsick for her brother, who’s off fighting in the crusades. And everyone wants to have sex with her, but she’s like “I could never,” so she cloisters herself off in the castle.

It brings me back to a story. A play that I saw, thirty some years ago, when I was single and dating. And he was a retired doctor and…

Is this going to be admissible in the interview?

Well, it’s what this reminds me of! You can wipe it out if you want.

We’ll see how good the story is.

Okay. He took me to this play that the UW drama class did. I can’t remember what play it was. But the men were off to the crusades and the women were so unhappy that they were gone so much that when they finally came home, unless they promised not to go again, they were not going to be welcome in the house for anything. So the men were all distraught…

That’s based on a Greek thing, isn’t it?

Yeah, it wasn’t the Crusades, it was a Greek play!

So it was the Greek one. That’s a classic.

Yes. And the costumes they had, all of the men’s extremities were greatly exaggerated and I was terribly embarrassed. It was rather blunt. But this reminds me of that. Here he is, Count Ory and he’s lusting after this woman and the other men are all gone.

Maybe he’s running from fighting in the Crusades, because he would seem to be of age, whereas his page is too young to go to war. That would explain why he’s a full-fledged man and he’s not in the war.

Grandma: Maybe you’re right! I’m coming again Wednesday night and maybe I’ll understand it more. But it doesn’t matter right now whether it makes sense to me; it’s just funny. It entertained me!

It is funny! It reminds me a lot of Pepe Le Pew. Do you know about him? From Looney Tunes?

And they’re both French, so it works out.

Yes! [Laughs]. I think this was before Pepe’s time.

Maybe Pepe comes from this, though, because he’s a lot more harmless than Don Giovanni, who kills at least one person. Count Ory is like a cartoon—always jumping into the bed and coming down from clouds. I think I saw Pepe Le Pew do that once.

You see, I don’t remember that. I would never have dreamed of sets like this. I know they’re doing a lot more with projections nowadays. Just like in the comics, the clouds were like thought bubbles when they projected the libretto above the singers.

I think they intended it that way, now that I think about it. But this is like attending an opera for the first time.

You are literally attending this opera for the first time!

I’m still not quite sure what’s going on.

I don’t think there’s much to it, really. But go on.

I think he’s home because he’s probably elderly, and he’s just sort of in charge of everything. When the soldiers come back he knows about it first.

If the Duke is Ory’s father, what does the Countess have to do with it?

I think she’s just from some separate family. The whole point of that character is that she’s available. She’s the only woman who isn’t married. She’s pining for her brother instead. So she’s fair game, romantically.

It’s so confusing in my mind about who belongs to whom. But it’s funny. [Laughs] And it’s really clever. The clouds, the sets, the way that they moved everything around. I wouldn’t call it minimalistic.

It felt to me like the set from a really sophisticated children’s play, because it was really simple but at the same time, huge and with lots of moving parts.

And the costumes—bizarre! To say the least! Bordering on gaudy. I don’t know how they come up with ideas to do all of this. I think that they all work together, the general director works with the director and the designers and they talk it all over. The scenery and costumes were built by Seattle Opera; this was a brand new production.

Those seamstresses down there are something.

Sarah: The boots. I just kept staring at those boots.

Grandma: I’ve been a super in an opera. Three times. It’s like being an extra in a movie. You don’t say a word; you’re just there. And the first time I went in, they measured me for a costume. All different measurements. And then they built the costume, and I went in for a fitting and it fit perfectly! Just from measurements! Those seamstresses are something else again! That boggled my mind, because you know I sew. But back to the opera. I just don’t know what to say about it, it’s just so absolutely… different.

I thought it was the lightest opera that I’ve seen. None of it was heavy. Ariadne auf Naxos was funny in the first half, less so in the second. Marriage of Figaro had those moments with the Countess where she was sad about her marriage, but there was nothing heavy about this one at all. It was pure fun. What did you think of the scene where everyone was getting drunk?

Hilarious. [Laughs] Hilarious. I’m gonna have to go home to my book, I’ve got a book about operas, and see what it says about it. This is definitely one of the operas that are seldom done, so I need to know more. This music was really nice. I was concentrating tonight so much on the action that I didn’t have a chance to listen to the music that much. So that’s what I’m gonna do when I go next Wednesday. I usually need a couple viewings, especially with something as different as this was.

So this was new for you for a whole lot of reasons.

Never heard of it. And it’s never been done in Seattle, and I’ve never been anywhere else to see it because nobody else has ever done it, to my knowledge. And not having seen a dress rehearsal to familiarize myself with it. It was kind of overwhelming. Opera is not like anything else. It’s opera.