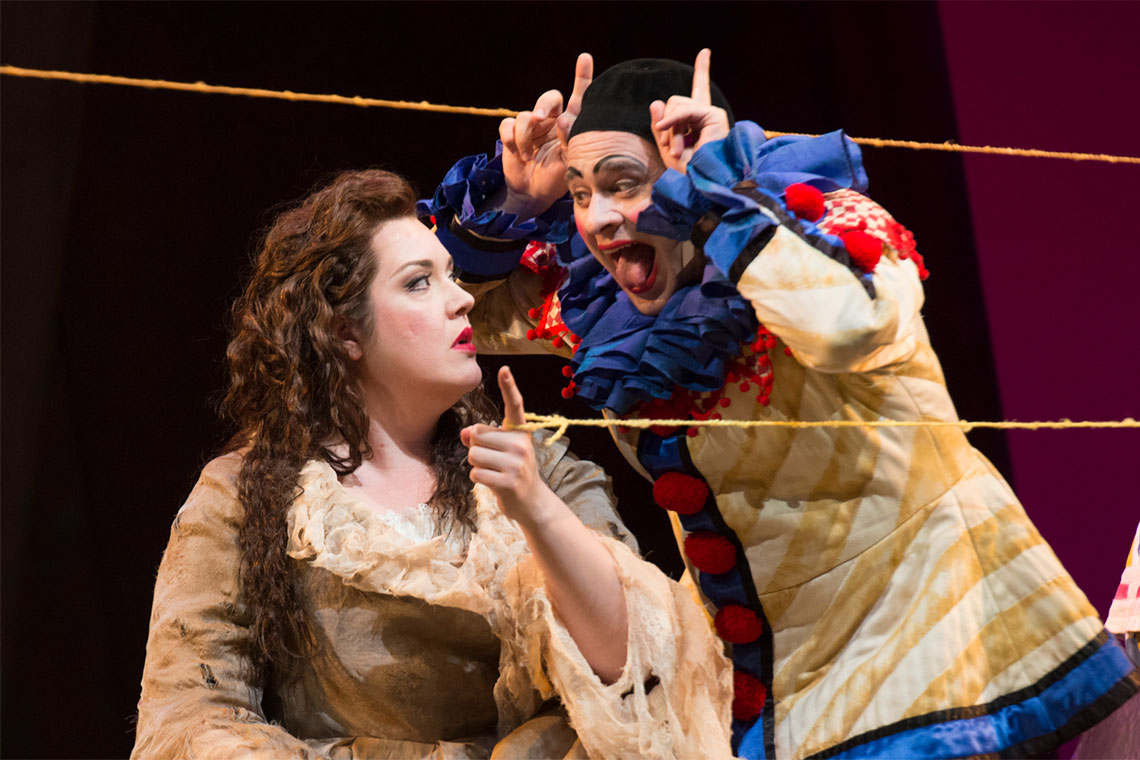 Another opera, another show unlike anything I’ve seen before. Richard Strauss’s Ariadne auf Naxos (running at Seattle Opera through May 16) could best be described as a Hollywood behind-the-scenes screwball comedy. But, you know, with opera. And written about five years after Hollywood was even invented. And German. But all of the familiar beats are there! There’s a frazzled, idealistic auteur struggling with compromise, there are temperamental actors, world-weary producers and clueless moneymen blithely pulling the strings.

The pace is reminiscent of Howard Hawks classics like His Girl Friday and Bringing Up Baby. Characters dart this way and that, popping off one-liners in every direction. (Just to be clear: they sing the one-liners. Beautifully.) The situation begins dire and winds its way up to hopeless, as the wealthy benefactors of a two-part show (opera in the first half, comedy in the second) decide that it would be a lark if both acts fused together. The artists have about fifteen minutes to figure out how to make this seemingly impossible compromise.

The resulting show within a show has to be seen to be believed: lovely, stately, traditional opera, routinely punctured with clowning and smutty songs. As always, Seattle Opera pulled together an insanely talented group of people onstage and off. I’m only four operas in so far, but I’m very much beginning to understand why Seattle is considered one of the country’s premiere opera destinations.

This one was a real treat, and along with me as always was the one and only Evelyn Troughton: music fanatic, Seattle Opera volunteer, and—not insignificantly—the mother of my mom. She was kind enough to share her thoughts with me before, in the middle of and after the show.

Thoughts before we head in?

Okay, this one is very different. As they all have been, from what you’ve seen. [Zero opera is what she means.] It’s a comedy. There’s this wealthy fella who wants to impress all of his friends and he hires some people to put on some shows. One’s an opera; one is a comedy. The first act sets it all up, but it’s short. The second act is quite long.

You know how I’m familiar with Strauss, right? Like most people, probably, it’s because of 2001: A Space Odyssey.

Oh, yeah? When I saw that movie, I was amazed. I’d never thought of the beautiful “Blue Danube” [Different Strauss, still a great scene] as traveling music! And that opening, I don’t know what they call it, but it’s wonderful, with the big booming drums. Wait, where are our seats? [Looking at the tickets] Section 2, row U…oh, we have to get going now.

Grandma and I chat while enjoying some snacks in the pressroom.

Are there a couple things you’d like to ask me about? Castrati? Trouser roles?

That’s not a woman playing the composer?

That’s a woman, yes! She’s in a trouser role!

That’s what that’s called? A trouser role? Is that the way this is usually done for this opera?

Yeah! Trouser role! Yes, it was written that way for this.

Oh, because… well, way, way, way, back when, women were not allowed on the stage. And so they had the castrati. And then that, of course, became illegal.

[Laughs] That’s what everybody says!

Just making sure we’re on the same page. But wasn’t that way before this was written?

[Leafing through the Encore program] Well, Jonathan Dean might discuss it in here. I guess I’m not entirely sure why.

At this exact moment, Jonathan Dean shows up at our table. Fantastic timing.

It’s quickly becoming my favorite, I think. This one is awesome.

Dean: I can’t pick a favorite. I want all of them!

Dean: I see, like, an Internet meme of Evelyn’s top-ten opera lists.

Grandma: What did he say?

Trust me, it’s never gonna make sense to you. [To Dean] We were just talking about the “trouser role.” Why was it written that way?

Grandma: I’m not as knowledgeable as he thinks I am. [Laughs]

Dean: Well, here it is: the man who wrote this just really liked women. He did a lot of this kind of thing, because for him it was just a lot easier to work with them. He liked writing for women, and he liked the scene where they were in love with each other. He kind of knew–with the tenors that were available to him in those days–that it would be a headache [to work with them].

And that’s based on the specific personalities of the tenors he knew at the time?

Dean: Yeah, the egos that go into the job and stuff like that. The character is also supposed to be a teenager. He’s like Mozart, a young kid. Think of the guy who played Mozart in Amadeus.

Dean: Yeah, he had this weird, high-pitched giggle and was really immature. That’s part of what goes into this character. So it’s easier for the mezzo-soprano to have that kind of impact. Certainly a bass or a tenor would’ve been totally wrong. Emotionally, he’s in a frenzied kind of state.

I knew this was a comedy going into it, but often times, like with A Midsummer Night’s Dream and such, I’m thinking, “Oh, this is what they considered a comedy back then,” but I’m not actually laughing. But this one is really funny.

Dean: That’s true—the humor in Ariadne is very contemporary. I also think it helps that we’re in Seattle and there are so many Seattle in-jokes. Like when we get to the next scene, it’s basically on Lake Washington in this guy’s mansion and he’s got Dale Chihuly pieces all over the place.

It’s a fantastic setup for a second act: “Here’s a crazy thing that shouldn’t exist! Here we go!” Cut to black.

Grandma: Then there’s a curtain call for everyone in the first act that you won’t see again. It’s two operas in one!

I guess since the composer character took a bow that means we’re not going to see him/her again. Which is sort of a tease, being that they set up the romance between him and the comedian lady.

For the record, a wry smile from grandma.

Grandma: [Laughs] You want a few grapes? You need some fruit in your diet.

I’m trying to collect my thoughts. That was pretty crazy.

It takes a while to get your head together after seeing something that is so full of… it’s just full! So many different things that are so different from what you’ve seen.

There’s a lot going on. Some times it’s straight up comedy, then there’s some real hardcore, serious opera, and then the comedy will come out and make fun of the opera for being so serious. But the last ten, 15 minutes of it was just pure power Opera.

Once Bacchus shows up, yes. They had a whole set of comic stuff. It was very long, and her aria about how she’s with one man after another and another, flirting with the diners. Pure comedy. What she was saying was… well… was she saying what she thought and felt? Or was it part of her act?

I don’t know! There are actors playing actors who are in and out of character. Layers upon layers.

And what I also thought was humorous was when the nymphs said that Bacchus the god was a young man, a boy.

Yeah, and he comes in, clearly a big burly man. The point is, was that part of the humor? Him not being a youth as they claimed him to be? Was that some kind of stage director’s humor? I have all these questions that I wonder about. So I’m going to have a lot of questions when I go in to volunteer on Monday.