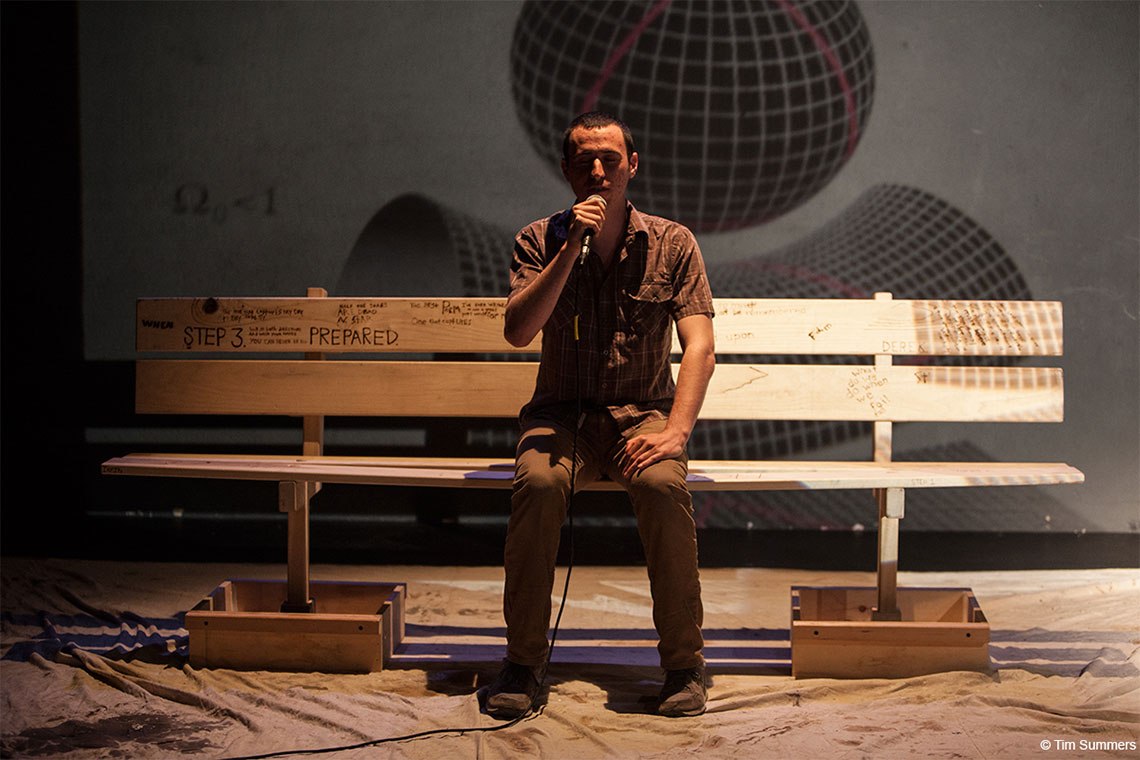 Tim Smith-Stewart is a Seattle-based theater artist who uses text as his primary medium for creating performances and installations. Most recently, a selection of his ongoing performance piece titled Awaiting Oblivion… premiered at the On The Boards’s Northwest New Works festival and the Risk/Reward Festival (PDX). Tim also directed The Eternal Glow Project, a four-part performance/installation that premiered at Seattle Center Next50, On the Boards Northwest New Works Festival 2013, and Lofi Arts Festival at Smoke Farm 2013.

Most recently, just a few days ago, I saw a tall bike jousting tournament at the after party of the Dead Baby Downhill. It was exhilarating. Sometimes I really love competitive violence, though I have mixed feelings about that. There was a kind of medieval bloodlust in the air. It felt dangerous, but not too dangerous. Mostly wonderful drunken absurdity. There was literally a double decker bike shooting fire over the audience at the beginning of every bout.

In the moment, I feel overwhelmed by the question. I don’t even know where to start. I’ve seen so much incredible performance this year.

Alice Gosti’s six-hour epic durational performance, How to become a partisan, was without a doubt one of the most profound performances I have ever had the privilege to experience.

The piece took place at St. Marks Cathedral and was produced by Velocity Dance Center. I fear I would do an injustice to the work to try and summarize this show. I was so affected by the work I wrote Alice a sprawling three page prose poem of an email in an attempt to capture my experience and share with her my gratitude. I’ll share an excerpt:

“herstory told through a common land
invisibilized partisan women
now shouting through bodies
but not a movement for the past, a movement catalyzed in the past and forever creeping/hurling forward”

Also, I have to say, one more: Now I’m Fine at On The Boards by Ahamefule J. Oluo. His musical talent plus his comedic talent is just unreal. But the heart of that piece was about the way in which art can help us be okay when everything is very much not okay. I was moved so deeply by that show.

I’ll stop there, or I’ll just keep writing about amazing performances I saw this year.

So many places. Though my favorite spot right now has got to be Ché Dessert Lounge by the Othello Light Rail Station. They have Vietnam Burgers that are as big as your face. They also have amazing slushies and Ché deserts. Beacon Ave Sandwiches. La Isla del Mojito in Hillman City has amazing Cuban sandwiches.

I’ve been listening to the Kairos EP, a solo project by Lena Simon, pretty much non-stop since it came out.

When I’m sad I listen to Grouper, an artist from Portland. The song “Living Room” captures a very specific kind of yearning, loneliness that speaks to me. Also, the new Hurray for the Riff Raffalbum has some heartbreaking songs that I’ve been listening to on repeat. Also Julianna Barwickis truly the sound of angels.

For me, the most important part of any production is vulnerability—some type of palpable risk for the performers on stage.

What’s the most important thing anyone’s ever taught you about working in theatre?

Five or six years ago, I was very lucky to be able to take a workshop from playwright Stephen Adly Guirgis. To paraphrase my recollection of his words: “I write about what keeps me up at night.”

The second piece of advice I remember are the same instructions one might give to a dog: “Sit.” “Stay.”

Meaning sit down and write. Then stay there and keep writing. Don’t stop.

I often come back to those two pieces of advice. They point to what draws me to creating performance. Attempting to capture the complexity of aliveness, in dialogue with others. The process of sitting with the fears, memories, questions that keep me up at night. And then continuing to sit with them. Coming back to those questions through creation. For me, performance allows for a poetic space to investigate questions impossible to answer.

Though the answer is impossible, performance demands a solution nonetheless. My collaborator Jeffrey Azevedo and I have an ongoing joke that it will take me at least 27 drafts of any piece of text before we feel satisfied with it. In reality it’s much more than 27. But the point is I need to write, we need to keep creating the next draft before we can create the next draft, before we can get to the 27th draft that might bring us closer to satisfaction.

We know the questions we’re creating from are impossible to answer but, again, performance demands a solution. So we present temporary solutions through a poetic space that allows for layered meanings as complex as the questions that keep us up at night. Because we have to or we won’t sleep very well. hahahaha