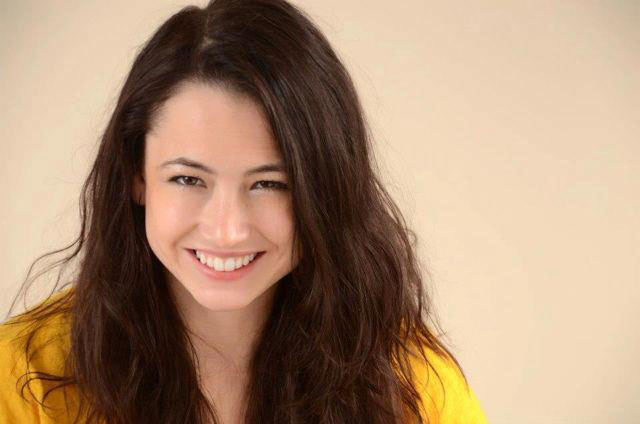 Every December for five years running, Delmar’s company Playing in Progress presents SnowGlobed, an evening of holiday-inspired scenes and spectacles. This year’s production is directed by previous 5 Fri Q-er Emily Penick with an all-female production team and new works by fellow Q-ers Pilar O’Connell and Kelleen Conway Blanchard, among others.

Next month Delmar is also directing For Christmas, a work that began its life in last year’s SnowGlobed and has since been developed into a full-length play. It’s an environmental experience that takes place in “Jesus Christ’s studio apartment,” i.e. the upstairs studio at West of Lenin.

In January, Delmar will be assistant-directing Titus Andronicus for Seattle Shakes and also reprising her role in the remount of Seattle Vice at the Triple Door. In the ramp-up to a hectic winter season, Delmar joined me for this week’s installment of Five Friday Questions.

I’ve seen two things in the last few weeks that aren’t only the best things I’ve seen recently but definitely qualify for my Super Favorites of All Time List.

First, Master of None. Aziz Ansari is on point in his writing and performance about so many important topics right now. The episode “Ladies & Gentlemen,” directed by Seattle’s own Lynn Shelton, opened with a scene that forevermore I will send men to watch instead of trying to explain what the difference between men and women really is.

I also had the fortune of FINALLY being able to see Sara Porkalob’s Dragon Lady. She is captivating as a writer, actor and storyteller. She creates a 56-minute world that I did not want to leave and that also made me want to go home immediately and call my grandma. She’s one of those actors that you see and go, “Oh. Yes. I need to work with them. As a director, actor—however.”

Tough. I have worked for several Tom Douglas restaurants so it would be very easy for me to pick Palace Kitchen or a full crab cracked and soaked in butter at Seatown but the place I keep going back to? Once a week minimum. Bol Pho. 64th & Roosevelt. They also have a $5 Bloody Mary on their happy hour that I dig. I judge most places based upon their Bloody Mary.

If I want to class it up, I’d say Pomerol in Fremont. SO glad it moved in next to West of Lenin because I can honestly recommend it to any of our patrons as one of my favorite meals in Seattle. Start with the oysters. Also, Rocky, their bartender, is the best.

I have a really solid playlist of ’90s punk rock, boy band and Disney songs that I use on a regular basis to keep me from falling into despair. There is something about having a song with a basic beat that you know all the words to that really makes my brainheart smile.

Blink 182 at the Gorge in eighth grade was my first concert. I almost died in the mosh pit. I’m not exaggerating. Over the course of the opening bands, my friend Noelle Cassidy and I made our way to the front of the pit, right in front of the stage. It was amazing. It was chill. We did a lot of swaying. What we didn’t realize was that everyone was saving their pent-up aggression to express during “Adam’s Song.”

Within minutes of Blink 182 coming on stage we were separated and shoved to the ground. I was literally being stepped on. I could not breathe and I prayed to whoever was listening, and I tried to stand back up and finally accepted that I was going to die at the age of 14 at my first concert when what I imagine in my mind’s eye was a giant picked me up like I was weightless and threw me on top of the crowd and I crowd surfed about six feet to the front railing by the stage where you then get to walk all the way to the back of the Gorge, because you did not die at a Blink 182 concert.

Noelle made it out right after I did. Same method.  Apparently, that kind of near death experience makes you intrinsically loyal to a band.

I’m also a big karaoke girl. Shane Regan and I used to go once a week minimum to sing with Baby Ketten—best Karaoke in Seattle. We’re not as regular about it but I have a list of songs I like to sing that get me pumped. My Childish Gambino “Heartbeat” Pandora station is also pretty solid for the pumping up, although maybe not for the evading of sadness.

I also own all of Taylor Swift’s albums.

The team that you are working with is crucial. If the team you assemble is kickass then the experience will be, onstage and behind the scenes. When I produce and direct, I always say that if I am good at anything it is getting amazing people in a room together. Between SnowGlobed & For Christmas we have over 30 artists collaborating. It is these teams coming together, with their unique talents, skills and perspectives that will make these plays great.

Also. Relevance. I’ve seen a lot of theatre lately that I’ve walked out of and said, “Okay but WHY? Why this play? Why this time period? Why should I give a damn? Why should I pay $10-$50 to be here?” I can’t get my time or money back from those experiences, and neither can our other patrons. Theatre does not have the luxury of not being relevant. Tell whatever story you want, whenever you want, however you want, but make it matter to the world, or at least to Seattle, today.

Ask for the opportunity you want, the worst anyone can say is no, and if they do create your own.

And don’t forget to breathe.