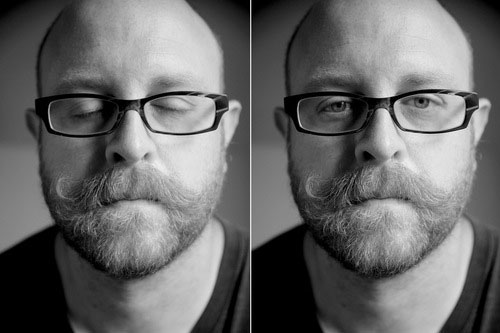 Matthew Smucker is a scenic designer, UW MFA and teacher in the performance production department at Cornish. He’s put in work for Seattle Rep, 5th Avenue, Village Theatre, Intiman and many others. He won the 2011 Gregory Award for Outstanding Scenic Designer, a 2012 Spotlight award and nominations for the 2015 and 2011 Stranger Genius Award in Performance.

Currently his work can be seen in ACT’s “eeexcellent” Mr. Burns, a post-electric play, running through November 15. In it, Smucker deftly conjures a makeshift campsite in the aftermath of an apocalyptic global event, a cobbled-together stage for a travelling troupe of surviving thespians and, in the final act, a post-post-apocalyptic set that transmutes the previous events of the play, imbuing them with scary religious fervor. It’s masterful work.

Next up, Smucker will be working on Seattle Children’s Theatre’s Brooklyn Bridge, opening in Feburary. He joined me for this week’s installment of Five Friday Questions.

I’m biased since she’s my partner, but I can’t help but call out Carol Roscoe’s searing performance in “Intimacies,” the third short story in Book-It Theatre’s adaptation of Raymond Carver’s What We Talk About When We Talk About Love. It was almost pure monologue, visceral and raw, in response to the very smallest of narrative prompts given by her scene partner, Kevin McKeon, and it was perhaps the best balance of Book-it’s signature presentational style with an aggressive emotional naturalism that I have seen to date.

Another scene-specific performance of note is Angela DiMarco’s otherworldly croak as she transformed into a bird in the Umbrella Project’s Knocking Bird at West of Lenin. This was a play filled with so very many moments of disturbing and surprising theatricality (and I expect nothing less from director Paul Budraitis) but Angela’s vocal quality in that single moment may have been the best special effect of the show. That inhuman noise was just so spine-tinglingly weird that I truly do not know how it was made.

The recent performance by a scenic and lighting design that continues to stick with me is Phillipe Quesne’s La Melancolie des Dragons at On the Boards back in September. Lit without conventional stage lights, the scenery discovered by the audience as they entered the space consisted of a stranded sub-compact car and trailer, apparently broken down in a snowy field of quilt batting surrounded by a row of white dusted trees. The world conjured on stage was a Mobius strip of naturalism that flipped over into surreal theatricality that then warped its way back again to embrace the magic of an unforced reality happening right in front of us on stage. Heavy metal stoners meet French performance-art carnies meet a shaggy-haired seven dwarves and their auto-mechanic Snow White. Artaud’s Theatre of Cruelty was placed in a gentle DIY amusement park, with VW Rabbit rock ’n’ roll, fog machines, and dragon melancholia. Awesome and disconcerting and trance inducing, and I wish I could have seen it twice.

First choice is always Pair, Felix and Sarah Penn’s New American joint in Ravenna. Drink the Bijou cocktail. Debate over whether to order the roast chicken or the brisket… or no, maybe that thing they do with the trout? Savor the gigante beans. Splurge on the flourless chocolate cake. One sheet menu with frequent changes and it is all good. If only they were open on Sundays? (hint hint…)

My musical taste runs towards the eclectic, with what seems to be a focus on the literate and wordy and/or the raw and self-taught. Regular favorites include Beat Happening, Tullycraft, The Blow, The Decemberists, The Replacements, and the Modern Lovers.

This past weekend’s household chores soundtrack included such country-tinged songs as Jason Isbell’s “24 Frames,” Frazey Ford’s “Done,” and all the bossa-nova flavored punk and new wave covers that Nouvelle Vague could throw at me.  I am also trying to channel my eight-year-old twins’ frequent demands for Macklemore into an appreciation for late ’80s and early ’90s hip hop, with a focus on Run DMC, De La Soul, and the Beastie Boys. (Professors Fallon and Timberlake have created an engaging syllabus/playlist with their “History of Rap” textbook and viral video series.)

When I am sad, there are really only two musical genres: the cry-it-out or the scream-the-rage. The second category consists mainly of loud, angsty sing-along anthems: The Hold Steady’s “Constructive Summer,” Titus Andronicus’s “A More Perfect Union,“ The Thermals “Here’s Your Future,” The Japandroids’ album “Celebration Rock” and virtually anything fast by the Mountain Goats. (I am loving their most recent pro-wrestling concept album Beat the Champ by the way.)

If bawling is the way to go, Sufjan Steven’s holiday track “Christmas in the Room” will immediately reduce me to tears.

It should have a point of view and a reason to exist. If you don’t passionately care about it when you are making it, why should an audience care?

Don’t decorate it. Anything existing on stage needs to be essential.

And ideally, it should be no more than 90 minutes long.

Thankfully, I am not a performer. (Although if you dig back far enough in the archives, there exists some Glee-style swing choir and Shakespearian emoting in my deep dark history. I am still hopeful that no existing fragments of VHS-taped proof will ever be digitized.) But the best performance advice I’ve heard was given to my late wife Andrea Allen when she was in high school, and she quoted it often: “If you continue to sit like that on stage, people can totally see your panties.”