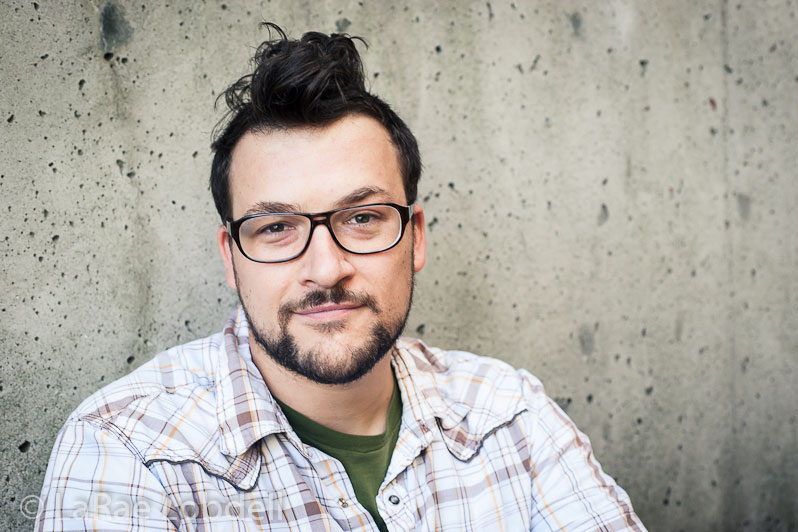 Matt Starritt is a Seattle-based freelance sound designer for theatre and dance. He just finished a run of three consecutive shows at the Rep’s Leo K. Theatre as part of a design supergroup. You might have also heard his stellar work for the Intiman’s Angels in America, which was subtle, decisive and flawless.

Starritt’s done sound design for just about every major theatre house in Seattle as well for drag artists like Waxie Moon, BenDeLaCrème and The Cherdonna and Lou Show. He’s a part-time lecturer for the UW’s School of Drama and was a founding member of Washington Ensemble Theatre. His dog, Rocket, is something of a local theatre veteran as well. Starritt is currently working on Book-It’s eagerly anticipated Slaughterhouse-Five. He joined me for this week’s installment of Five Friday Questions.

I was absolutely blown away by Ahamefule Oluo’s Now I’m Fine, which was at On the Boards in December. It was like nothing I’d ever seen before; an amazing blend of storytelling and music. The musical instrumentation and arrangement was incredible. The interplay between the band, the string section, Soulchilde’s voice and Aham’s stories was super well-balanced. Theatrically honest. Delightfully easy to watch. There were so many amazing performers up there on stage, and I was stunned by how generous everyone was able to be with each other.

Well, I love to cook. And with the weather as nice as it is, it’s pretty hard to beat our porch. Friends, drinks, meatballs. What could be better? Also, I’m a little obsessed with the pizza and beer at Masonry in Queen Anne.

I just designed an Irish show at the Rep, and I went back through some Irish music. I think it’d been five years (the last Irish show I designed there) since I listened to The Pogues album, Rum, Sodomy and The Lash, and I’d forgotten how good it is. Both for getting pumped up or while you are sad. I’ve also been listening to a lot of Talking Heads. I think because I heard a cover somewhere and a little bit of it got stuck in my head. I spent a while trying to figure out which song it was, then just left the dial there.

Well, the sound of course! Seriously, though, I do think that it’s really important that everyone starts and ends on the same page. There’s nothing worse than watching a production where everyone is working on a different version of the show. When the lights and sound don’t talk to each other, and the costumes and scenery live in a different worlds. On the other hand, it’s spectacular when everything is meshing really well and a totally new cohesive theatrical world is born.

I think Rich [Bresnahan] mentioned this last week, but being good to work with goes a really, really long way. Theatre is hard anyway for a lot of reasons, so being a collaborative and generous member of the team might actually be the most important thing.