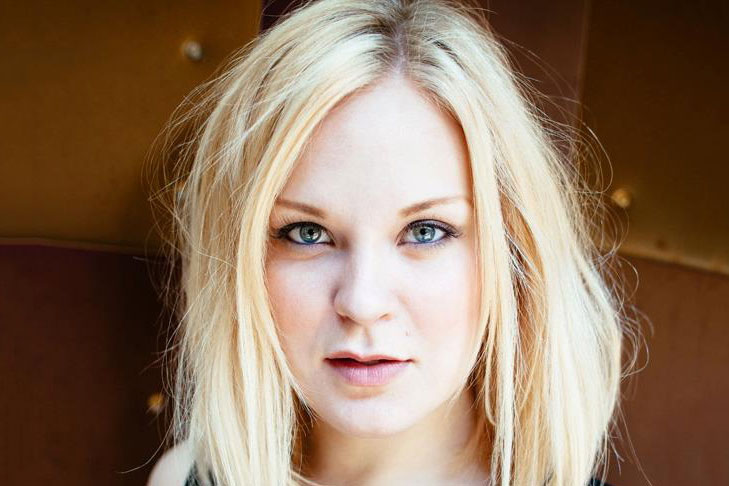 Kirsten deLohr Helland is an actor, singer, Gig Harbor native and Pacific Lutheran University theatre grad. At PLU she became inseparable friends with Justin Huertas, forming an artistic partnership that would find its culmination in Huertas’s Lizard Boy at the Rep. In the play Helland plays Siren, a rock singer who slinks forbiddingly in punishing stilettos and engages in inventively staged superhero combat using musical instruments for weapons. For the show she learned to play piano, guitar, glockenspiel, melodica and many others, but her most compelling instrument is her voice: powerful, clear and brazen.

Helland also collaborates with Huertas in the folk-rock duo Hanschen & Ilsa. Currently, she’s playing Rizzo in 5th Avenue’s Grease and on August 10 she’ll sing some of her character’s songs in the latest installment of Brandon Ivie and RJ Tancioco’s popular New Voices project (see her previous performances here, here and here.) Helland joined me for this week’s installment of Five Friday Questions.

We just started previews for Grease at 5th Avenue Theatre and we have the amazing Dusty 45s as our onstage Rydell High School Band throughout the show. They have a kick ass preshow that blows me away and makes me wish I played any instrument that would get me into the band. The Dustys are a Seattle based rockabilly/blues/swing band that in seconds are able to transport you from 2015 back to The Good Ol’ Days. The entire crew is charismatic and mesmerizing in their energy and style. The music is on point, high energy, and makes you want to get up on your feet and dance all night long. If you come to Grease, make sure to come early to catch these guys. And don’t be afraid to get up and dance, because that’s exactly what the entire cast is doing backstage every night.

It’s been a while since they closed but the LBJ plays at Seattle Rep (All The Way and The Great Society) are still on my mind. I don’t think I’ve been on the edge of my seat like that at the theatre in maybe my whole life.

It doesn’t even matter what you order, Belltown Pub is awesome. I would go there for breakfast, lunch and dinner if the owner would give me stuff for free. (I’m talking to you, Dave.) The menu is classic and creative pub food with a Seattle twist. The atmosphere is chill, outdoor seating is a summer bonus, staff is awesome, and the happy hour can’t be beat. Go, enjoy and no matter what, get the mac and cheese balls.

Also, I will always be a forever fan of 5-Point Cafe. Their Bacon Beat Egg burger is all things great. Make sure to get their tots, because… Why get fries when you can have tots? It’s absolutely a dive and it’s perfect. Small bathrooms with graffiti everywhere, a jukebox, loud music, cozy seating, all day breakfast, outdoor seating (I will watch vulture style until there’s an empty table).

If you consider drinking a cocktail the same as consuming a meal, check out Bathtub Gin. It’s a cozy bar hidden away down an alley. Delicious drinks all around, but my favorite is Dealer’s Choice. Pick an ingredient or two, some descriptor words, and wait. I’ve not been disappointed. If you don’t like crowds, or waiting, go early. And if you don’t like the heat, don’t go in the summer. No air conditioning. More room for me.

I am really into Postmodern Jukebox right now. Current radio hits turned vintage. Give me that All Day Long. Two songs I listen to almost daily are their covers of “Fancy” and “All About That Bass.” Otherwise my pre-show-pump-me-up music ranges from People Eating People, Alanis Morissette, Bella Ruse, Rufus Wainwright, Walk the Moon, Pink, Mika, Civil Wars all the way to Disney (when I’m feeling really saucy). And of course the top of my pump-up playlist is “Uptown Funk.” When I’m sad I listen to my “I Am Sad Right Now” playlist. Yes, that’s real. And I won’t share because a lady has to have some secrets.

Teamwork. It sounds corny I guess but it’s so easy to fall into the world of Me, instead of the We. As the Great Poet once said, “We’re all in this together.” There are principals and supporting actors and ensembles but if one actor goes into a production thinking they are better than the other or thinks they should have been cast in a role instead of so-and-so, what kind of energy does that add to the production? Be proud of the energy and individuality you bring to a production but have the backs of your fellow castmates and community.

Be true to who you are as human, as an artist, as an individual. Don’t try to copy what other actors have done before you. Watch, listen and learn from those who’ve been successful before you. They’ve been doing this whole theatre thing longer than you. Ask for advice. Watch as much theatre as you can.

“If you don’t try, you will regret it.” Brian Desmond, my mentor and professor, said this to me twice during my years at Pacific Lutheran University. Once as a freshman when I had hesitations about auditioning for the spring musical and once right before graduation when I said I wasn’t sure moving to Seattle/being an actor was a good idea for me. “If you don’t try, you will regret it.” I ended up auditioning for that musical. That musical reminded me how much I love theatre. I ended up moving to Seattle and was cast in my first professional production a few months later. I think about his advice all the time and how right he was.