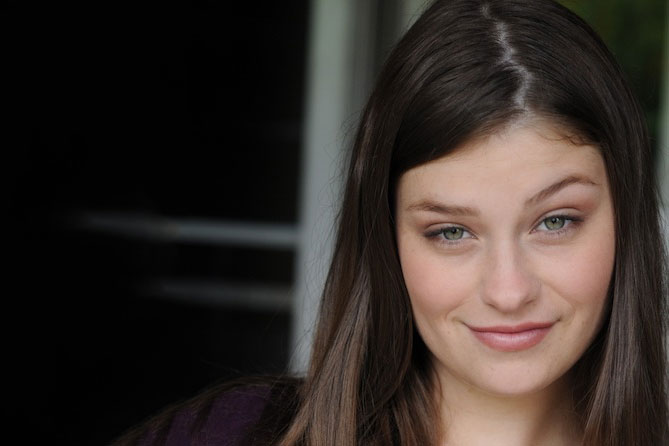 Hannah Mootz is an actor and Cornish grad who’s performed at Seattle Shakes, Washington Ensemble Theatre, Seattle Public Theatre and many others. City Arts described her work in 2013’s Bo-Nita, a one-woman show at the Seattle Rep in which she played seven different characters, as a “powerhouse performance.” You might’ve seen her most recently in The Children’s Hour at the Intiman.

Mootz is a member of the Seagull Project, with whom she’ll appear in next year’s The Cherry Orchard. She’ll also be in New Century Theatre Company’s The Big Meal this fall. Currently she’s rehearsing for Luna Gale, running March 4 through 27 at the Rep. Mootz joined me for this week’s installment of Five Friday Questions.

Constellations at Seattle Repertory Theatre. The honesty and vulnerability was palpable. The story hit me hard. And as far as the actual actors’ performances, the strong technique and visceral truth on stage is something I aspire to. Also, I recently re-watched The Best of Chris Farley on SNL. His comedic-genius soul is so heartwarming.

Well—unfortunately I’m unable to eat out ANYWHERE! Due to an auto-immune disease, I’m on an almost farcically limited diet. I haven’t dined out in over two years. But I will give a shout out to the café I work at, because I know firsthand that Nollie’s Café in South Lake Union uses only fresh ingredients, house roast their meats daily, and home make all their baked goods and treats. I live vicariously through my customers who come in for great food that I truly stand behind. I, myself also make a damn good almond butter that I could probably sell at restaurants.

My favorite artists to listen to when I’m getting ready or am going for a run: Wale, J Cole, Purity Ring, Jhene Aiko, A$AP Rocky, Alt-J, and Ben Howard.

The artists I listen to when I need to emote by myself, and they help sing me through it: James Vincent McMorrow, Matt Corby, Keaton Henson, Bon Iver, Daughter, and more Ben Howard.

Also, I love productions with characters who ask the audience to question their judgments as well as their allowance for empathy.

This career is a roller coaster, so learn to embrace every aspect of it. The highs, the lows, and the steady goings. Everything’s a gift, you just got to find it.