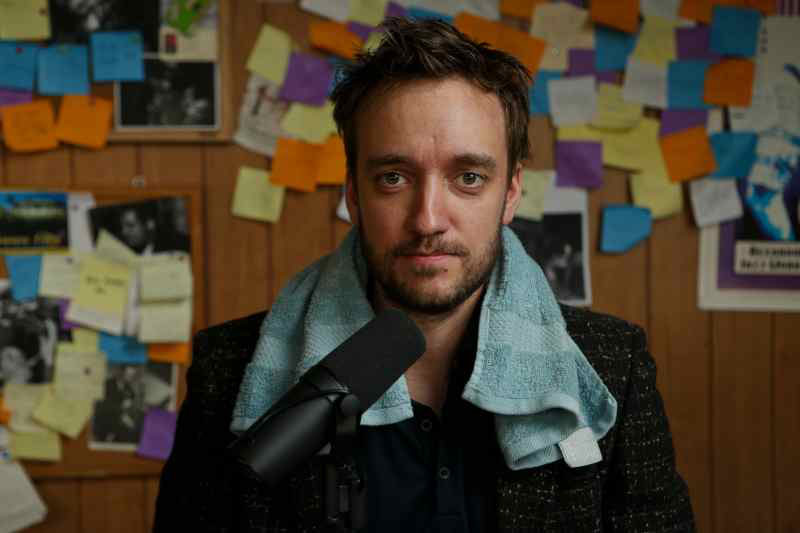 In his solo show The Holler Sessions this month at On the Boards, Frank Boyd plays a radio DJ ranting and grooving live on the air to great jazz. Have you heard a more intriguing and appealing show concept lately? Boyd played Joe Kavalier in last summer’s Book-It world premiere of The Amazing Adventures of Kavalier and Klay. He’s a member of New York’s Elevator Repair Service, where he performed on their critically regaled Gatz. He’s also a member of NYC’s the TEAM, with whom he partnered to produce The Holler Sessions. He keeps busy. (Check out Gemma Wilson’s excellent feature on him over at City Arts.) Boyd is voluble and passionate about music and performance. He joined me for the year’s first Five Friday Questions.

Industrial Revelation. That’s one of the best shows I’ve ever seen. It was so good that after the show I didn’t even want to talk about it, especially not in terms of genre or style or any of that stuff we say after a show. For me it floated above all that and it still does. Even calling it a concert feels weird. I was watching D’Vonne, Aham, Evan and Josh just be up there as much as I was listening to the music.

It seemed to me like they were not trying to be cool or be successful or even be good up there. I think it ran much deeper than that. I don’t really enjoy watching performers hit their marks, so to speak. I’d much rather watch somebody who’s really involved with something, really in the middle of something. And a part of that means the performer is not always totally conscious of exactly where they are going. For me, that’s what it means for a performance to be alive. And those guys are of course highly skilled in technical terms too. In that combination is where the good stuff lives.

And Lisa Kudrow on The Comeback. That is some thunder time right there. Kudrow is also credited as a creator, writer and producer of the show. She has so much game. Valerie Cherish should go down as one of the iconic characters of our time. I think she says a lot more about our world right now than Don Draper or Walter White.

What’s the best restaurant in Seattle?

“Best” is tough. The only thing more subjective than theater might be food. I’ve been to Brimmer & Heeltap a few times recently and that place is tasty. Although I don’t care for the name. There are a lot of “&” names going around right now.

Oh! That taco truck on 15th Ave NW and Market St in Ballard in the parking lot of the Shell station is very, very good! I think it’s better than El Camion and it’s definitely cheaper. And you can watch Telemundo in a heated shanty-like structure.

Freddie Hubbard’s “Blue Frenzy” has been getting me real pumped up. So has Cannonball Adderley’s “This Here.” Those recordings are infectious, pulsating, bluesy and wide awake. I don’t know what I would do without them.

That Cannonball record, the live recording in San Francisco, is an all-timer for me. Cannonball was incredible. He’s got just as much game as any of the great sax players of that time in my opinion, but for whatever reason he never quite obtained the stature of Bird or Coltrane. Cannonball really had his shit together. He always played sober. Maybe this has something to do with it; he didn’t have the tragedy cred that those other guys had—and that people have since foolishly romanticized.

When I’m sad it depends. Sometimes you wanna keep going down you know? Esther Phillips’s “No Headstone On My Grave” comes to mind. Watch out. Use with caution.

Also Magnolia Electric Co. That is some beautifully sad and lonely stuff. Jason Molina was a gifted songwriter. He passed away in 2013. “Hammer Down” is pretty much a perfect 3 minutes. And “The Dark Don’t Hide It” is also a favorite of mine. Anything from that album really (What Comes After the Blues).

What’s your strategy for coping with the long Seattle winter?

Oh man I’m still experimenting with that. Winter sucks. The short days are the hardest part. Although drinking coffee in the dark feels pretty cool to me. I’d like to start doing a week in Cuba to break up the gray, but it doesn’t sound like Marco Rubio is gonna let that happen.

The central importance of listening. That’s the ballgame. If I don’t listen, truly take in, nothing else really matters. I wish theater was more like the NFL in that way. You know: if we don’t have a real awareness of what’s happening around us at any given moment we run the risk of being obliterated by a 300 pound human sledgehammer. That would encourage listening. And at the end of the day it’s easier that way. It’s a lot less work to let the people I’m up there with affect me than it is to drum all that up by myself. This sounds simple but it’s very difficult. I think it can take like 20 years to get really good at this.