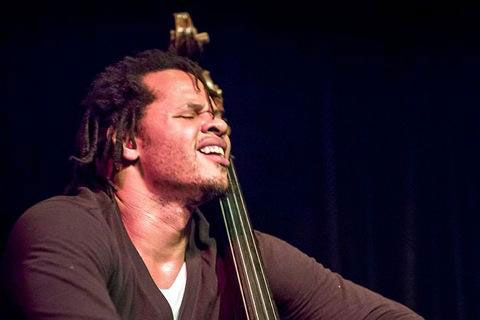 Evan Flory-Barnes is a bassist and composer who’s been making music since his Garfield High days, where he was a part of the school’s celebrated orchestra. Now he’s the bass player of Genius Award-winning Industrial Revelation, with whom he played on bandmate Ahamefule J. Oluo’s triumphant Now I’m Fine at On the Boards last winter (and which they’ll be restaging at the Moore next April). That critically acclaimed show has been shouted-out by more 5 Fri Q subjects than any other production in the past year.

I’ve seen Flory-Barnes play on numerous occasions, from Industrial Revelation’s rocking set at this year’s Capitol Hill Block Party to jazz sessions at the Royal Room to a moving piece he played at the #BlackLivesMatter Pecha Kucha event last January that left the room in tears.

Heedless of genre, Flory-Barnes communicates a passion for the act of making music and never fails to inspire me with head-nodding goodwill. He joined me for this week’s installment of 5 Fri Q.

What’s the best performance you’ve seen lately?
That’s a tough one cause I watch and see so much. A lot of folks have said Ahamefule J. Oluo’s Now I’m Fine, which I was a part of so I can’t say that. But it was pretty amazing despite him being such a one-dimensional artist (I kid). Even though we have begun the new football season last year’s NFC Championship against Green Bay was magical and powerful. I was tearing up.

The best meal? Don’t know if it still is but anything from Paseo is amazing. A chicken sandwich and a bowl of beans and rice. Anything from El Camion is ridiculous. Fresh, down home and cheap, especially for the ingredient quality. The food at La Medusa in Columbia City is great. And I am big fan of the food at Cafe Paloma in Pioneer Square. Oh, anything from Tacos Chukis.

What just came to mind are sandwich/coffee combos. Getting a pulled pork sandwich at Manu’s Bodega in pioneer and then heading across the street to Caffe Vita. Or getting any sandwich from Paolo at the Beacon Ave Deli then heading to The Station. Or going to Paseo and then heading to Lighthouse Roasters on Phinney Ridge.

Man, I love the song “Atlas” from the band Battles’s first album Mirrored.

The track “Love” off J-Dilla’s The Shining gets me pumped up, so does “Welcome to the Show” off Donuts.

When I am sad, I listen to Rachels’ Music For Egon Schiele. That album has a feeling that creates a brightness out of the sadness while it still is there. And there’s so much other music I call on it is hard to say.

Having those involved feel super invested on some level in the work. Now I’m Fine was so powerful because the majority of the folks involved have been playing that music for the last seven and a half, eight years. The music draws up emotions that make it easy to invest in emotionally.

When there is that communal vibe and emotional investment and a good amount of money is brought to the table it feels like a bonus instead of the “why” of the production. Don’t get me wrong, I love getting paid and I love paying people but when people are passionate about the piece itself the work goes to new heights and depths.

One of my first gigs near the end of college was with great pianist, musician and composer Jovino Santos Neto. Through his example he emphasized something that I always knew was important, which is to always bring the joy, energy and intensity no matter what. Jovino would play in a McDonald’s parking lot for two people with equal passion as he would for a McCaw Hall of 3000 people. That has always stayed with me.