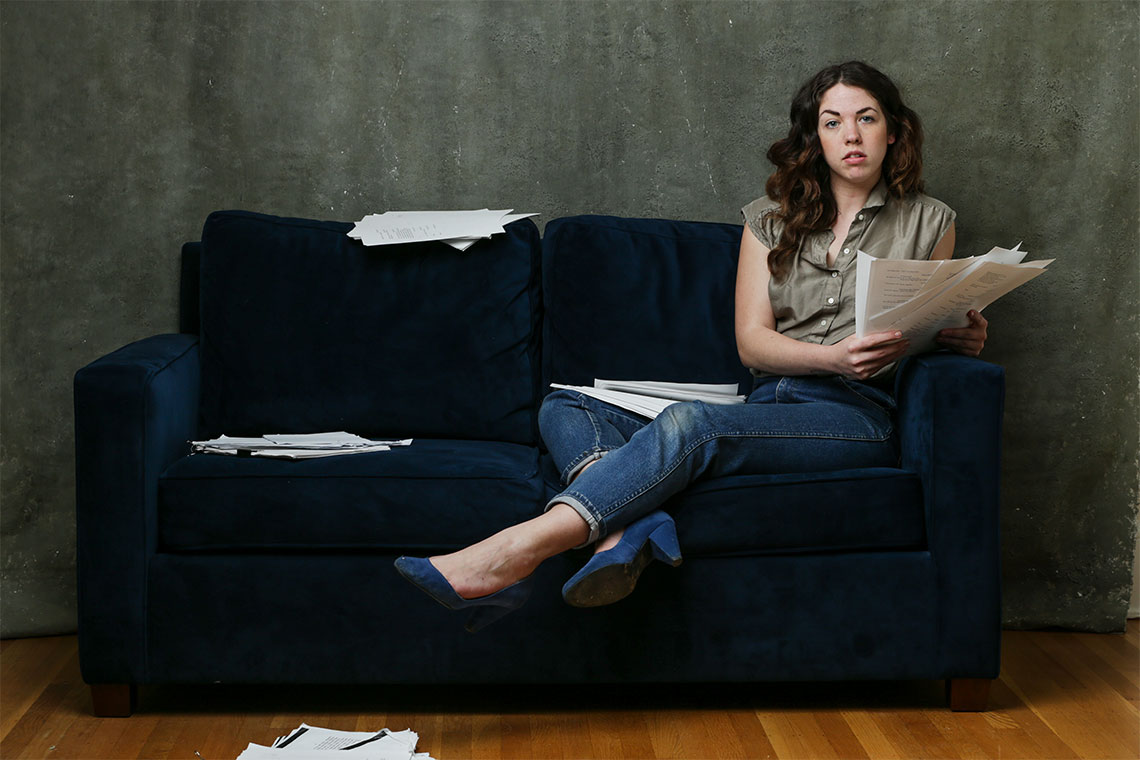 Erin Bednarz is a multi-disciplinary theatre artist from Minnesota who’s been in Seattle for eight years and worked with over 19 local theatre companies. She’s a founding member of Umbrella Project, a company member of Live Girls! Theater and a producer, actor, dramaturg, director, former front-woman of riot-pop band Hearts Are Thugs, and most recently a sound designer.

Currently, she’s working as resident sound apprentice for Intiman’s Stick Fly and next week she’ll be doing sound design for Strawberry Theatre Workshop’s 9 Circles. In July she’ll serve as assistant director for Things You Can Do with LiveGirls! Theatre at ACTLab, and in August she’ll be in Girl, a devised ensemble adventure at Annex Theatre. Bednarz has a busy summer ahead. She joined me for this week’s installment of Five Friday Questions.

In March I attended Citizen University, a conference to encompass the work of community building and teach leadership in civic life. The closing panel discussion was between the executive director of Teach for America in St. Louis, the executive director of the Detroit Department of Health, the associate director of the School of Social Transformation at Arizona State, among others. Seattle’s Eric Liu moderated the panel speaking on “What Do We Do Next?” as a country and, more importantly, as a room full of citizens. Listening to each of them speak about the current state—or dismay—of their place within our country was the most theatrical performance I’ve seen all year.

When I first moved to Seattle I spent a lot of time working in restaurants. The chef who raised me up and completely changed my knowledge of food is Chef Charles Walpole. His restaurant, Blind Pig Bistro on Eastlake, is everything. The menu changes every day based on how the chefs are feeling and you always have the option to order the entire menu. THE ENTIRE MENU. You guys. Plus the servers know what they are doing and the wine list is extremely well put together. Also, you won’t break your bank. This place changes lives.

I am what you would call a Spotify-aholic. Self proclaimed “Queen of the Playlist,” I am all up on creating different lists for different moods. Currently, I’ve got “Vroom Vroom” by Ishawna on loop when I’m getting ready to go out (if you’re looking for a companion to Rihanna’s “Work”). Another killer lady-anthem of the trip-pop persuasion is “Gold” by Kiiara. Try and listen to it less than three times in a row. I dare you.

That being said, give me a Sunday morning in my pajamas sipping french press coffee in my studio and spinning my vinyl of Steve Miller Band’s Greatest Hits and I’m the happiest girl on Capitol Hill.

One album I just can’t stop listening to, sad or otherwise, is Psychic Reader by Bad Bad Hats. For all of you who’ve listened to the soundtrack to 10 Things I Hate About You more times than you’d care to admit, this Minneapolis band is giving all of the Letters to Cleo vibes you’ve been longing for.

If we’re putting it all out there then I’m going to be honest. Whenever I’m down in the dumps, feeling the pressure of the day-to-day just a little too much, I go back to the tunes that soothe my junior high self. That’s right, the Jason Mraz comes out. It’s just me & Mraz, singing at the top of our lungs, working it all out together.

Communication. I am of the tribe that theatre is storytelling, and in order to tell the best tale we have to make sure the lines of communication are open. If we’re not all working toward the same version of the same goal it’s going to be apparent in the outcome. As we become comfortable speaking our minds and have true mutual respect for one another, we have the opportunity to make magic. That, and I’m always striving for good vibes. To be frank, most of us are not financially supported enough by this industry to be having a bad time making art. Make it a party or don’t make it at all!

Don’t waste any time feeling like you don’t belong, or that you don’t have a voice. There are certain things about you that make you you, and that’s where your voice lives. Speak up! Also, do what you can to make theatre with the artists you’re equally the closest with and the most challenged by. You’ll be better for it. And never, ever, stop listening.