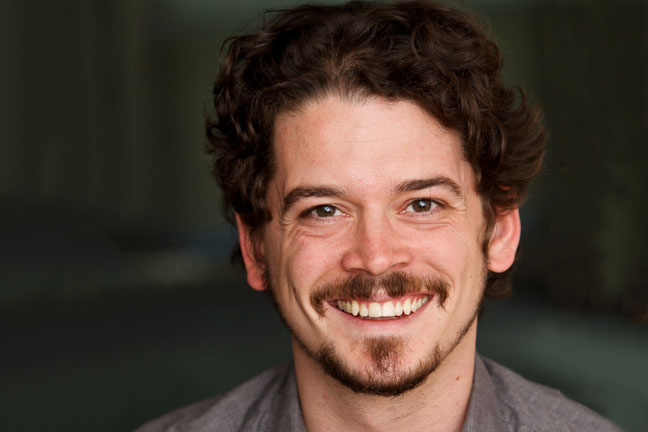 Connor Toms is an actor and Cornish grad who just finished a run in New Century Theatre Company’s outstanding production of Festen. He played Christian, an adult son confronting his sexually abusive father at the patriarch’s 60thh birthday party. His performance in that brutalizing role was agile, visceral and nuanced. By its final act the play conjured fist-pumping catharsis, a rare affirmation of both theatre and humanity.

Simply put, Toms is one of Seattle’s most compelling leading men. He’s worked at Seattle Shakes, Seattle Rep, Book-It and many others around town. Next he’ll be playing Trig in Stupid F*!#ing Bird, Aaron Posner’s modern deconstruction of Chekhov’s The Seagull at ACT Theater.

He joined me for this week’s installment of Five Friday Questions.

OBAMA. The man’s been KILLING IT lately. I doubt this is an appropriate forum for a political diatribe, so I won’t pontificate about how honored I feel to be alive during the tenure of a president who leads with a graceful intellect, a refusal to submit to reactionary obtuseness and a truly humbling patience.

So instead, have you seen the video of Prince playing his cover of Radiohead’s “Creep” live at Coachella?!!?? It blew my mind! Prince has a supernatural ability to take already great songs and turn them into guitar-god-religious-experiences. Stop what you’re doing. Go watch the live versions of his cover of Radiohead’s “Creep,” his guitar solo in George Harrison’s “While My Guitar Gently Weeps” at Harrison’s Rock & Roll Hall of Fame induction and his own updated “Let’s Go Crazy” at the American Music Awards. You can thank me later.

After years of practice at being too lazy to cook for myself, I can proudly say that I have many answers to this question. Here’s what I think:

Thai: Thai Tom. I go every year on my birthday as a present to myself.

Greek: Plaka. Also in Ballard. Sit at the counter and watch the cooks. Best show in town.

Burger: Wanna Teriyaki and Burger. Looks can be deceiving. I thought it looked like any other teriyaki joint. It’s not. It’s burger heaven.

Phở: Than Brothers. Why mess with a classic? If it ain’t broke, don’t fix it. Medium #9 with a side of veggies.

Seafood: The Walrus & Carpenter. Who cares if you have to wait in line?  IT’S WORTH IT.

Speaking of Prince, you want to get a party started? Put on Purple Rain then get out of the way.

If I’m needing a pick-me-up I usually go for loud and fast. At the Drive-In, Pearl Jam, The Toadies. I still listen to Nirvana’s Nevermind regularly, as well as PJ Harvey’s Stories From the City, Stories From the Sea, Smashing Pumpkin’s Mellon Collie and the Infinite Sadness, Radiohead’s The Bends.

When I’m sad I go straight to Mel Brooks and Carl Reiner’s The 2000 Year Old Man. Not a song, I know, but it’s the perfect cure for the blues.

Those two took sitting around riffing off each other and turned it into an all-time classic. Brilliant stuff. There’s a great story that George Burns saw them do that routine at a cocktail party in the late ’40s at Jack Paar’s house and said, “Boys, if you don’t make that routine into an album I’m going to steal it from you blind. You have a month.”

The stage manager. Sadly, stage managers don’t get enough credit in this unfair world, but the success or failure of a production LITERALLY rests on the stage manager and their crews. The unseen hands, the unheard calls, the invisible ghosts that inhabit backstage, the Great and Powerful Oz pulling strings behind the curtain. The average audience member has no idea that the actors onstage are more often than not, completely useless morons that need someone to tell them where their props are, where their pants are, when they’re expected to be onstage and not playing Guitar Hero in the green room. I know those examples sound specific—I’m sure I have no experience with any of them whatsoever. (God bless you, stage managers, one and all.)

If you’re not enjoying yourself, you’re doing something wrong; it’s called a “play” for a reason.