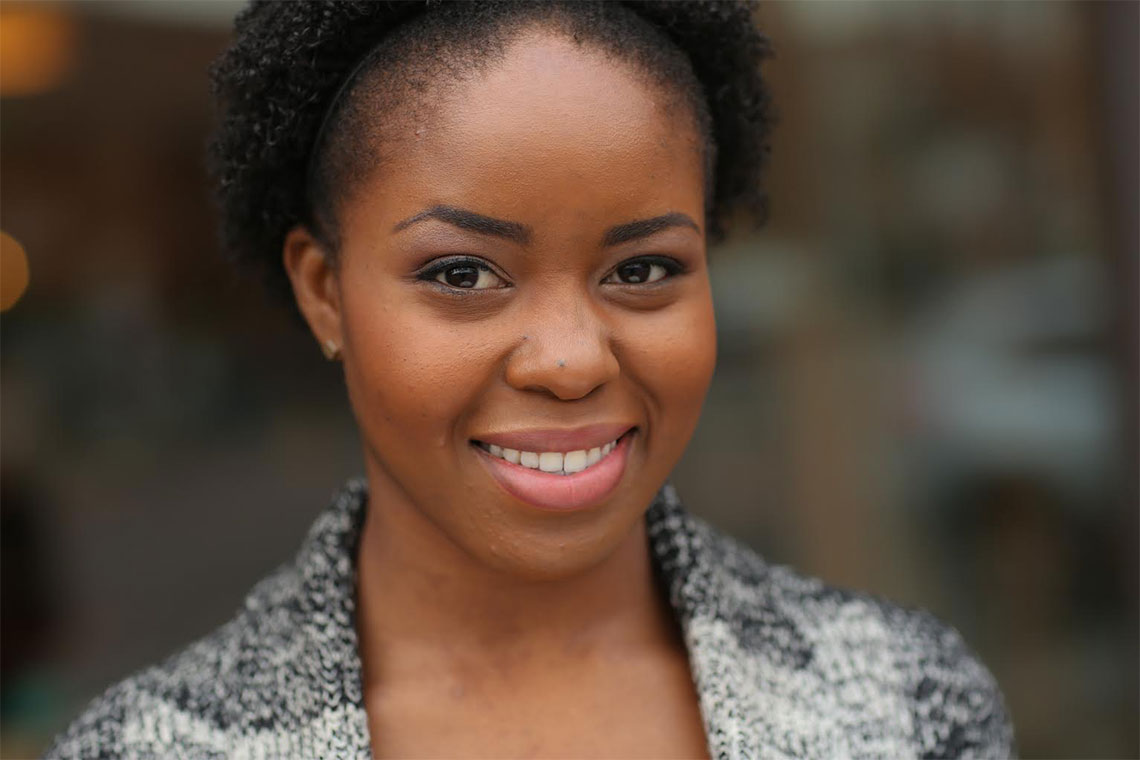 Claudine Mboligikpelani Nako is an actor who’s been working in Seattle for the past three years. In that time she’s graced the stages of Village Theatre, ArtsWest, Seattle Public Theater, Washington Ensemble Theatre and Seattle Musical Theatre and won the 2015 Gregory Award for Outstanding Lead Actress in a Play for her portrayal of the title character in Book-It’s Little Bee. More recently, she played the roles of Colleen and Itchy in ACT’s stellar Mr. Burns, a post-electric play. This coming spring she’ll play the lead role of Efua Kuti in Village Theatre’s world premiere musical, My Heart is the Drum. Nako joined me for this post-Thanksgiving installment of Five Friday Questions.

I finally got around to watching the 2007 film La Vie en Rose about the life of French singer Edith Piaf. It was gorgeous. Marion Cotillard’s portrayal of Piaf was thoughtful, complicated, and fearless. I see why she won the Oscar for that performance. I was also really impressed with the girls who played younger versions of Piaf. They were so emotionally keyed in. It was beautiful.

Also, Fred Armisen in Portlandia. He is one of the most interesting performers on television. His brand of comedy is so weird and I can’t get enough of it!  Instead of the sort of broad overdrawn caricatures we see in a lot of comedy, he plays these subtle character ticks—a slight stutter, a nervous laugh, intense eye contact, etc. and exaggerates them just enough that it’s absurd and hilarious, but not so much that we can’t look at the character and instantly recognize them as a completely familiar “type.” He doesn’t even change his voice that much from character to character, but the physical nuances he takes on in different costumes make each character so distinct. I think he is a genius!

I don’t eat out enough to answer this!  I’d say the best meal is whatever I’m whipping up in my kitchen that day. I’m a great cook! As for the restaurant scene, I did have a killer meal of blue cheese meatloaf and horseradish mashed potatoes downtown at Sullivan’s the other day. We had an early student matinee of Mr. Burns at ACT and I had time to kill until the evening show. I hate blue cheese, but I wanted to try something new so I ordered it and it did not disappoint. SO delicious.

I don’t listen to music all the time, but my taste is pretty eclectic. I love singer/songwriter Brandi Carlile. Her voice has this lovely break to it and her lyrics run deep. I’ll listen to her if I want something chill.

For the gym or some sweet car dancing, I love Stromae–especially his second album Racine Carrée. He is a very unique artist of Belgian and Rwandan descent who sings in French. His music is sort of electropop disco with African influence and very clever lyric play, and his voice is gorgeous. He has played Seattle twice this year and I’m sad to say I’ve missed both performances!

For pure joyful nostalgia, I love African music. My family is from Democratic Republic of Congo (formerly Zaïre), and I grew up listening to the music my parents brought with them to the U.S.: Papa Wemba, Tabu Ley Rocheareau, Franco, Kofi Olomide, etc. The genre (I know now) is called “Congolese rumba” or “Soukous,” but to me it’s the soundtrack of my childhood. I just listened to Abeti Masikini’s “Je Suis Fachée” on YouTube and danced all over my room. I LOVE that song so much! We used to blast that record at home when I was little. It brought back really good memories!

Listening. An audience can tell instantly if actors are listening to each other or if they are just eagerly waiting to say their lines. When everyone is listening, the space between is electrifying. And it’s not limited to literal listening with one’s ears. When the designers and the actors are all listening to the story well, everything else become clear. You know whether a footfall heard offstage should make you jump with excitement or terror. You know if a character should wear rough, rigid fabrics or soft, worn ones. You know if a scene should be lit with warm ambers or cold blues. Listening is everything in storytelling.

How to take notes. I think the biggest downfall for a lot of actors, no matter how old you are or how much experience you have, is the inability to take a note.

When I was in school, one instructor taught me that when you’re given a note you say “okay” and you try it. If you don’t understand what the director is asking or you disagree with the choice for your character, ask for clarification, but always try it.

When actors get super defensive in note sessions it makes me cringe. I mean, we’re all neurotic and our egos get a little bruised when someone tells us our choice is not working, but this is why we have outside eyes to guide the process. Sometimes the director is dead wrong about something, but it’s still worth it to try a different tactic in an effort to tell the story more clearly. And more often than not, even if you really disagree but they are insistent that you do things a certain way, you can eventually nuance the choice to satisfy both parties.