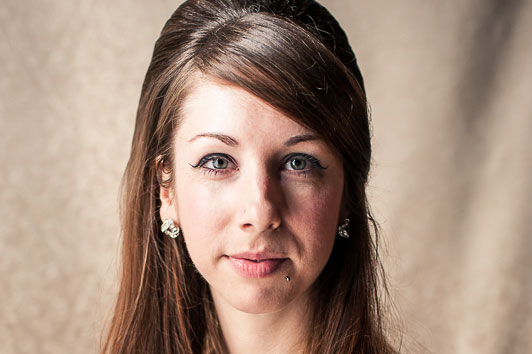 Chelsea Cook is a freelance costume designer, shop manager and Cornish grad. Her work has been seen at Book-It (including this past spring’s The Dog of the South), Village Theatre, ACT, Washington Ensemble Theatre and many more. Additionally, she’s building theatre’s next generation of artists through her company Little Hands Creations, which teaches sewing and crafts at local elementary schools and in weeklong summer camps. Continuing our run of local designers and tech wizards, Cook joined me for this installment of Five Friday Questions.

It feels awful to admit that most of the time, I don’t see nearly as many shows as I should. After spending countless hours in a cocoon of a theater, forging a show, it’s so hard not to just relish in my newly open summer evenings.

That being said, Valerie Vigoda blows my mind with her performance in Ernest Shackleton Loves Me.  I designed that show so it may be a conflict of interest, but the amount of technical artistry she uses to create music tracks live onstage every performance is pretty amazing.  She loops in violin tracks, and adds drums and bass and horns and then plays and sings over all of it.

In terms of performances that I’m not totally biased towards, I think the majority of Seattle can commend Lizard Boy at the Rep for being kick ass. After working in this industry for so long, I sometimes wonder if I can truly enjoy a show after just watching it once. I’m so used to being instrumental in its production, that I don’t even know what it’s like to just get once shot at digesting a show. What if I can’t hear all the words!? What if I’m not paying close enough attention and I miss an important part of the plot?? Not a problem with Lizard Boy. The music and creative use of sound and instruments—every part of it was riveting—and although I wish I could have seen it again, it’s not because I didn’t absorb it on the first go.

Also—gotta give a quick shout out to the LARPers in Volunteer Park last weekend. Probably one of the most captivating performances I’ve seen in a long time.

This is probably the worst question for me, because I love my food overcooked and over seasoned. However, I will say that a Bloody Mary and clams at Ray’s Boathouse overlooking the water is a pretty great way to spend an afternoon.

My life is basically orchestrated by a ’60s girl group. Lately, I’ve been re-discovering a lot of music that I haven’t listened to in a while, like The Julie Ruin, Yeah Yeah Yeahs, Sufjan Stevens, Jose Gonzalez. I recently got my record player working again so I’m working through my Joni Mitchell albums again.

When I’m bummed out, I’ll listen more to Beirut or Belle and Sebastian, and when I’m pumping myself up, it’s usually something really really embarrassing like Fergie’s “Clumsy.” I’m totally going to regret putting that in print.

The most crucial element of a production is trust.  When everyone in the room has built the type of relationship where you can lean on each other, ask for input when you’re stumped or share a thought even if it’s out of your wheelhouse, you can feel the energy in the room change. When I’m working with a group of artists that I trust and respect, I feel better about the type of art that I can create. When lights gives input on costumes, and costumes shares an idea with scenic, and scenic has a thought about sound, when everyone helps problem solve, it’s magic.

What’s the most useful thing anyone’s taught you about working in theatre?

The most useful thing anyone has ever told me about theater is to design without limits. Don’t let a budget number or a lack of resources hinder the ideas. Bold ideas can be simplified but mediocre ideas can’t be amplified.