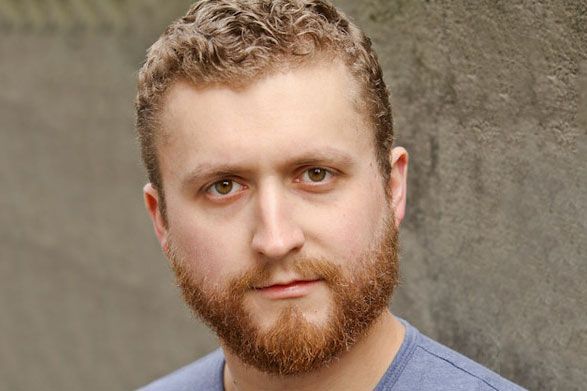 This month McFadden can be seen in MAP Theatre’s production of The Art of Bad Men, written by Vincent Delaney and directed by Kelly Kitchens. Next January he’ll be playing the lead role of Max in Seattle Children’s Theatre’s Where the Wild Things Are. He joins us for this week’s installment of Five Friday Questions.

Initially when I read this question I thought that I would have a standout performance from a play or a movie or a television series (probably Netflix, see Bloodline) locked in my head. But the more I thought about it, the clearer the answer became: the kids.

Let me explain: I have the privilege of getting to teach two separate theatre camps with kids from ages 10–17 at the wonderful Icicle Creek Center for the Arts in beautiful Leavenworth, WA. Each camp is capped with a performance that sums up what we’ve been working on for five days straight and the students are consistently amazing.

I can only equate the energy of the week to a weekend of 14/48: The World’s Quickest Theatre Festival. Both weeks, there’s a moment where I panic and think, “Did we give them too much? Did we ask too much of them?” And the answer is always unequivocally no. Each individual student has so much to offer and it’s so fascinating as a teacher to see the tools begin to sharpen and the gears turn. These are young actors who could be working professionally, if they’re not already. I’m definitely biased of course, but those shows are the best performances I’ve seen lately.

That or the Republican Debate. That #$%@ was entertaining.

I wish I could say I was some expert foodie who’s been to every Tom Douglas and Ethan Stowell, but I just don’t have the time or the money for that. What I do love is lunch, especially a good sandwich. My neighborhood is Capitol Hill, so I highly recommend Scratch Deli, Other Coast Café and Honey Hole. All have a different take on the sandwich and all are delicious. (I especially endorse the turkey at Other Coast.)

Maybe it’s because the radio in my car has been broken for a long time or because I’m just a nostalgic sap, but I still listen to a lot of the same music I loved in high school. For pump-up music, I have to go to Andrew W.K. His music can be seen as just party music, but that’s only one layer. His music is really about inspiration, celebration and inclusion. I’ve seen him so many times live and all he ever wants is to see a group of mostly strangers unite and have fun. Every one of his shows is just a giant party. He’s also quite entertaining to follow online.

I would also be amiss if I didn’t mention Macklemore’s “Can’t Hold Us,” because it reminds me of the 2013 NFC Championship and Superbowl. I picked up an entire bowl of skittles and tossed it in the air. I was finding skittles in the oddest places for months. #GoHawks

I find that a lot of the music I gravitate to could be called “sad music.” The pinnacle of that genre would have to be The Postal Service. And though I can picture little high school Ben crying in his room after having his heart broken for the first time listening to “Such Great Heights” and wearing eye-liner (oh yeah), I think that their first album is still one of the best beginning to end.

I would have to also include local singer songwriter Rocky Votolato; he knows how to sing to those who’ve ever felt heartache.

I actually don’t think that any one thing is more crucial than the other. I think the most important thing for everyone to do—from director to actor to designer—is collaborate. What is theatre if not the most collaborative art form? It’s part of the reason I really love working with Kelly Kitchens. She encourages collaboration and refers to the rehearsal room as “a sandbox.” Not a place to perform, but a place to try and fail and try again. I think that environment in the rehearsal room is essential.  It’s a constant conversation and everyone must be willing to take the story and take the director’s vision and let it inspire them. Make big choices and try something, make sacrifices, kill your babies and try something different, even if it’s uncomfortable. Some of the best work comes when you’re uncomfortable. But it’s also crucial to be a decent human being and someone you like to work with. Always be willing to learn something from every new experience, whether it’s a success or not.

One of the things my Father has always taught me is resilience. My dad was never and will never be an actor (though if you ask him, he’ll show you his Sean Connery impression) but he is a writer. And the life of a writer and the life of an actor are not far different. You’re constantly putting yourself out there and your work is so very personal. He has always said, “Remember, for all the No’s that will come your way, it only takes one Yes.” I’m not sure it only takes one Yes, but one Yes can lead to more Yesses.

It’s so important to not beat yourself up when the No comes. You can let it make you work harder and affect you in a constructive way, but don’t dwell on it. It’s never personal. Because this career choice we have made isn’t easy and will be a bumpy ride, you have to love it.

When my students ask me what’s the most important thing, I always tell them that. Because if you don’t love it, what the hell is the point? Again, my dad introduced me to this quote from Joseph Campbell: “Follow your bliss. And if you do so, you put yourself on a kind of a track that has been there all the while, waiting for you, and the life that you ought to be living is the one you are living. When you can see that, you begin to meet people who are in your field of bliss, and they open doors to you.” I think his thoughts translate perfectly to working in the theatre.