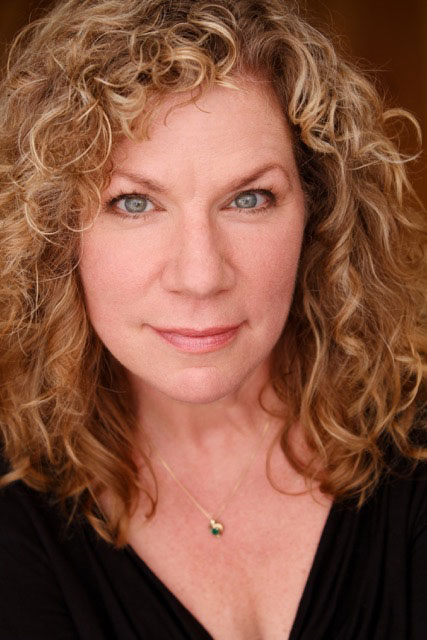 Anne Allgood has been performing in Seattle theatres since 1998. Previously a New Yorker, she appeared on Broadway in Carousel, The Sound of Music and Beauty and the Beast among others, and toured the country with such shows as Evita, Parade, South Pacific and Urinetown. She’s played all the female roles in four productions of previous 5 Friday Q-er Scott Warrender’s Das Barbecü!.  She’s worked at nearly every major house in town including over a dozen productions at both ACT and 5thh Avenue. You might have seen her last year in Intiman’s excellent production of Angels in America,where she transmogrified seamlessly into such disparate roles as a rabbi, the world’s oldest living Bolshevik and a devout Mormon mom.

Additionally, Allgood teaches and coaches, both privately and with The Studios.  She’s about to wind up a summer-long run of Cabaret at Village Theatre, and this coming season she’ll be appearing as Marge Simpson in the hotly anticipated Mr. Burns, a post-electric Play at ACT. Allgood joined me for this week’s installment of Five Friday Questions

I am SO not stealing from Billie Wildrick, I promise, when I say Sydney Lucas, the young Tony nominee for Fun Home. Seeing and hearing her sing “Ring of Keys” was revelatory; I felt like I was witnessing an “old soul” in this art form—I didn’t learn till later that she is only eleven years old and has been playing that part since she was like eight! She is a beautiful, pure example of what I often harp on when I coach song interpretation: Specificity. Discovery. Epiphany.

Also, I confess I am a woefully “bad” theatregoer—there is such a wealth here in town of truly compelling theatre. When I do have an evening at home I crave being actually at home, so I tend to cocoon. I further confess that I, being one of the only people in town who do not care for nor follow football, was utterly blown away by the Seahawks’ bid for glory this past year. Not only an amazing, weird, twisty, nail-biter of a last game, but I was in a roomful of rabid fans: actors at Fifth Avenue during Carousel, who pretty much commandeered a rehearsal room—as well as an extended lunch break—in order to freak out for a few hours. That was one compelling performance!

I feel guilty and egomaniacal saying that my first thought was “my house!” I love to cook. But here’s the thing: we have an amazing food scene here, not to mention a mixology thing that I only get to read and drool about. And it is based on, in part, the smorgasbord living all around us. (The “bad, invasive” things are blackberries? REALLY!?!) When I first moved here two “food” things struck me in a beautiful way: the banners outside what was then Larry’s Market on Lower Queen Anne, proclaiming and celebrating, “THE HALIBUT ARE IN!!!” or something to that effect. But even more importantly, the phenomenon (to this acclimated New Yorker) of people saying, “Let me feed you lunch.” Truly! In New York you “go on dates” with your friends in restaurants. In Seattle (at least in my circle) you invite each other over for grilled cheese sandwiches (or halibut.) My point being, anyone who says “my house” (or “so-and-so’s house”) when talking about a great meal knows that the food is only part of it.  It’s pretty much like theatre: communal, half-rehearsed and half-improv, ephemeral, memorable.

I have pretty eclectic tastes in music, from Gregorian chant to techno-whatever, and yet I find I don’t turn to music as a companion or mood-alterer much. Plus, I think I get really involved in it, and it becomes its own primary focus. Not a job, per se, but certainly demanding of my attention. For a period of several years I couldn’t listen to music that had any words attached, and then finally fully went over to ocean waves and white noise for a while.) So I rarely if ever listen to show tunes and when I’m sad I tend to either call someone on the phone or go outdoors rather than tune into tunes.

If, however, sad means stressed (like, in traffic, or trying to wind down) I might listen to classical music (Impressionist or Romantic) or to something plaintive and sing-a-long-y, like the now-defunct duo The Story or Alison Krause or Shawn Colvin. I am generally attracted to music that’s “complicated”— dissonant harmony rubs, non-square rhythms, lyrics that tell an interesting story (I love Sting for all of these). Again, though, this is front-brain as much as “relaxation,” so if I truly want or need to relax, I find that I crave actual silence—how often do we get that?—or maybe ocean wave sounds. I’m training myself to fall asleep to a tape of ocean waves—good for napping at the theatre between shows!

If I were a person to turn to music when I was sad, it’d totally be Stevie Wonder.  How can you stay sad listening to him?

My super-smart husband immediately replied, “Real-timey-ness.” And that makes sense, right? If we are talking about live theatrical productions then the distinctive, unique element common to all of them is the possible. Anything can happen, because this is happening in real time. Theatre is the original 3D. And it’s risky! What if “the possible” includes, say, the jarring jangle of a cellphone? (Oops, I’m going into Patti LuPone land here!)

The stakes are high and scary, and theatre requires the participation of everyone involved—audience and players alike. That danger, that feeling of surfing in squirrelly water and weather, in company with a different group of people each night who morph into their own mob identity, is what keeps theatre immediate and essential. Also tossing the ball back and forth, not only with that motley crew, the audience, but also with my allies—my fellow invested-to-life-and-death players—and honoring the playwright who created the world we are all pretending to live in. By now it’s getting really intense and meta and layered and unique. Maybe I should have said the original 4D or 5D.

Theatre is about art imitating life, not the other way around. If you don’t have (or make) a life you have nothing to bring to your art. Many people in theatre are what I call “work-monkeys.” They thrive on the business and the networking and the original cast albums and the social media and all of that. And that’s great! But if you are not one of that tribe, it doesn’t make you any less valid as an artist.

Kids, you don’t have to be “obsessed” with theatre—though you do have to be dedicated and passionate. Theatre will take and take and take. It will never say, “You have tenure now” or, “You’ve done enough for today” or, “Take a break.” It will always demand more. So decide what you need to do to renew your commitment to it. For some, like me, it is time away. And that’s perfectly valid and fine, too. I am a hearth-and-home person at heart; I require time in my home, in my kitchen, with my loved ones, in my yard, knitting or doing things with my hands. This gives me balance and breath and I can then re-engage, renewed, with The Work. Find out what your relationship to your art is.  And then nurture that.